The High Court granted conditional permission to Joint Action Committee (JAC) of striking employees to hold a public meeting at Saroornagar in Hyderabad on Wednesday. JAC approached the court after the police denied permission for the same. 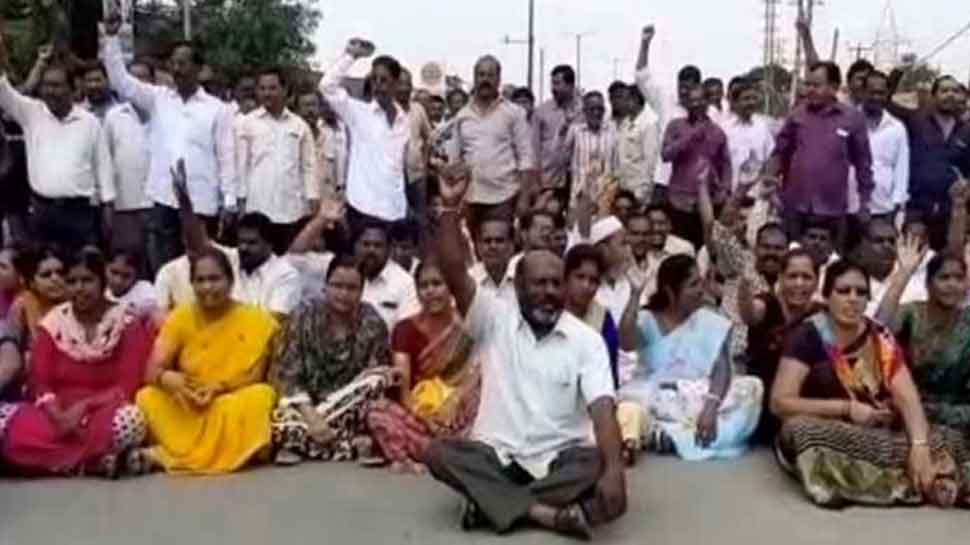 Hyderabad: The indefinite strike by employees of Telangana State Road Transport Corporation (TSRTC) entered 25th day on Tuesday even as High Court allowed them to hold a public meeting in Hyderabad on Wednesday after the police denied them permission for the same.

There were no signs of an early end to the strike by over 48,000 employees of the state-owned transport utility with both the government and the employees sticking to their stands.

The High Court granted conditional permission to Joint Action Committee (JAC) of striking employees to hold a public meeting at Saroornagar in Hyderabad on Wednesday. JAC approached the court after the police denied permission for the same.

The court directed JAC to hold the public meeting from 2 p.m. to 5 p.m on Wednesday. Leaders of the striking employees had invited leaders of the unions of government employees, teachers and workers for the meeting.

Meanwhile, the High Court on Tuesday continued hearing the arguments on Public Interest Litigation (PILs) seeking direction to end the strike. The government submitted to the court it can`t provide Rs 47 crore required to meet some of the demands of the employees, saying it had already given to TSRTC more money than what ought to have been given.

The division bench headed by Chief Justice R. S. Chauhan once again took exception to the stand taken by the government and remarked why it can`t release the money to solve a problem which will provide relief to people of the entire state.

The court also found fault with the manner in which officials submitted only selected statistics while avoiding details of the money the government owed to the Corporation. It directed the government to submit the details by October 31 and adjourned the hearing to November 1.

Earlier, Advocate General (AG) B. S. Prasad informed the court that reimbursement arrears to RTC in undivided Andhra Pradesh were Rs 1,099 crore and out of this Telangana has to pay 42 per cent and Andhra Pradesh 58 per cent. The court was told that the issue of RTC bifurcation was still under the consideration of the Centre.

JAC counsel claimed that in addition to Rs 1,099 crore the government owed to RTC in undivided Andhra Pradesh, the Corporation has not received Rs 1,375 crore towards bus passes subsidy from 2014 to 2019. He said that the government owes another Rs 1,496 crore to RTC under the Municipal Act.

Earlier, Chief Minister K. Chandrashekhar Rao held a review meeting with top officials to discuss the points to be raised in the court during the hearing on PILs.