Terrorists are being trained to carry out operations via sea: Navy chief Sunil Lanba

The Navy chief made these remarks while addressing the Indo-Pacific Regional Dialogue organised in the national capital. 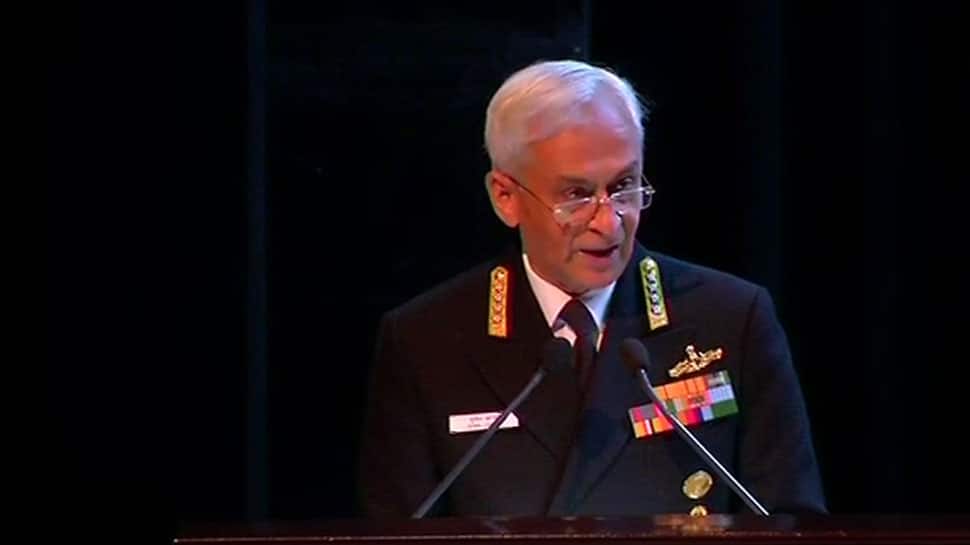 NEW DELHI: Navy chief Admiral Sunil Lanba on Tuesday stressed that terrorism today posed a grave threat to peace and stability across the world and urged the international community to unite in fighting the menace.

''The Indo-Pacific region has witnessed multiple forms of terrorism in recent years and few countries in this part of the world have been spared by this cause,'' Navy chief Amiral Sunil Lanba said.

The Navy chief made these remarks while addressing the Indo-Pacific Regional Dialogue in the national capital.

Speaking on the occasion, Admiral Lanba said, ''The global nature, which terrorism has acquired in recent times, has further enhanced the scope of this threat.''

The Navy chief stressed that India faces a far more serious version of this state-sponsored terrorism.

''We have all witnessed the horrific scale of extremists attack in J&K, just three weeks ago,'' Lanba said while referring to the suicide attack on a CRPF convoy in J&K's Pulwama on February 14.

Without naming Pakistan directly, the Navy Chief blamed the hostile neighbour for its attempts to de-stabilise India with state-sponsored terrorism.

''This violence was perpetrated by extremists, aided by a state which seeks to destabilise India,'' he said.

Naval Chief Sunil Lanba: This violence was perpetuated by extremists, aided by a state which seeks to destabilise India. https://t.co/dklUTQfL9I

Issuing a warning, Admiral Lanba said that there were intelligence warning that terrorists are being trained to carry out operations in various modus operandi including through the medium of the sea.

Admiral Lanba, however, said that Indian armed forces are prepared to tackle any situation and remain committed to uprooting terrorism in all its forms.

''India's armed forces are fully prepared and will continue to fight the menace of terrorism,'' Lanba said.

Urging the world to unite in fighting the menace of terrorism, the Navy chief said, ''there is a need for countries to evolve a solution for this menace.''

The remarks from Navy Chief came days after a CRPF convoy was attacked by a Jaish-e-Mohammed suicide bomber, which resulted in the death of at least 40 troopers.

In a befitting response to Pakistan, the Government gave a go-ahead to the Indian Air Force, which conducted airstrikes targeting a major terrorist training camp in Pakistan's Balakot.

This was followed by alleged violation of India's airspace by the Pakistani fighter jets, one of which was shot down by an IAF fighter plane in the brief areal dogfight.

IAF pilot Abhinandan Varthaman, whose MiG-21 fighter plane was hit by retaliatory firing from Pakistan, ejected and landed in the PoK. He was captured alive by the Pakistani forces and later handed over to India due to tremendous international pressure.

Meanwhile, Pakistan's Information Minister Fawad Chaudhry has denied India's accusation that Islamabad was involved in the February 14 attack in Pulwama.

He, however, added that his government had decided to crackdown on terrorists claiming that the decision to act was taken at a meeting of the National Security Committee much before the suicide bombing in J&K.

After the bombing and subsequent airstrikes by India, the United States, Britain and France proposed last week that the UN Security Council blacklist the head of JeM, Masood Azhar.

In an interview with a-US based news channel, Pakistan's Foreign Minister Shah Mehmood Qureshi had said that Azhar was in Pakistan and "really unwell".

A media report later indicated that Pakistan may not resist the UNSC move this time.

15 of 20 most polluted cities in world are in India, Gurugram on top