This is our faith, people can say whatever they want: Rajnath Singh on criticism over Rafale 'shastra puja'

Defence Minister Rajnath Singh, who arrived in India from France visit on Thursday night, responded to Opposition's criticism over performing Rafale 'shastra puja' and said that he did what he thought was "right". 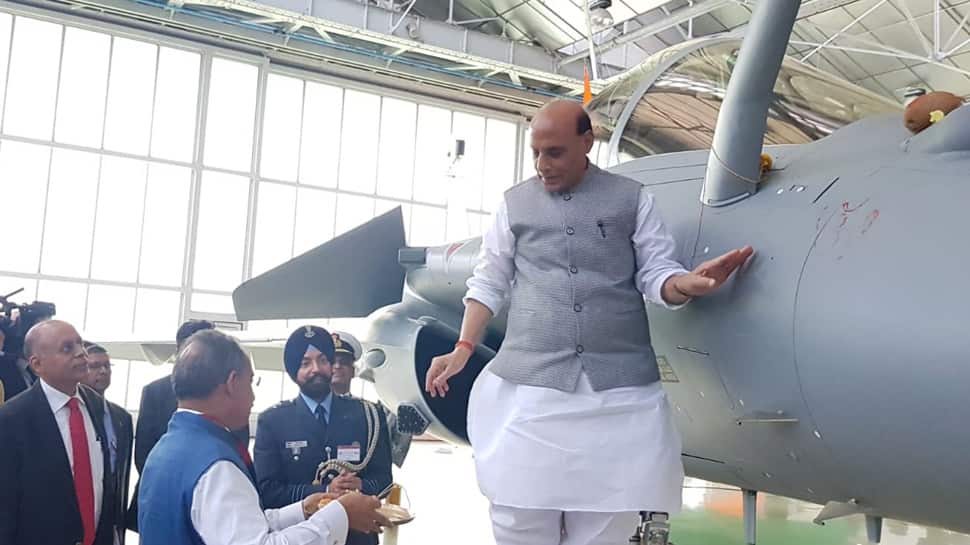 New Delhi: Defence Minister Rajnath Singh, who arrived in India from France visit on Thursday night, responded to Opposition's criticism over performing Rafale 'shastra puja' and said that he did what he thought was "right".

Singh was in France for the official handover of the first Rafale aircraft. He also took a 35-minute-long sortie in a Rafale fighter jet after taking off from Dassault Aviation Mérignac facility in France and created history by becoming the first defence minister to fly in Rafale fighter jet.

"People can say whatever they want. I did what I thought was right and I will continue to do so. This is our faith, that there is a superpower and I have believed it since childhood," the Defence Minister said, news agency ANI reported.

He also added that people have the right to pray according to their beliefs and that he would not object if someone else had performed the puja.

"I feel there must have been a difference of opinion over the issue in Congress as well, it would not have been everybody's opinion," Singh added.

Congress had criticised Singh for performing Rafale 'shastra puja' during the handover ceremony of the fighter jet in France on Tuesday. The party also accused the BJP-led government at the Centre of trying to saffronise the Rafale handover.

Terming the puja a 'drama', senior Congress leader Mallikarjun Kharge had said that there was no need for the Defence Minister to perform the 'shastra puja'.

Mallikarjun Khage, Congress on Defence Minister officially receiving Rafale aircraft in France & performing 'Shastra Puja': There is no need to do such 'tamasha' (drama). When we bought weapons-like the Bofors gun previously purchased, no one went & brought them while showing off pic.twitter.com/ITM0IpSMw6

Kharge had also said that it is the duty of Indian Air Force (IAF) officers to judge the value of any fighter aircraft and BJP leaders are just interested in garnering publicity.

'Barbaric' murder of RSS worker, his family, a reflection of situation we are in: West Bengal Governor