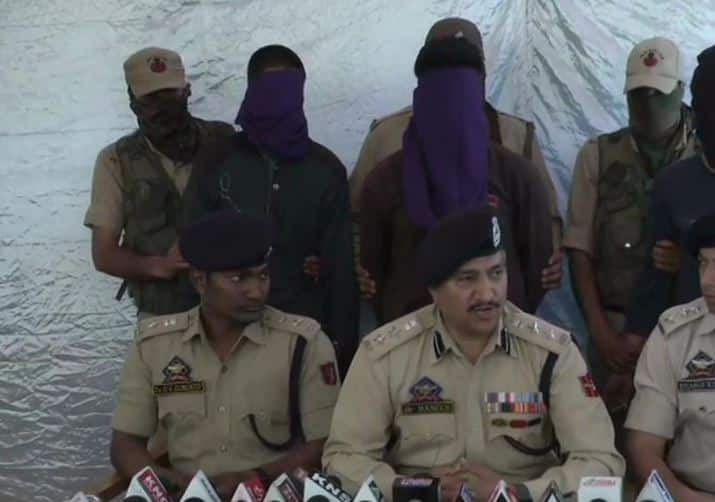 Addressing a press conference, SSP Mughal said that the trio was involved in carrying out an attack on a police post in Chanpora, Srinagar on Friday. The police have recovered one Chinese pistol, 2 magazine and 6 live rounds from the arrested JeM terrorists.

The arrested terrorists were identified as Sameer Ahmad Dar, Mushtaq Ahmad Gojri and Junaid Shafi Dar. The overground worker has been identified as Lateef Ahmed Dar.

The terrorists had attacked the police post on Friday and Constable Firoz Ahmed had got injured in the firefight. The responsibility for the attack was claimed by a terror group named Al-Umar Mujahideen.

The attack took place just two days after Jammu and Kashmir police had arrested a Pakistani terrorist who had been operating in Srinagar for more than a year. The terrorist named Abdul Qayoom was planning to revive terrorism in Baramulla district of the state.

Senior Superintendent of Police Baramulla, Abdul Qayoom had siad that Waqar, a resident of Mohalla Miana, Mianwali, Punjab, Pakistan, had entered India in July 2017 by crossing the border and was operating in Srinagar for over a year.

According to SSP Qayoom, Waqar was a member of Pakistan-based terror group Lashkar-e-Taiba and he decided to join LeT after he was told that the Indian government does not allow Muslims to offer Namaz in Kashmir. He was also brainwashed into believing that Muslims are being persecuted in Kashmir.

Meanwhile, DGP Jammu and Kashmir, Dilbag Singh on Wednesday said at a press conference that recruitment of local youth for terror activities have gone down in the last one year. He said that a total of 272 terrorists were killed in state during 2018 and many were arrested.