Prior to the arrival of the US First Lady, excited students dressed in traditional attire were waiting for her patiently. 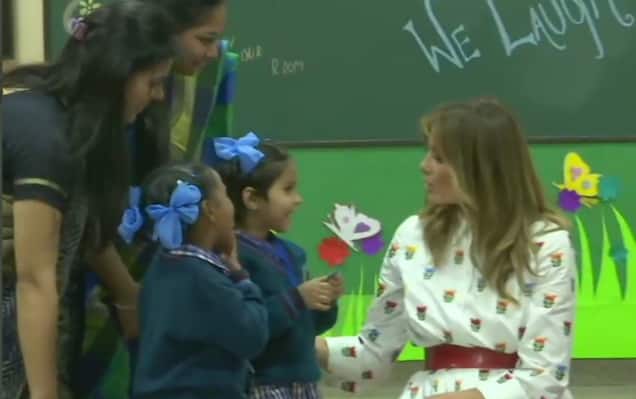 Prior to the arrival of the US First Lady, excited students dressed in traditional attire were waiting for her patiently, while the Sarvodaya Co-Educational Senior Secondary School was decked up with floral garlands and motifs to welcoming her.

As soon as she entered, lensmen scurried to get a perfect shot. The children welcomed the First Lady by applying 'teeka' on her forehead, and was also handed over a bouquet after which she lit the ceremonial lamp.

In the school premises, floral rangolis were drawn at multiple places and a student band was waiting to welcome her. Children were seen rehearsing just outside the gate of the school.

Earlier, the US Embassy had stated that it had no objection to the presence of Chief Minister Arvind Kejriwal and his deputy Manish Sisodia during Melania Trump`s visit to the government school.

The Embassy added, "it is best to ensure focus is on education, school, and students".

Earlier, US President Donald Trump received a ceremonial welcome at the Rashtrapati Bhavan on. Trump, accompanied by wife Melania, arrived at the President House in the famous `The Beast` car, accompanied by Presidential Bodyguards and was warmly welcomed by President Ram Nath Kovind, his wife Savita Kovind and Prime Minister Narendra Modi.

The US President Donald and his wife Melania later paid homage to Mahatma Gandhi at Rajghat and planted a sapling at the memorial of India's Father of the Nation.