A total of 22 tableaux – 16 from different states and union territories and six Ministries, Departments and other institutions – presented a colourful display on the life, times and ideals of Mahatma Gandhi. 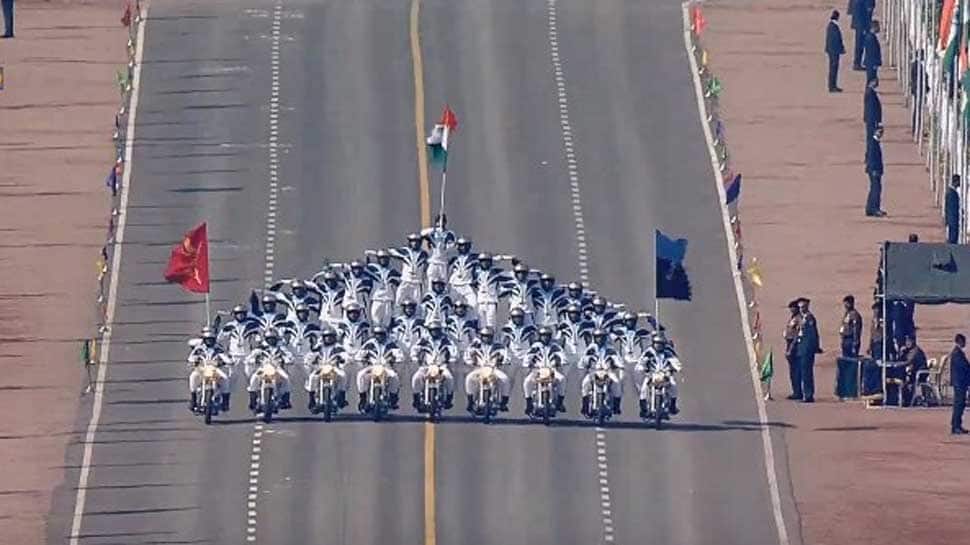 The parade officially kicked off with the President awarding the  Ashok Chakra posthumously to Lance Naik Nazir Ahmad Wani's wife and mother. Wani lost his life in a counter-terror operation against six terrorists in Hirapur village near Batgund, in Shopian on November 25, 38-year-old.

Parade commander was the first one to salute the President. Soon after, India's military muscle – main battle tanks, K-9 Vajra and M777 howitzers – took the centrestage. Next came the marching contingents of the Army which included the Madras Regiment, the Rajputana Rifles, the Sikh Regiment, the Gorkha Brigade, the Army Service Corps, and the 102 Infantry Battalion (Territorial Army) Punjab.

For the first time, an all women marching contingent of the Assam Rifles led by Major Khusboo Kanwar and veterans of Indian National Army (INA) participated in the parade.

This was followed by tableaus and displays of the Indian Navy contingents which showcasing the scaled-down models of the aircraft, radar and missile system. The models displayed were Light Combat Aircraft (LCA), Low-Level Light Weight Radar (LLLWR), Sukhoi-30MKI and Akash Missile System.Defence Research and Development Organisation (DRDO) displayed its Medium range Surface to Air Missile (MRSAM) and the Arjun Armoured Recovery and Repair Vehicle (Arjun ARRV).

A total of 22 tableaux – 16 from different states and union territories and six Ministries, Departments and other institutions – presented a colourful display on the life, times and ideals of Mahatma Gandhi.

This was followed by children's present dance shows. Twenty-six children including six girls and 20 boys, Awardees of Pradhan Mantri Rashtriya Bal Puruskar 2019 for their exceptional achievement, also participated in the parade.

Corps of Signals Motor Cycle Team saluted the president with daredevil acts in the Parade under the dynamic leadership of Captain Manpreet Singh, who broke his own world record smartly from a 12.5 feet ladder. The previous record was from an eight-feet ladder.

The culmination of the parade was marked by a lone Su-30 MKI flying at a speed of 900 km/hr splitting the sky with a ‘Vertical Charlie’ manoeuvre over the saluting dais.