Veer Savarkar's grandson slams Rahul Gandhi, says 'it would have been a matter of embarrassment had his surname been Savarkar'

Rahul launched a scathing attack on the Narendra Modi-led BJP government at the Centre in its massive 'Bharat Bachao' rally saying that he will never apologise for the speaking the truth. Saying that his name was Rahul Gandhi and not Rahul Savarkar, he slammed the government and said he was told to apologise in Parliament for something which was right. 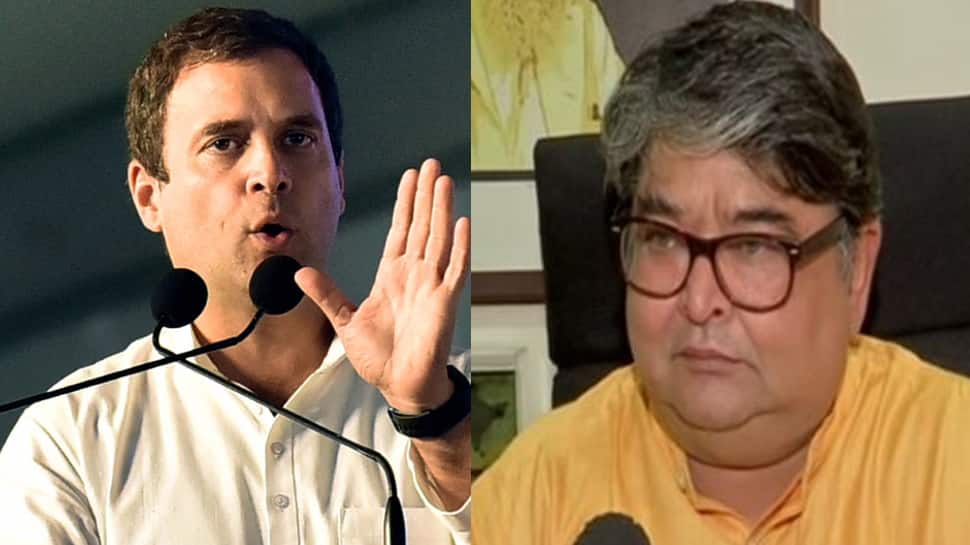 Hours after Congress leader Rahul Gandhi's 'I am not Rahul Savarkar' remark, Ranjit Savarkar, the grandson of Veer Savarkar, on Saturday slammed him asserting that it would have been a matter of embarrassment for his family had Rahul's surname been Savarkar. "It is a good thing that his name is not Rahul Savarkar. Had his name been Savarkar, we would have had to hide our faces with shame."

Rahul launched a scathing attack on the Narendra Modi-led BJP government at the Centre in its massive 'Bharat Bachao' rally saying that he will never apologise for the speaking the truth. Saying that his name was Rahul Gandhi and not Rahul Savarkar, he slammed the government and said he was told to apologise in Parliament for something which was right. Lashing out at Prime Minister Narendra Modi, Rahul said that it is "Narendra Modi and his assistant Amit Shah who should apologise to the nation," while adding that no one from Congress will apologise.

In strong words, Ranjit also slammed former prime minister Jawaharlal Nehru calling him a loyal to the British. He stated that Rahul Gandhi should be grateful to his grandmother and former prime minister Indira Gandhi for dropping her surname (Nehru) as a year before India gained independence, Nehru swore his loyalty to the then King of England, King George VI. "Jawaharlal Nehru was a British loyalist as in 1946 he accepted to work in the Vice Royal Council as a minister, in greed for power. He expressed loyalty to the then monarch of England, King George VI and took an oath to be loyal to the British. Savarkar could never even dream about it."

The grandson of Veer Savarkar also said, "Nehruji was so devoted to his oath of slavery that even after India became independent on August 15, 1947, he considered King George to be the Emperor of India till 1950 and took permission from him for all important decisions. Even when Rajaji was made Governor-General in April 1949, the permission of King George taken. Only such people can insult patriots like Savarkar!"

"It is noteworthy that the government refused to provide cannon for Savarkar's funeral, but when Nehruji's dear friend, Lady Mountbatten, died, the Indian Navy warship 'Trishul' was sent there. Is the country a private fief of this family? This Congress is no longer a pre-independence patriot Congress, it has become a slave dynasty party," added Savarkar.

Rahul had said that the issue is being raised by the BJP to deflect the attention of the people from protests in North-East over the Citizen Amendment Act. "I will not apologise... I have a clip in my phone in which Narendra Modi ji is calling Delhi a `rape capital`, will tweet it so that everyone can see. The main issue is Narendra Modi and Amit Shah set northeast on fire. Just to deflect attention from protests in North East, this is being made an issue by BJP," Gandhi had said.

He had also said that the incidents of rape were being reported from different parts of India as the incidents were happening everywhere. "I had said that Narendra Modi had said there will be `Make in India`. We thought there will be `Make in India` in newspapers but we look at newspapers today and see `rape in India`. Rape incidents are happening everywhere", he had added. "In Unnao, BJP MLA raped a woman. The accident of the victim was orchestrated. Narendra Modi did not say anything. Modi spread violence and now it is everywhere in the country," he said.

Both houses of Parliament on December 13 witnessed uproar as BJP members demanded an apology from the former Congress president. Union Minister Smriti Irani has also approached the Election Commission (EC) seeking strong action against Gandhi for allegedly using crimes against women as a political tool.

Reacting to Rahul's remark, BJP leader Devendra Fadnavis said, "Rahul Gandhi's statement is shameful, maybe he does not know about Savarkar ji. He faced torture for 12 years in the cells of Andaman jail, Rahul Gandhi cannot do it for even 12 hours. Just putting Gandhi in your name doesn't make you a Gandhi. The kind of people Shiv Sena has to deal with to remain in power is very clear. Maharashtra and the rest of the country will never tolerate the insult to Savarkar ji. Earlier Shiv Sena used to react very sharply, why have they gone soft now?"