Dubey's brother- in- law Dinesh Tiwari performed the last rites at the electric crematorium in the presence of his wife and son. 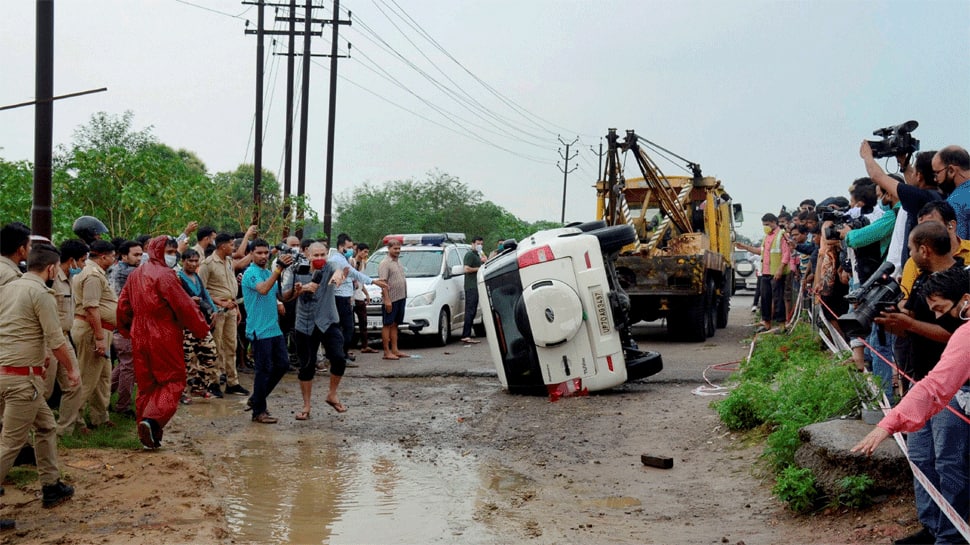 Kanpur: Wife of the dead gangster Vikas Dubey, the notorious gangster who was killed in a police encounter on Friday (July 10),  said that her husband was wrong and he deserved this fate.

Richa Dubey said this at the time when last rites of the gangster were conducted in Kanpur amid tight security. Richa, who came at the Bhairoghat to attend the cremation, also expressed her anger at mediapersons and asked them to leave the place. She also accused them for being responsible for Dubey's killing in the encounter.

Superintendent of Police, Rural, Brijesh Srivastava told reporters that Dubey's brother- in- law Dinesh Tiwari performed the last rites at the electric crematorium in the presence of his wife and son. The police had arrested Dinesh Tiwari from Kanpur's Bikru village after the July 3 massacre outside Dubey's residence.

Dubey, who was carrying a bounty of rs 5 lakh on him, was gunned down when he tried to escape when police officials were taking him to Kanpur from Ujjain. Dubey snatched police officials pistol and made a bid to escape. He opened fire at the police who then reacted in self defence and returned fire at the gangster, injuring him. He was taken to a hospital where the doctors declared him brought dead.

According to police, Dubey sustained four bullets on him, three in chest and one in the hand.

Dubey's other relatives and neighbours shunned the gangster in his death and did not turn up for cremation, despite police request.