According to reports, the video is believed to have taken at Vikas Dubey's henchman Amar Dubey's wedding. Amar was killed during a police encounter on July 5. 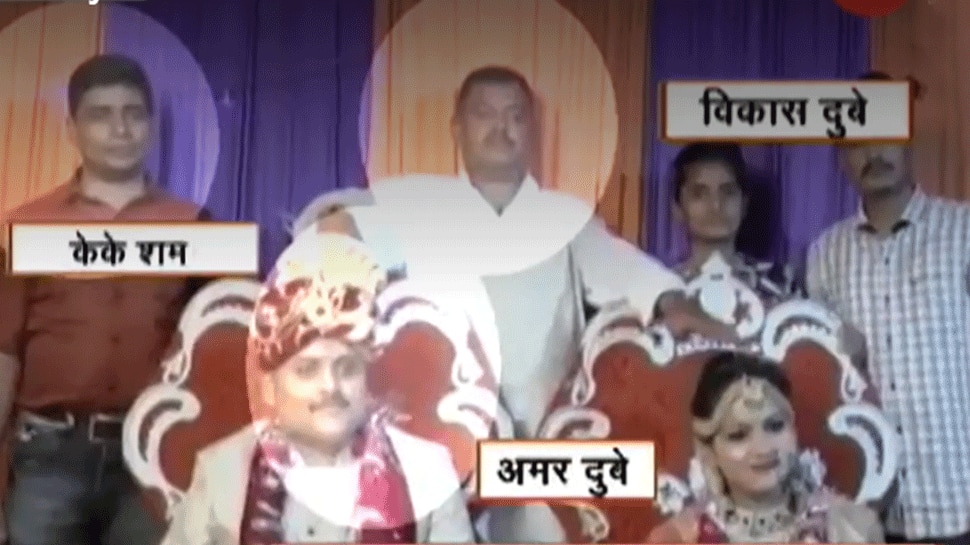 New Delhi: Amid allegations on several policemen of passing crucial information to Kanpur gangster Vikas Dubey, a fresh video has surfaced which shows the slain criminal sharing a dais with suspended inspector Krishn Kumar Sharma Sharma at a wedding.

According to reports, the video is believed to have taken at Vikas Dubey's henchman Amar Dubey's wedding. The video, which has captured Dubey along with the police inspector, shows the proximity between the two. In the video, Vikas, clad in a white shirt, is seen standing on the stage behind groom Amar and bride Kshama is seen telling Sharma, "Don't be afraid. Come close (Arre aur nazdik aa jao. Daro nahi)." The two are then seen posing for the camera along with the bridegroom.

According to media reports, Amar Dubey's wedding took place on June 29. Amar, the nephew of Vikas Dubey, also believed to be his close aides and personal shooter, was killed during a police encounter on June 8.

KK Sharma, who was posted at the Chaubepur police station when the Bikru village ambush took place in which at least eight police personnel were killed, is suspected to have leaked about the police raid to the gangster. He, along with three others, was suspended on July 5, two days after the Bikru ambush, over his alleged nexus with Dubey and for passing on information to him about police movements towards his house in Kanpur district to arrest him.

According to reports, 'information from the Chaubepur police station about the police raid was leaked several hours in advance, giving the gangster and his gang members enough time to plan the ambush.