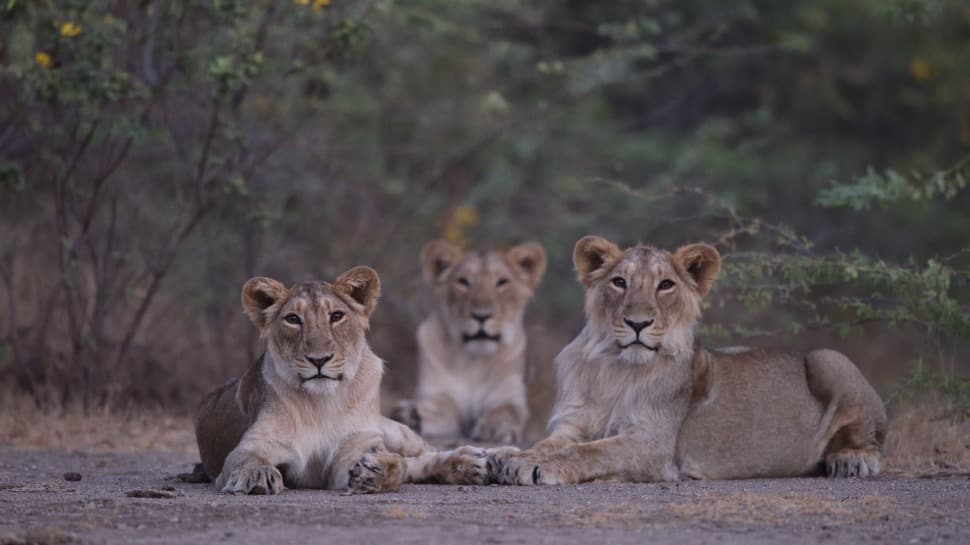 New Delhi: As the nation enters the last two days of the Wildlife Week, an interesting video has gone viral on social media platforms. In a 32-second long clip, a Gir Forest employee is seen talking to a lion who's sitting in the middle of the road and tries to convince him to move away in the Gujarati language.

The employee told the lion in Gujarati that he has been working the whole day and requests to kindly let him go home.

What happened next in the video will SURPRISE you!

The king of jungle obliges and leaves the road.

A Gir Forest employee finds a lion on road. He tries to explain in Gujarati, the lion that he has been working whole day and requests to now kindly let him go home.And,the King of Jungle obliges...

The incident comes to limelight a day after Prime Minister Narendra Modi shared an inspirational message on the occasion of wildlife week 2020. He said that the country is now making efforts to conserve endangered species through dedicated projects such as ‘Project Lion’ and ‘Project Dolphin’ after the success of ‘Project Tiger’ and ‘Project Elephant’.

The Prime Minster said, coinciding with the birth anniversary of  Mahatma Gandhi, the apostle of peace and non-violence, the celebration of Wildlife Week is an ideal occasion to reaffirm the commitment towards conservation of wildlife and harmonious co-existence of all living beings.

He expressed that today with a robust and wide network of protected areas, the commitment towards wildlife protection is as strong as ever. He also mentioned that the country hosts the last wild population of Asiatic lions and said that the resolve of doubling tiger numbers have been fulfilled well in advance.

On the occasion of #wildlifeweek2020 , the inspirational message of Prime Minister Shri @narendramodi will encourage us all to intensify wildlife conservation in the country, in order to make the planet Earth a better place to live in. pic.twitter.com/WjT1orQrEA

Earlier on June 10, 2020, the Prime Minister took to social media and made the announcement that the Asiatic lions in the Gir forest as their population has increased

"Two very good news: Population of the majestic Asiatic Lion, living in Gujarat’s Gir Forest, is up by almost 29%. Geographically, distribution area is up by 36%. Kudos to the people of Gujarat and all those whose efforts have led to this excellent feat."

Population of the majestic Asiatic Lion, living in Gujarat’s Gir Forest, is up by almost 29%.

Geographically, distribution area is up by 36%.

Kudos to the people of Gujarat and all those whose efforts have led to this excellent feat.https://t.co/vUKngxOCa7 pic.twitter.com/TEIT2424vF

As per the Gujarat government:

- The population of Asiatic Lions has thus shown a steady increase with a population of 674 individuals with an increased rate of 28.87% (one of the highest growth rate so far) from the previous growth of 27% during 2015 (523 lions).

- There has been a consistent increase in the population and distribution area of Asiatic Lions mainly owing to the effective conservation and management by the Gujarat Forest Department.

- Multiple strategies and interventions have been implemented in the Asiatic Lion landscape that has majorly contributed to the current conservation success of the Asiatic lions viz. people’s participation, use of modern technology, wildlife health care including as import of CDV vaccine, habitat management, increase in prey base, human-lion conflict mitigation, etc. 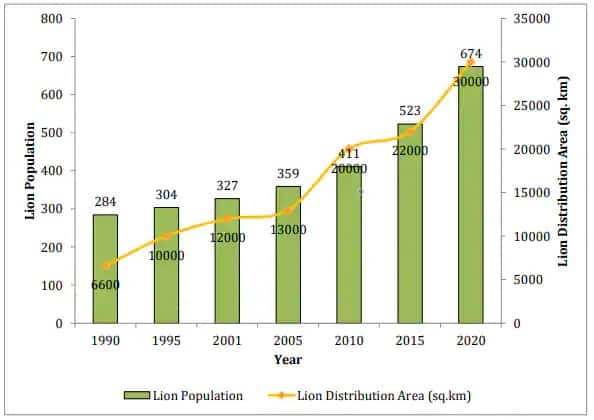 Notably, Gujarat's Forest department carried out a population estimation exercise on the night of June 5 and 6 in 2020 when there was full moon. The exercise was undertaken as the five yearly census could not be carried out in May due to the coronavirus outbreak and lockdown.