PM Modi said that the three laws were brought for the benefit of farmers but "we couldn't convince a section of farmers despite best efforts". The goal of the three farm laws was to empower farmers, especially small farmers, he said. 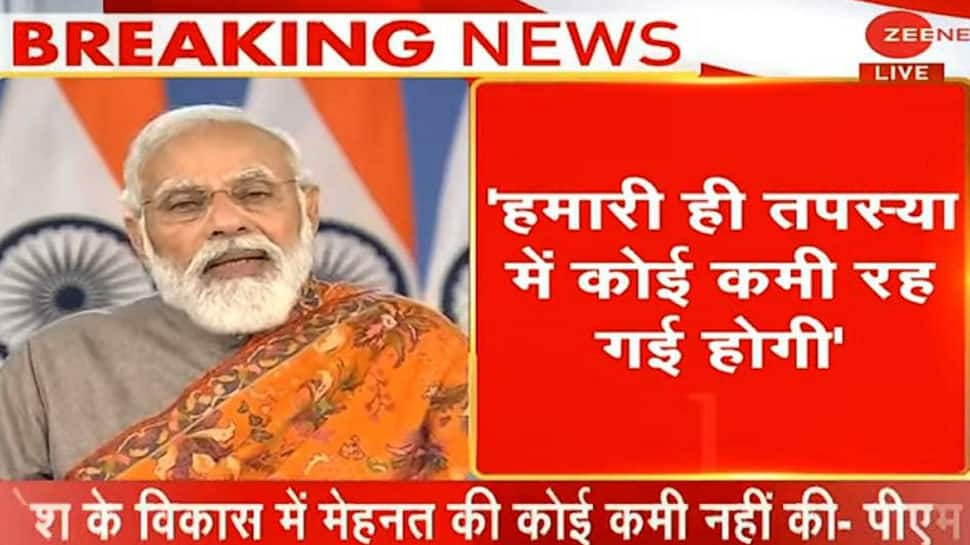 PM Modi said that the three laws were brought for the benefit of farmers but "we couldn't convince a section of farmers despite best efforts". The goal of the three farm laws was to empower farmers, especially small farmers, he said.

The PM also outlined several measures taken by the NDA government for the welfare of the poor and farmers of the country. "In my five decades of work, I have seen the difficulties faced by the farmers. When the nation made me the Prime Minister, I placed utmost importance to 'krishi vikas' (farmers' development)," the PM said.

"We worked in providing farmers with seeds at reasonable rates and facilities like micro-irrigation, 22 crore soil health cards. Such factors have contributed to increased agriculture production. We strengthened Fasal Bima Yojana, brought more farmers under it,'' the PM said.

The PM went on to say that his government worked hard to ensure that farmers get the right amount for their hard work and took many steps. "We strengthened the rural infrastructure market. We not only increased MSP but also set up record govt procurement centres. Procurement by our govt broke the record of the past several decades," the PM said.

The PM said that to overcome the challenges of the small farmers of the country, his government worked all-round on seeds, insurance, markets and savings. "Along with good quality seeds, the government also connected the farmers with facilities like neem coated urea, soil health card, micro-irrigation," he added.

Referring to the "Fasal Bima Yojana'', the PM said that it has also helped farmers. Rs one lakh crore has been given to farmers as compensation, and bima and pension have also been provided. There has been direct benefit transfer as well for the farmers, the PM said.

He added that the rural market infrastructure has been strengthened, and the minimum support price (MSP) has been raised. 1,000 mandis have been connected to e-mandis, allowing them a platform to sell their produce anywhere in the country.

"The agriculture budget has also risen by five times with over Rs 1.25 lakh crore being spent annually," PM Modi said.

During his speech, the PM also made an appeal to the farmers to end their agitation and go back to their homes." "Today is Guru Purab, I request all the farmers to please return to your family," the PM said. “We will begin the procedure at the Parliament session that begins this month. I urge farmers to return home to their families and let’s start afresh,” PM Modi said.

PM Modi began his address by extending his greetings to all on the occasion of Dev Deepawali and Prakash Parv. "It is pleasing that Kartarpir Corridor has re-opened after a gap of 1.5 years," the PM said in his address to the nation.

"Guru Nanak ji had said 'Vich Duniya Sev Kamaiye, Taan Dargah Baisan Paiyeea'. It means that only by taking the path of service to the nation can life turn out well. Our government has been working with this sense of service, to make the lives of people easy,'' the PM said.

According to Prime Minister`s Office (PMO), the Prime Minister will later inaugurate key schemes relating to irrigation in Mahoba, Uttar Pradesh. Later in the day, Prime Minister is scheduled to visit Jhansi for the "Rashtra Raksha Samparpan Parv".

During this event, he will formally hand over Defence Research and Development Organisation (DRDO) designed Advanced Electronic Warfare (EW) suite for Naval ships to the Indian Navy.

The last time the Prime Minister addressed the nation was right after India scripted history by becoming only the second country after China to reach the one billion COVID-19 vaccinations milestone mark in October.

Earlier this week, the Kartarpur Sahib Corridor - the road to Darbar Sahib Kartarpur in Pakistan - was reopened, just days before the birth anniversary of Guru Nanak. Movement on the Kartarpur corridor was suspended in March 2020, when Pakistan put restrictions on travel from India after the Covid outbreak.