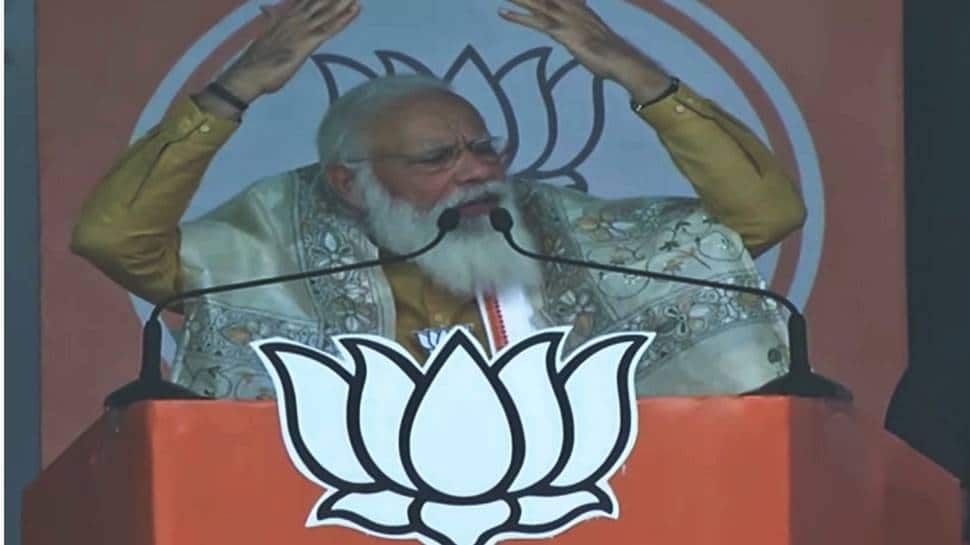 New Delhi: Prime Minister Modi in poll-bound West Bengal targeted Mamata Banerjee at a rally on Wednesday (March 24, 2021) claiming that the people of Bengal want a change and that the rule of Mamata Banerjee (Didi) will come to an end after this election.

“On May 2, 'Didi jacche, ashol poriborton asche'", Modi said, people will show the door to Trinamool Congress (TMC) on May 2 which is the day the results for the West Bengal Assembly Election will be announced.

“Didi, even the children of West Bengal have understood your 'khela' (game)... on May 2, West Bengal will show the Didi the door,” he said.

PM Modi, who is back in Bengal, slammed TMC chief hinting at corrpution by both her and her nephew Abhishek Banerjee, he accused the ruling TMC over Cyclone Amphan relief not reaching the affected people.

"The relief sent by the Central govt got stuck in the nephew window. Today, the entire WB is asking - Who looted the relief material of Amphan? Who looted the foodgrains sent for the poor? The people affected by Amphan are still suffering. On May 2, Bengal will see the real change," PM Modi said.

“Didi hasn't been able to answer those who were first destroyed by Amphan, and later by 'tolabaaz' of the TMC. The relief sent to Bengal by the Centre got stuck in the 'Bhaipo (nephew) window'. Didi, Bengal wants to know who looted the relief for Amphan?” the PM asked, while campaigning for his BJP in the poll-bound state.

PM Modi said West Bengal’s development is BJP’s commitment. “We will work for Bengal’s bright future,” he assured the people.

Voting for West Bengal will take place in eight-phase and for and Assam in three-phases while Tamil Nadu, Kerala and Puducherry will have a single-phase election on April 6. The counting of votes is scheduled for May 2.