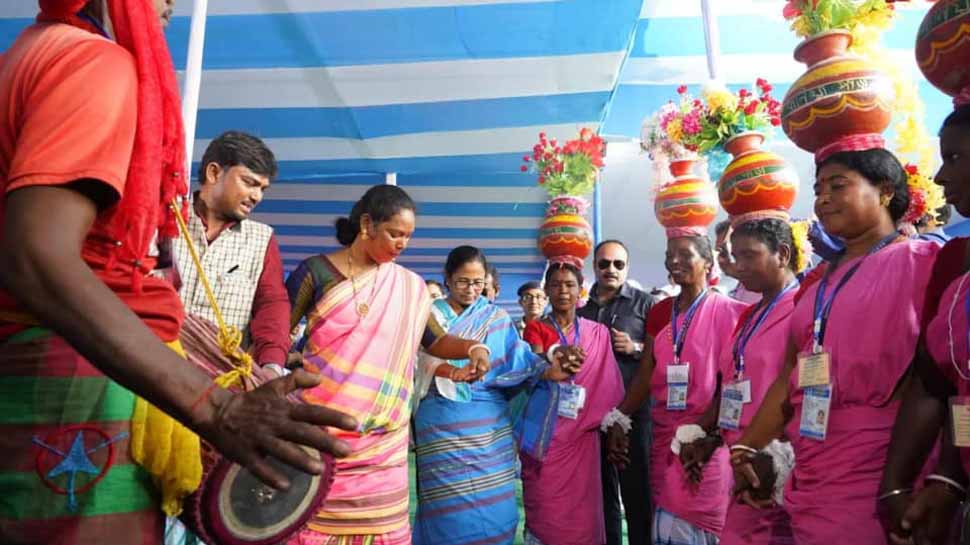 In an apparent effort to reach out to the Scheduled Caste (SC) and Scheduled Tribes (ST) communities of West Bengal, Chief Minister Mamata Banerjee on Thursday (March 5) attended a mass marriage ceremony of Adivasi girls and boys held in Malda district. During the ceremony, CM Mamata was also seen shaking a leg with Adivasi women.

A total of 300 Adivasi couples from Gazole, Habibpur and Bamangola were married in the ceremony which was organised by West Bengal police. The newlyweds were also given Rs 25,000 as one-time financial assistance by CM Mamata Banerjee under Rupashree Prakalpa scheme.

"I wish the best to all of you who are getting married today. You(adivasis) are our pride. Almost 300 families are getting married. Wish them happiness. I feel elated to be a part of this Gana Bibaha in the adivasi culture. We have made a law that no one can grab your land. Land and rights of adivasis are of adivasis. If anyone is interested in community marriages please seek help from police, they will help you. Soon I will visit North Bengal too," said CM Mamata.

Notably, a similar effort by a BJP-affiliated organisation as foiled in Gajole by tribals who dubbed the move as 'Hinduisation of tribals'. The area had also witnessed some tension due to this move and situation was brought under control only after the intervention of police.

CM Mamata Banerjee had also slammed the BJP-affiliated organisation for trying to convert tribal people in the name of social service and she had decided to arrange the mass marriage ceremony herself.

“Three days ago, in Malda district, tribal women were being converted in the name of marriage. I thank my administration that they acted. One person has been arrested and the rest are evading the police. They are shameless,” CM Banerjee had said while addressing a public meeting at Krishnanagar in Nadia district on Wednesday.