Doval was in Kandahar for six days from December 26, 1999, till December 31 trying to negotiate the safe release of the passengers. 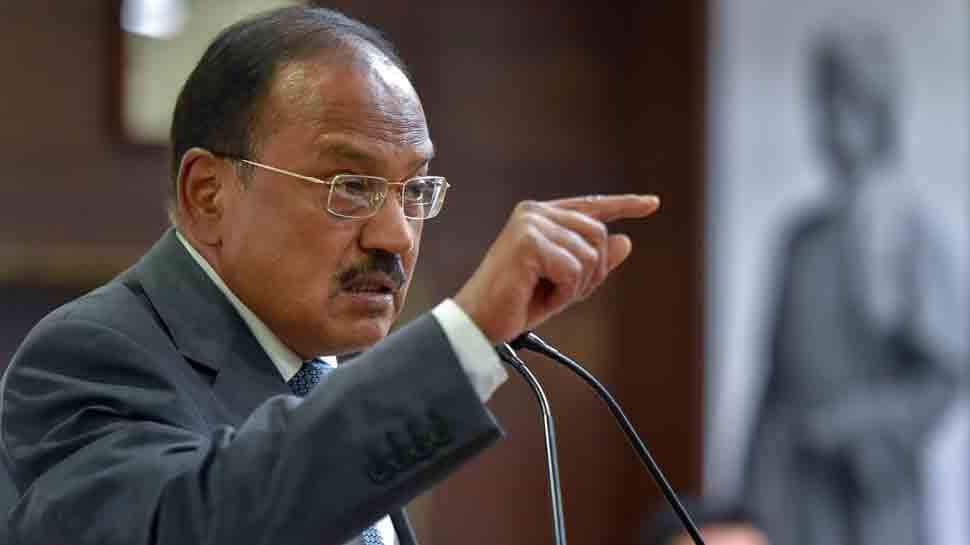 New Delhi: Congress President Rahul Gandhi on Sunday attacked National Security Adviser Ajit Doval alleging that he was among those responsible for the release of Jaish-e-Mohammad (JeM) chief Masood Azhar in 1999 when Indian Airlines flight IC-814 was hijacked by terrorists. Doval was tasked with leading the four-member negotiating team to Kandahar in Afghanistan to negotiate the release of passengers of the hijacked IC 814 plane.

Doval was in Kandahar for six days from December 26, 1999, till December 31 trying to negotiate the safe release of the passengers. In 2009, Zee News had interviewed Ajit Doval on the IC-814 hijacking incident. In that interview, Doval, who was then Additional Director of Intelligence Bureau, had revealed many interesting facts about the hijacking.

Here are the details of the interview:

Q: What happened when it was known that the plane has been hijacked?

Q: What were the problems in negotiating for the safe release of hostages?

Doval: On December 26, the government decided that it will negotiate to secure the release of hostages. The government was under immense pressure from the public and media to bring back home the hostages safely at any cost. The pressure increased following the killing of Rupen Katyal by the hijackers. I was then ordered by the government to fly to Kandahar in a special aircraft. After reaching Kandahar, I realised that hijacking negotiation is not a diplomatic negotiation and it is done mainly to buy time. The objective of the negotiation is to achieve three things. First and foremost is to stop the hijackers from harming any passengers or cabin crew members. The second objective is to give maximum time to the government to start preparing for rescue operations and the third objective is to keep talking with the hijackers in order gain maximum information and intelligence from them like their morale, their physical fitness, the total number of hijackers and what are there demands.  The hijacking negotiation is a tactical step aimed at saving the lives of people. After reaching Kandahar, I realised that we were very weak in all these three aspects. The primary issue was that the hijackers were not in a position where it was possible for us to tire them out because they were receiving food, medicines and they were able to move in and out. The most important thing was that they were not feeling insecure at all. They were fully confident that India will not attack them in Kandahar. The biggest trouble in negotiation is when the hijackers are not under any pressure. On the other hand, in this case, we were in a vulnerable position as we were surrounded by Taliban fighters and their tanks and anti-aircraft guns. Even the hijackers knew that negotiators were under pressure. We were trying our best to gather intelligence about the hijackers but they knew more than us about what was happening in India. They were getting all the information from ISI. We were receiving some intelligence about the hijackers but the Taliban government was not helping us to verify that intelligence. Taliban was neither willing to act themselves against the hijackers, nor did they allowed the Indian government to take action the hijackers. They told us clearly that they will not allow India to carry out any operation on their soil.

Q: What were the demands of the hijackers?

Doval: We were talking with the hijackers on wireless and they put up their demand over 24 hours after the beginning of negotiations. They gave us a list to release 35-35 terrorists, exhume the dead body of Sajjad Afghani and a ransom of USD 200 million. As the negotiations proceeded, they gave up the demand of body of Sajjad Afghani and USD 200 million. It is quite possible that they were not very serious about these two demands but we were informed by Taliban officials that they had asked the hijackers to drop these two demands because they were not as per the tenets of Islam. But they were adamant on their demand to release the terrorists in exchange for the release of passengers. They kept on saying that we are "fidayeens and we are not worried about dying at all. But we will kill all the passengers and we are now not worried about our lives and if you do not want to do anything then it is up to you".

Q: Did the demand to release Masood Azhar raised in the beginning?

Doval: No, this demand was raised by them very late as initially, they kept on demanding the freedom of Kashmir.

Q: Did you talk to passengers who were inside the hijacked plane?

Doval: They made us talk to crew members for one or two seconds as we said that we wanted to know that all our passengers and crew members are safe or not. Rest they had monopolised the communication network.

Q: Did you feel disappointed as an Indian?

Doval: As a professional, you don't always talk about winning and losing. For me, it was a professional challenge and the challenge increased after one of the passengers named Rupen Katyal was killed at Dubai airport. After reaching Kandahar, there was no option to take physical action against hijackers. Afghanistan is a land-locked country and in order to take any action there, we needed permission from Pakistan, which was highly impossible. Theoretically, even if we had tried to launch an operation, then passengers would have been the first casualties because the hijackers would have blown the plane. That's why if our objective was to save the life of passengers then in a given time-frame this was a successful operation. No country takes any action which breaks the morale of a nation and though we did not succeed in maximising our gains we did manage to minimise our losses.

Q: Do you any regrets after being involved in this operation?

Doval: As a nationalist, I do have regrets that the pride of the nation was dented. We failed to do what a powerful nation could have done to stop this plane from flying out of India. One personal regret is that when the plane was in Kandahar and hijackers were inside the plane I had gone inside the plane through cockpit by using a ladder and I had addressed all the passengers in front of hijackers. I had said that all of you are free and the Indian government is standing behind you. We will take you safely to India. After that when I asked the passengers to say 'Bharat Mata Ki Jai' and 'Jai Hind', none of the passengers said so. I had this regret that all of them were so terrified that their patriotism had been hit. I had regret that we failed to deal with Pakistan effectively after the incident. I had regrets that we could not take tough action against Pakistan for supporting the hijackers. Though we released 3 out of the 36 names demanded by us we did not create any law that if a plane is hijacked and the hijackers seek the release of any person, then the person will be treated as a terrorist and the onus to prove will lie on them.