A large number of women protesting against the Citizenship (Amendment) Act (CAA) gathered outside Jaffrabad metro station in Delhi on Saturday night blocking road no. 66 which connects Seelampur to Maujpur and Yamuna Vihar. New Delhi: Protest a mostly women gathering against the Citizenship Amendment Act (CAA) and the National Register of Citizens (NRC) outside Jaffrabad metro station in Delhi continues on Sunday (February 23).

The crowd of more than a 1000 women began protesting on Saturday night and a large number of police officials were deployed at the site. DCP (North-East) Ved Prakash Surya is also present at the spot, reported news agency ANI.

In a tweet, the DMRC said that trains will not halt at this station.

Road no. 66 which connects Seelampur to Maujpur and Yamuna Vihar has been blocked. And the Delhi Metro Rail Corporation (DMRC) has closed the entry and exit at Jaffrabad Metro station. While a protest is already going on near the main Seelampur road and Kardampuri against the amended citizenship act.

The protesters claimed that this was just a move to intensify the movement against the new citizenship law and the National Register of Citizens (NRC). Also, they were seeking reservation for Dalits.

Shadab, one of the protesters said, "We have blocked the road in order to protest and we will not move from the site till the Centre revokes the draconian law." 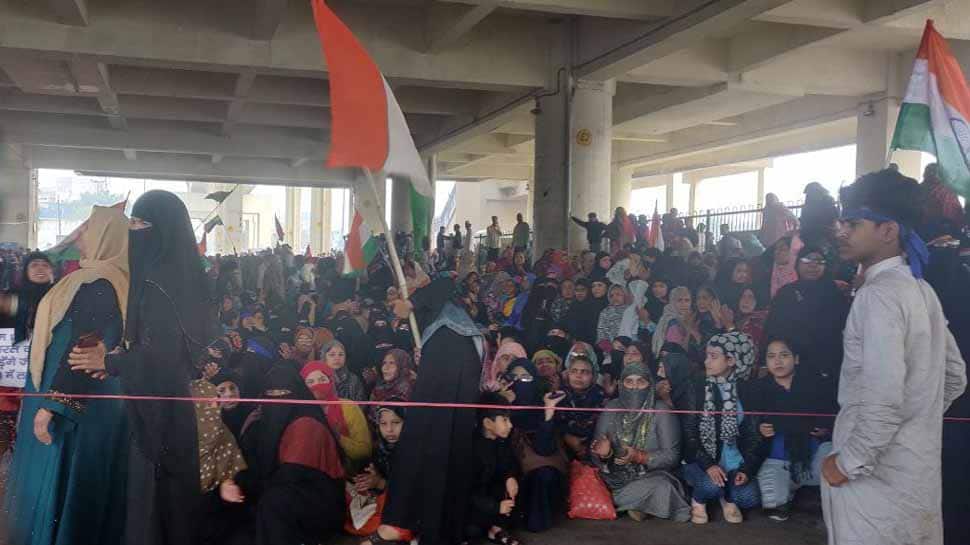 The protesters were seen wearing `NO NRC' caps and were raising slogans of "azadi". They will take out a foot march from Jafrabad road to Rajghat today, but the Delhi Police has not issued them permission for the march.

Similar scenes were witnessed in December 2019 when thousands of protesters holding placards and national flags raised slogans against the CAA. Several metro stations were under lockdown and Section 144 was imposed.

The CAA grants citizenship to refugees from Hindu, Christian, Sikh, Buddhist, Jain and Parsi communities fleeing religious persecution from Pakistan, Afghanistan, and Bangladesh who entered India on or before 31, 2014.

The Uttar Pradesh Police on Friday (February 21) opened the road from Kalindi Kunj to Faridabad and Jaitpur briefly before shutting it down again. The UP Police was removing the barricades from this route on Friday morning. But the road has been closed again.

This route goes from over Mahamaya flyover in Noida to Delhi and Faridabad. However, the road to Delhi's Sarita Vihar and Jasola through Jamia Nagar and Shaheen Bagh is still closed.

The road along the banks of the canal can be followed towards Jaitpur, Madan Pur Khadar to Faridabad via Sarita Vihar.

The protests at Shaheen Bagh gained nationwide attention due to a continued sit-in stir by people, especially Muslim women against the Citizenship Amendment Act (CAA), National Population Register and National Register of Citizens. The peaceful demonstration has been underway for more than two months now.

Islamabad has to act on state-sponsored terrorism for successful India-Pakistan dialogue: US