The Medigadda Barrage is the starting point of the irrigation project which envisages construction of three barrages between Yellampally and Medigadda. 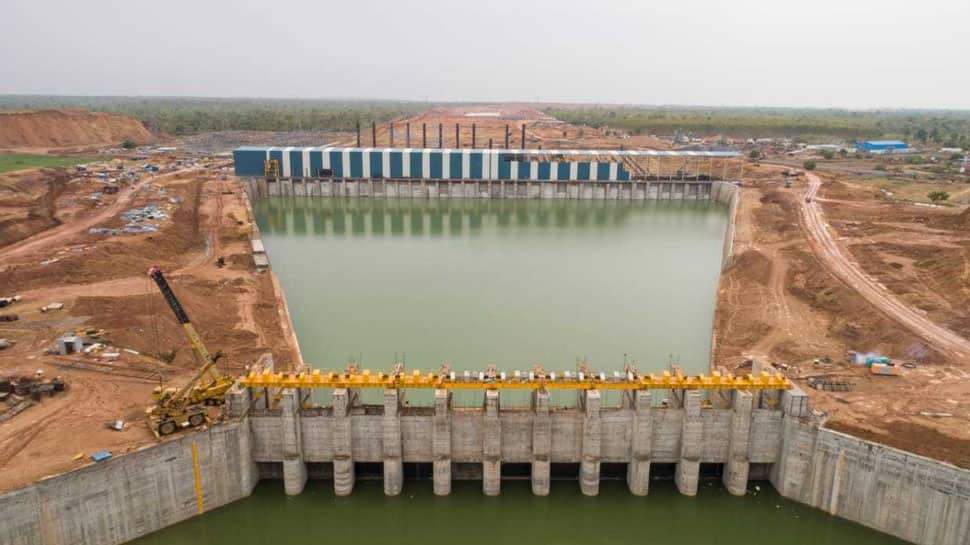 The total estimated cost to finish this project is Rs 80,000 crores and till now the Telangana government has spent Rs 25,000 crores (approximately). It has been asking the Central government to help it.

- Godavari River can be fully utilised as a reservoir with reverse pumping.
- Nearly 130 KM length of Godavari River will be filled with water by continues pumping.
- Water can be stored in Godavari to pump back which is down to up, without any land acquisition and re-settlement of villages.
- Existing irrigation system like SRSP, Mid maneru, flood flow canal etc, so many canals and reservoirs going to be utilised by this irrigation project.
- There will be efforts in this project to use the flood water, which usually gets wasted.
- Though it's a huge project when it comes to technical and engineering specifications, the land acquisition is very limited which has been possible with the use of underground set up like pumping stations, tunnels constructing and usage of existing reservoirs.
- The world's biggest and largest pumping station will be built under this project which will be underground.
- World biggest pump house (Pkg-8) is being built with each unit 139 MW pump and motor in underground with total 7 units.
- Under this project, total ayacut 37.08 lakh acres will be developed. Such development so far not achieved anywhere in the world under a single project out of this.
- In one project, 88 big pumps and motors have been erected to lift water nearly from 100 meters to 600 meters to a distance of nearly 400 km main canal only.

It is the longest and biggest irrigation system in the world.

Generally, lift irrigation schemes come up on ground level on the banks of a River or catchment areas to pump water to draw water. This modern engineering marvel KLIP package 8 pumping station lies nearly 150 metres underground. The pump station has five floors with each floor houses lifting operations. While the fourth floor houses Transformer Bay, the third floor has a Control Room. The second floor is a Battery and Motor room and first floor IT panel and Pump Floor. The ground floor has a compressor.

The project is likely to give direct benefits to farmers through improving irrigation and allayed and rural improvement activity. Not only farmers but the entire Telangana will be benefited. Food grains particularly paddy production will improve and fish, sheep, animal husbandry and poultry activity get momentum and employment opportunities will be improved. Drinking water will also be available throughout the year and green cover will be improved and water transportation possible in the Godavari between Sripada Sagar Yellampalli and Medigadda throughout the year. Environmental development particularly fauna and flora, wildlife and green cover improvement is possible in the dry area also because of water storage.

The project will benefits which includes increased agriculture yield, guarantee crop, increasing of crop intensity and area, agriculture diversification, commercial crops improvement and fish production increasing is possible. This project will give assurance for employment, crop production, food security, poverty eradication, improvement of health and nutrition and socio-economic conditions of farmers and villagers apart from livelihood.