Zee News appeals for calm, says time for India to tell why it is world's largest secular democracy

In its appeal, Zee News has said that it is an opportune moment for the members of the Hindu and Muslim communities to tell the world that India is the largest secular democracy.

NEW DELHI: Zee News, which is the country's largest news network touching the lives of millions of viewers across the globe, has appealed the countrymen for maintaing peace and harmony ahead of the pronouncement of Ram Janmabhoomi-Babri Masjid title dispute case verdict by the Supreme Court on Sayturday.

In its appeal, Zee News has said that it is an opportune moment for the members of the Hindu and Muslim communities to tell the world that India is the largest secular democracy.

Citing verses from Ramayan, Zee News said that that the SC verdict on Ayodhya is an acid test for the countrymen, who need to exercise restraint and remain calm.

In its appeal, Zee News further cited Lord Rama as ''Maryada Purshottam'' and an epitome of tolerance, which the nation should also reflect in its behaviour. 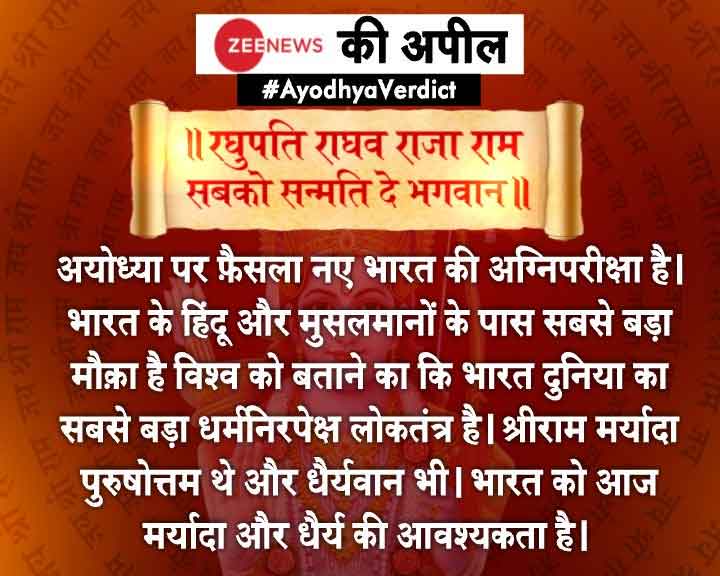 Multi-layered security arrangements have been put in place in Ayodhya, which has been turned into a fortress with deployment of 60 companies (90-125 personnel each) of the PAC and paramilitary forces. Drones and CCTV cameras will also be used to monitor the situation ahead of the verdict.