Notebandi in US: Is America planning to demonetize dollar notes printed before 2021? Check this

Notebandi in US: WhatsApp forwards in India claimed that the demonetization decision was taken in a meeting held on November 2.

Demonetisation was held in India in 2016 and those who witnessed it cannot forget it. Now, there are several social media handles and news reports that claimed the US government has decided to not accept dollar notes printed before 2021. The move will come into effect from January 2023, said the reports. These reports have a deep link with Nigeria. There are reports in Nigeria that the country's Central Bank plans to redesign banknotes of certain denominations, leaving the old ones useless and unacceptable by the end of January 2023. This comes amid reports of hoarding of Naira (Nigerian currency) by locals. The report of redesigned notes led to a frenzy as the Nigerians who may have hoarded the local currency rushed to exchange them for the US dollar. Amid all this chaos, another report emerged claiming the US government has warned that it would not accept older dollar notes printed before 2021.

On the other hand, WhatsApp forwards in India claimed that the demonetization decision was taken in a meeting held on November 2. "Sequel to the just concluded extraordinary meeting held in Washington DC on Nov. 2nd 2022 between the United States Federal Reserve Bank, Office of the Comptroller of Currency, IMF, World-Bank and Governors of Africa’s Central Banks, the United States Govt has set date for restriction on acceptable legal tender note of US Dollar which will commence on Jan. 31st 2023.....This effort is to curb billions of illegal monies in dollar bills warehoused around African continent emanating from drug related, terrorism, kidnapping and money from corrupt politicians," reads the WhatsApp forward shared with a link of Observer Times. 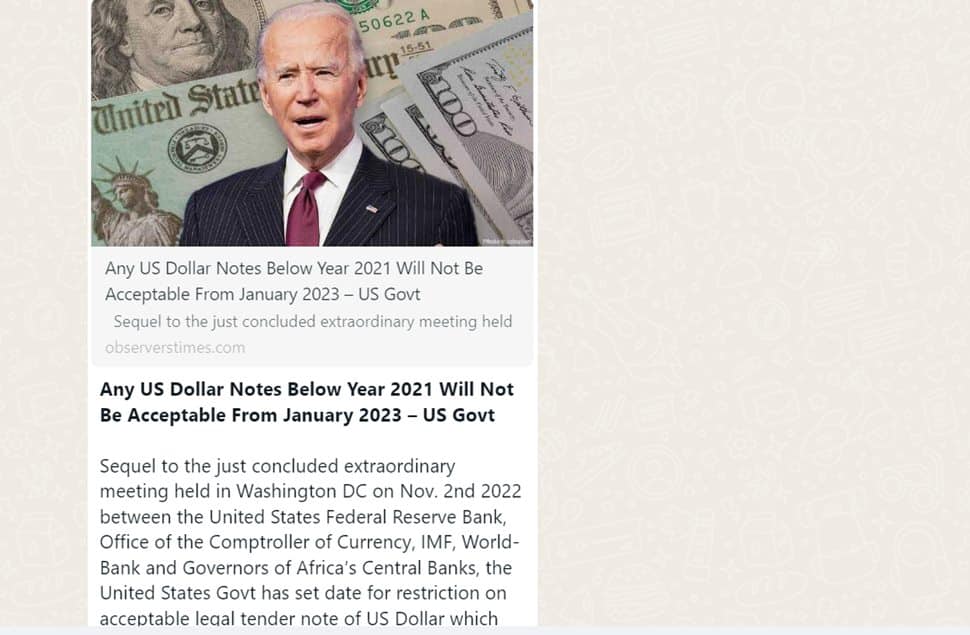 Now, the question is, has the US government really banned old dollar bills? The answer is NO. All the US dollar notes printed so far remain legal tender. The US Currency Education Program website run by the US government says, "Note that it is U.S. government policy that all designs of Federal Reserve notes remain legal tender, or legally valid for payments, regardless of when they were issued. This policy includes all denominations of Federal Reserve notes, from 1914 to present as per 31 U.S.C. § 5103."

The United States federal reserve says that people need not trade their old-design notes for new ones. "All U.S. currency remains legal tender, regardless of when it was issued," it said. The US currently has currencies in seven denominations which includes $1, $2, $5, $10, $20, $50, and $100.