NewsJammu and Kashmir
JAMMU AND KASHMIR

According to intelligence sources, 273 terrorists are currently active in the Valley, with plans to create disturbance and disrupt normalcy in Jammu and Kashmir.

New Delhi: Frustrated by the Indian government's decision to abrogate Article 370, which granted special status to the erstwhile state of Jammu and Kashmir, Pakistan has been desperately trying to unleash mayhem in India. According to intelligence sources, 273 terrorists are currently active in the Valley, with plans to create disturbance and disrupt normalcy in Jammu and Kashmir.

The sources added that these terrorists are planning to execute terror attacks on a large scale in the state in the coming days. According to sources, in Kashmir alone, at least 273 terrorists, with links to various terror groups are active. Out of these, at least 158 terrorists are active in south Kashmir, 96 in north Kashmir and 19 in central Kashmir.

The agency has identified at least 166 terrorists as locals while 107 others as foreigners. Among these, 112 terrorists belong to Pakistan-based Lashkar-e-Toiba, 100 with Hizbul Mujahideen, 59 with Jaish-e-Mohammad and three with Islamic militant group Al-Badr.

India revoked Jammu and Kashmir's special status on August 5. Reacting to India's move, Pakistan downgraded diplomatic ties with New Delhi and expelled the Indian High Commissioner.  Pakistan has been desperately trying to internationalize the Kashmir issue but India has asserted that abrogation of Article 370 in Kashmir is its internal matter and that 'Islamabad should accept the reality and stop anti-India rhetoric'. 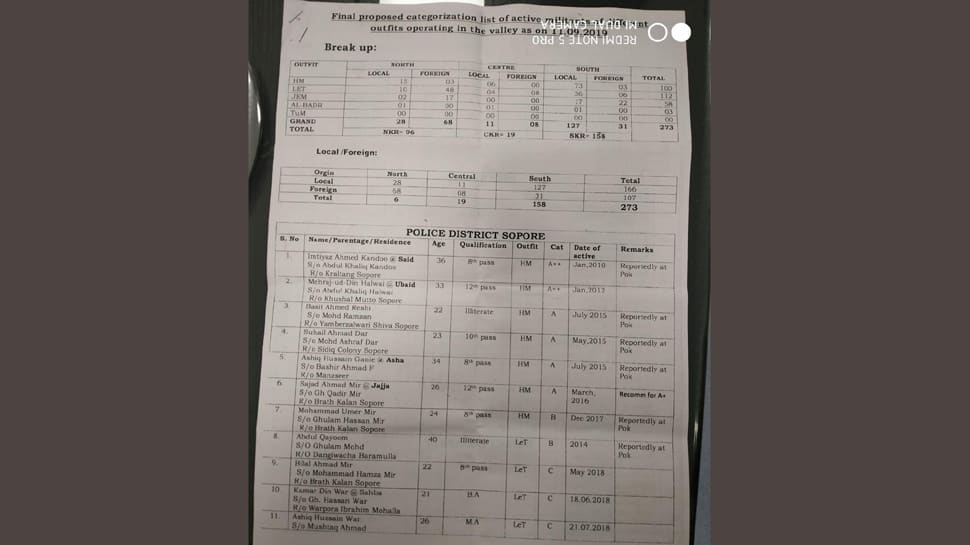 On September 11, ANI had reported that Pakistan has built 30 launch pads along the LoC to infiltrate militants into the regions of Karen, Gurez, and Gulmarg. Quoting intelligence sources, ANI said that Pakistan army and the ISI (Inter-Services Intelligence) are moving terrorists of Lashkar-e-Taiba and Jaish-e-Mohammed into these launch pads with an aim to launch terror attacks in Kashmir and other parts of India.