Amit Shah lashes out at Congress, says BJP will never allow separation of J&K from India

BJP chief Amit Shah on Saturday said it was because of Jana Sangh founder Syama Prasad Mookerjee that the tricolour was unfurled in J&K. 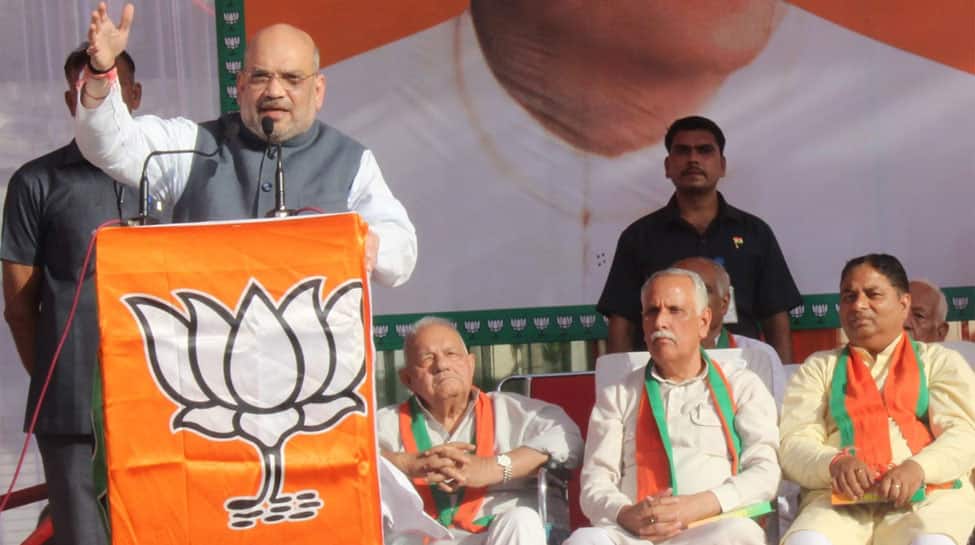 Jammu: BJP president Amit Shah on Saturday said his party will never allow the separation of Jammu and Kashmir from the rest of the country. He also lashed at Congress leaders Ghulam Nabi Azad and Saifuddin Soz for being on the 'same frequency' as the terrorists.

"Mr Soz, you can take hundreds of births but the BJP will not allow Kashmir to be disintegrated from India," Shah said at a rally in Jammu on his first visit to the state after his party pulled out of the coalition with PDP. "J&K is an integral part (of the country) and Syama Prasad Mookerjee has integrated it by laying down his life," he further said at the public meeting held to mark the 'martyrdom anniversary' of the Jana Sangh founder.

Former J&K CM Ghulam Nabi Azad recently said the security forces were 'killing more civilians than terrorists in the Valley' and Soz in his forthcoming book reportedly endorses former Pakistan president Pervez Musharraf's assessment that 'Kashmiris will opt for independence' if given a chance.

Shah said soon after Azad's remarks terrorist group Lashkar-e-Taiba came out with a statement supporting him. "What kind of frequency matching is this between LeT and the Congress," he said, asking party president Rahul Gandhi to explain how Azad and the LeT shared views.

The BJP chief went on to say that Rahul should tell both Azad and Soz to apologise to the people of the country. "I want to reassure people of J&K that nobody can disintegrate it from India," he said.

On the other hand, the Congress hit back at Shah and said he has no business to lecture the grand old party on nationalism as most of its leaders have shed their blood and sacrificed their lives for the nation.

"Amit Shah has no business to lecture the Congress party on nationalism because our topmost leaders have shed their blood and sacrificed their lives for the nation by becoming victims of terrorism and Naxalism. J&K is an integral and inseparable part of India. The BJP will never be able to realise the hard work which Congress-UPA did to usher peace in J&K, they have shamelessly squandered the mandate and shunned their responsibility," said Congress chief spokesperson Randeep Surjewala.

After plunging J&K into a deep turmoil, through an unethical opportunistic alliance,marred with a disquiet border, corruption, mal governance and false promises, in the last 4 years, Shri Amit Shah is shedding crocodile tears in front of the people of Jammu today

He added that after plunging J&K into a deep turmoil, through an unethical opportunistic alliance, marred with a disquiet border, corruption, mal-governance and false promises in the last four years, Shah is shedding crocodile tears in front of the people of Jammu.

The Congress leader said that the facts are sacrosanct and they speak for themselves, so instead of doing this choreographed drama, Shah should reflect upon hard facts.

"We again reiterate that the collapse of BJP-PDP government in J&K is a relief for people, but people of this country are closely watching the manner in which the BJP is running away from its responsibility. The tall talks of packages and development on the lines of 'Kashmiriyat' have become a 'grand mirage' under BJP," Surjewala alleged.