Preparations are in full swing in Jammu and Kashmir and Ladakh, as the two regions will be formally accorded the status of Union Territory on October 31. 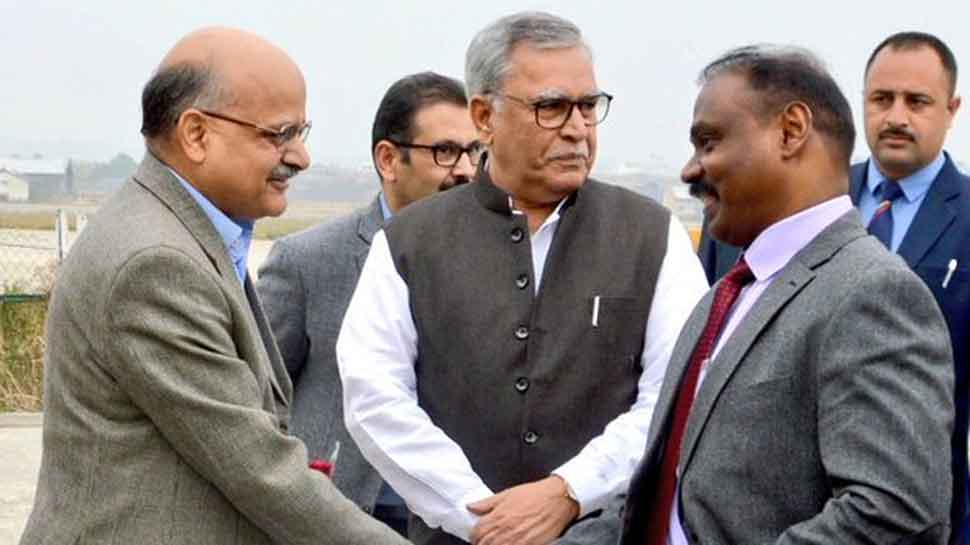 Srinagar: IAS officers Girish Chandra Murmu and RK Mathur, who will be the first Lieutenant-Governor of Jammu and Kashmir and Ladakh respectively, will be sworn in at separate functions in Srinagar and Leh on Thursday by Jammu and Kashmir High Court's Chief Justice Gita Mittal in Srinagar.

Murmu arrived in Srinagar on Wednesday to take charge of the new responsibilities. He was received by Advisor Farooq Khan and Chief Secretary BVR Subrahmanyam at Srinagar International Airport.

Girish Chandra Murmu, a 1985-batch Indian Administrative Service (IAS) officer of Gujarat cadre is seen as a close confidante of Prime Minister Narendra Modi, having been his Principal Secretary when Modi was Gujarat Chief Minister. He also served as expenditure secretary at the Centre before getting appointed as Lieutenant Governor of Jammu and Kashmir.

As per reports, no political leader will attend Murmu's oath-taking ceremony.

SS Khandare, a 1995 batch officer Indian Police Service officer of the Jammu and Kashmir cadre, has been appointed the head of police of Ladakh UT with effect from October 31, "until further orders", a Home Ministry statement said. Khandare is presently an Inspector General of Police in Jammu and Kashmir.

A day before the creation of the Ladakh UT, the Centre appointed senior IAS officer Umang Narula advisor to the Lt Governor of the Himalayan region and an Inspector General of Police 'head of police'. Narula is a 1989 batch officer of the Jammu and Kashmir cadre.

"Please have a clarification that my term as Adviser concludes and I carry good memories of my tenure my greetings and good wishes to all - former Governor, my fellow advisors, CS DG and all Secretaries and officials DCPs, SPs and esp SFs," Kumar tweeted.

He further extended good wishes to Army CAPFs and Jammu and Kashmir Police and locals and thanked Prime Minister Narendra Modi and Home Minister Amit Shah for all the support. "Army CAPFs and in particular Jammu and Kashmir Police and my good wishes to the public. Thank you Honourable PMO India and HMO India for all the support," he wrote. 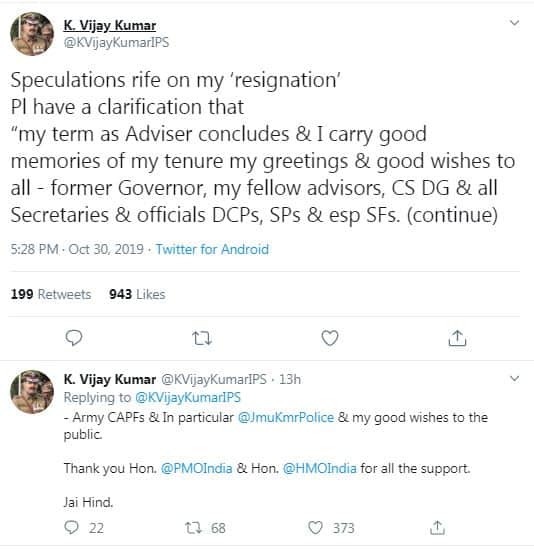 Preparations are in full swing in Jammu and Kashmir and Ladakh, as the two regions will be formally accorded the status of Union Territory on October 31.

The IAS, IPS and other central service officers and the Anti-Corruption Bureau (ACB) will be under the control of the LG and not the elected government of the UT of Jammu and Kashmir. The Act says the state government employees will be able to seek an option to serve in either of the two Union Territories and this transfer will be determined by the Lt Governor.

Mehbooba Mufti was the last chief minister of undivided Jammu and Kashmir whose tenure ended in June 2017 when the central rule was imposed thereafter her coalition partner BJP withdrew support. Satya Pal Malik is the last governor whose tenure comes to an end on Wednesday. He has been transferred and appointed as Governor of Goa.

Just a day before Jammu and Kashmir is divided into two UTs, the National Conference on Wednesday made a fervent last-minute appeal to the Centre to shelve the plan and maintain the statehood of the "200-year-old state" dubbed as 'crown of India'.

Notable changes in Jammu & Kashmir and Ladakh from October 31