Farooq Abdullah said "Let me remind the two nations that war is a plague that will have far-reaching consequences on the growth and development of the two nations." 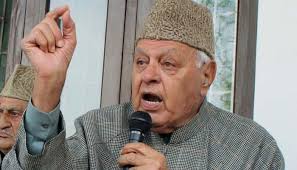 Srinagar: National Conference (NC) president Farooq Abdullah Wednesday called for de-escalation of tensions between India and Pakistan and asked both the countries to maintain "maximum restraint" for the "greater good of humanity".

"History bears testimony to the fact that war did not help both the neighbours resolve their long pending issues. It is in the interest of our region if both the countries shun war rhetoric," Abdullah said in a statement issued by the party.

"I urge both the countries to shun violence for the greater good of people living in both the countries especially for the people of Jammu and Kashmir," he added. The former chief minister said it was the people of Jammu and Kashmir, especially those living on both sides of the Line of Control (LoC) or the International Border (IB), who have to face the brunt of skirmishes between the two countries.

"Let the war belong to tragic past in the history. It should find no place on our agenda. Let me remind the two nations that war is a plague that will have far-reaching consequences on the growth and development of the two nations," he said.

The NC chief urged India and Pakistan to maintain "maximum restraint" as war, he said, was a little word of few letters but its effects were always harmful. "It brings destruction which cannot be compensated for many years. No peaceful mind wants war. I urge the peace loving people in both the countries to come forth and help de-escalate the situation," he said.

"I am pretty sure that the number of people who want peace far exceeds the hawkish people numerically, it is right time for the doves to come forward," he added.