Around three inches of fresh snowfall was experienced overnight around Jawahar Tunnel - the gateway to Kashmir, while rest of the highway was lashed by heavy rains. 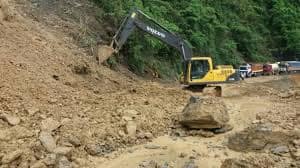 Jammu: The strategic Jammu-Srinagar National Highway remained closed for the second straight day Tuesday following a major landslide triggered by incessant rains in Ramban district, officials said.
Efforts are on to restore the 270-km highway - the only all weather road linking Kashmir with rest of the country - which was blocked near Moum-Passi in Ramsu area on Monday afternoon, leaving hundreds of vehicles stranded, the officials said.

Around three inches of fresh snowfall was experienced overnight around Jawahar Tunnel - the gateway to Kashmir, while rest of the highway was lashed by heavy rains. "The highway remains closed as of now and we are making efforts to make it traffic worthy as soon as possible," Deputy Superintendent of police, traffic (national highway) Pardeep Singh Sen told PTI.

He said the agency concerned has pressed its men and machines to clear the road of the landslide debris but continuous shooting of stones are hampering the clearance operation. Hundreds of Jammu-bound vehicles were left stranded at various places on the highway after the closure of the road.

A large number of stranded passengers bypassed the landslide hit area by crossing a stream by foot to reach their destination, while over 500 passengers were provided accommodation at various passenger sheds in Banihal on Monday night, the officials said.

They said the vehicles, which were stranded in vulnerable areas from Sherbibi to Ramsu, were taken to Banihal to avoid any untoward incident.