Youth in huge numbers participated in a recruitment drive organised by the Indian Army in Srinagar on Tuesday. 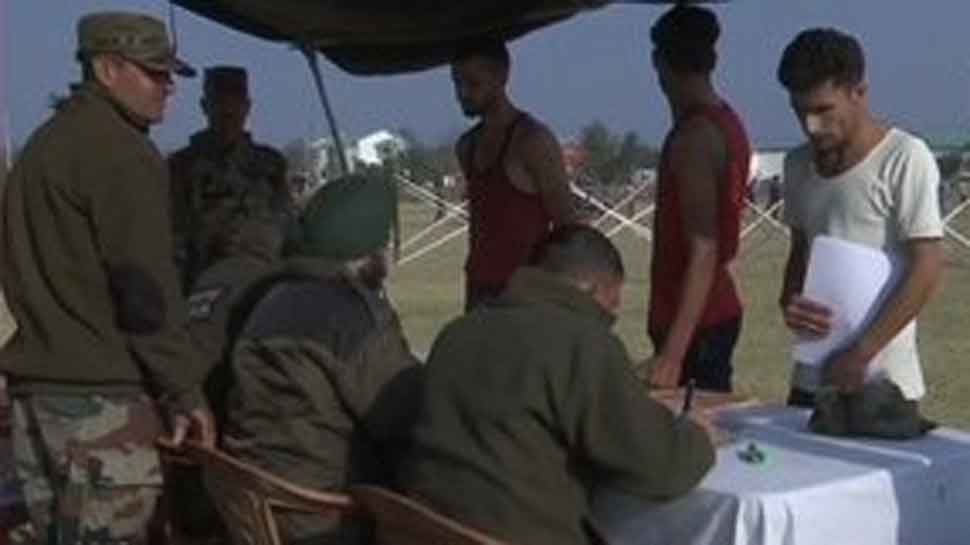 New Delhi: The Indian Army on Tuesday held a recruitment drive in Jammu and Kashmir's Srinagar in which scores of local youths of south Kashmir took  part. According to Commanding Officer RR Sharma, close to 6500 youth appeared for the screening and physicals out of which 550 were shortlisted.

After all the examinations, they will be inducted into 162 Territorial Army.

Jammu&Kashmir: Recruitment drive for territorial army underway in Srinagar. Commanding Officer RR Sharma says,"Close to 6500 youth appeared for screening and physicals. We have shortlisted approx 550 youth. After all examinations, they will be inducted into 162 Territorial Army." pic.twitter.com/jHX6YT5fQQ

Interestingly, a good number of female candidates also took part in the ongoing recruitment drive for Special Police Officers (SPOs) in Srinagar today. "In the ongoing recruitment of SPOs, starting from October 9, as many as 4,072 candidates including a large number of females are competing for their final selection," Anita Sharma, Senior Superintendent of Police told news agency ANI.

"These female candidates are from backward districts of the state. They are feeling encouraged. Most of them have qualified marathon, shot-put, and other tests. They want to help their families. They also want to be independent," she added.

"I have qualified 1,000-meter long run and shot-put outdoor tests. Now the height and documents are to be examined. I want to serve my country and have no fear in the mind," said one of the girl participants.

"This is the second time I have come. Last time, I didn`t qualify but I hope this time I will be selected. I was always passionate about joining the police. It will also make me financially sound," said another candidate.

Although, the minimum qualification required to be an SPO is matriculation, many of the aspirants were intermediates and some even graduates.

15 detained in Jammu and Kashmir over truck driver's killing