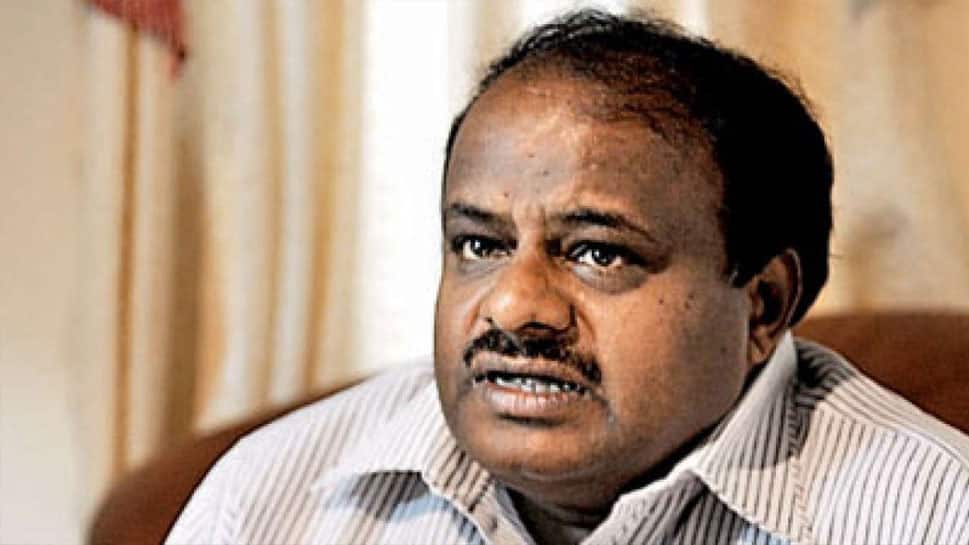 Bengaluru/New Delhi: Karnataka's ruling Congress-JDS coalition and opposition BJP on Monday traded allegations of making a renewed bid to poach MLAs in a fresh political war just ahead of the Lok Sabha polls.

Amid media reports that six to eight Congress MLAs are ready to cross over to the BJP and some lawmakers of the ruling coalition having gone incommunicado, Chief minister H D Kumaraswamy said he has "sufficient numbers" to run a stable government.

He asserted there was no question of "instability" in his government.

Adding to the speculation was BJP holding all its 104 MLAs together in Delhi itself and conducting meetings for them.

The BJP legislators had gone to the national capital for the party national council meeting which ended on Saturday.

As the Congress-JDS combine accused the BJP of luring away its MLAs offering bribes and other allurements, BJP state chief B S Yeddyurappa rubbished reports his party was attempting 'Operation Lotus' to topple the state government. 'Operation Lotus' is a reference to BJP's alleged bid to lure several opposition MLAs to defect to ensure stability of its then government headed by Yeddyurappa in 2008.

He said there was no truth in the charge and instead alleged that the Congress-JD(S) combine was trying to woo his party MLAs.

"It is not us, but they (JDS-Congress) have started horse trading. We will stay in Delhi one or two days because Kumaraswamy is trying his level best to contact our MLAs and horse trading has started," Yeddyurappa told reporters after meeting state BJP MLAs and MPs in Delhi.

The BJP is "alert and careful" as the chief minister is trying to lure our MLAs using "power and money", he said.

"Kumaraswamy is trying to contact BJP MLAs and has offered a ministerial post to a Kalburgi MLA," Yeddyurappa alleged and said the ruling combine is luring BJP state legislators despite having majority numbers.

Congress also said that Yeddyurappa was making "futile attempts" to destabilise his government.

Kumaraswamy said he enjoyed the support of 120 MLAs and alleged that Yeddyurappa was making "futile attempts" to destabilise his government.

"The coalition government enjoys support of 120 MLAs," he said.

He also said, "I have noticed reports in sections of the media (about 'Operation Lotus'). Today too I saw a media report stating that on January 17, President's rule will be imposed in the state.

"I don't know who is feeding such reports to the media.. I was surprised to see the report."

Asked about Water Resource Minister D K Shivakumar's claim that three Congress MLAs were camping at a hotel in Mumbai in the "company of some BJP leaders", Kumaraswamy said they were in constant touch with him.

Not revealing their names, he said "They are my friends. Those MLAs in Mumbai or 104 BJP MLAs who are in Delhi are all my people, so there is no question of instability to this government."

"(The Congress) MLAs have gone to Mumbai after bringing it to my notice; they are in constant touch with me," the chief minister said.

"I spoke to them at 7:30 in the morning. They have gone for personal reasons, and there is no need to add politics to it," he added.

"If my government is facing instability, is it possible for me to be at ease?" he asked.

Shivakumar on Sunday said the BJP's 'Operation Lotus' was for real, alleging that three Congress MLAs were camping in a Mumbai hotel.

He had said the chief minister was being "lenient" towards the BJP, by not exposing it.

"BJP members have gone for their executive meeting and to plan a strategy for Lok Sabha polls to win more seats. What should I do if their meeting is being seen as a threat to this government?" the chief minister asked.

Kumaraswamy said he knew all about who the BJP was contacting and what kind of offers it was using to lure them.

He expressed confidence that no MLA from the ruling coalition would defect to the saffron party.

Asked about the Congress MLAs camping in a Mumbai hotel, he said "Let them be..Why they have gone, nobody knows. They might have gone on holiday or to visit temples or meet leaders."

Accusing the BJP of trying to poach Congress MLAs, Parameshwara said it would not be successful.

Yeddyurappa said the BJP legislators would be in New Delhi for "one or two days" and would later go to their constituencies and begin preparations for the Lok Sabha polls in all the 28 constituencies.

Reports suggest that BJP legislators in Delhi were likely to be shifted to Gurgaon, to keep its numbers in tact, with Congress and JD(S) allegedly planning to poach BJP MLAs as a retaliatory measure to Operation Lotus.

However, Yeddyurappa clarified "There is no need for us to do any "resort politics", we are not doing also", he said, adding "a few of them will be in Delhi, a few are going to Gurgaon, they will go and come back."