Nearly 10 of these MLAs were spotted in Renaissance hotel in Mumbai's Powai, sources told Zee News. 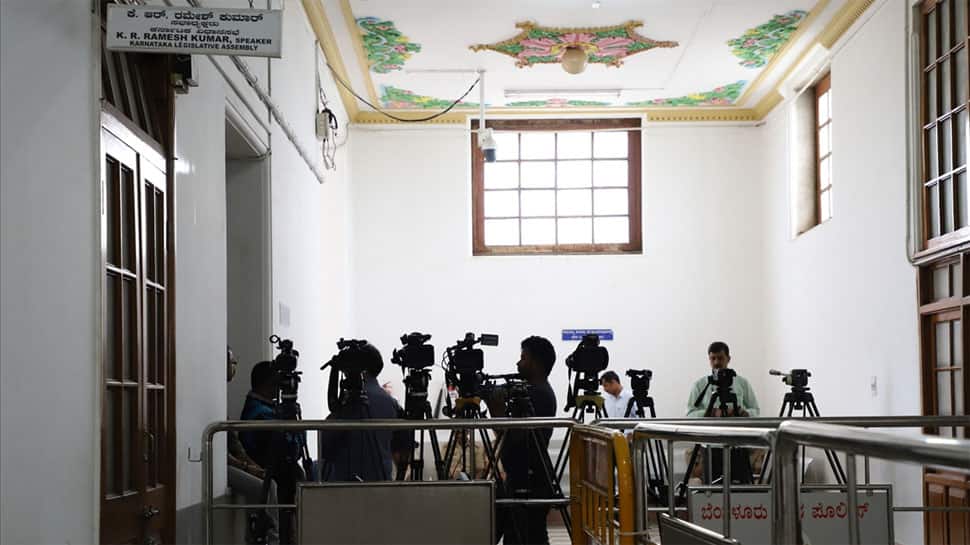 BENGALURU: Uncertainty continued to loom large on the Congress-JD(S) coalition government Tuesday. Twelve Congress legislators skipped the Congress Legislative Party meet, further fuelling rumours of internal strife and resignations. Meanwhile, the 15 rebel MLAs from both the political parties remained untraceable with sources suggesting that they are camped near Pune and are likely to return to Bengaluru on Tuesday evening.

MLAs Tukaram, MTB Nagaraj and Sudhakar cited health reasons for skipping the CLP meeting. Baig, who was suspended for anti-party activities earlier, submitted his resignation to the Speaker on Tuesday. “I have voluntarily given resignation to Speaker. Congress is questioning me repeatedly. I have already explained myself to them and can’t do it again. They are furious because I have spoken the truth. They have suspended me. Hence now I’m going to submit my resignation to speakers office," said Baig.

Nearly 10 of these MLAs were spotted in Renaissance hotel in Mumbai's Powai, sources told Zee News.

Congress submitted a petition to the Karnataka Speaker seeking disqualification of the rebel MLAs on grounds of defection and anti-party activities. They also demanded a ban on them from contesting election for six years.

“Karnataka Congress is seeking disqualification of members for their anti-party activity. They colluded with BJP. I request them to come back and withdraw their resignation. We've decided to file petition before speaker to disqualify them and request him to not accept resignation,” said senior party leader and former Karnataka Chief Minister.

Meanwhile, the rebel legislators, who left Karnataka on Saturday evening, are still untraceable. The legislators are reportedly staying near Satara, on the outskirts of Pune. The MLAs have requested Speaker KR Ramesh Kumar to accept the resignations and are likely to return to Bengaluru on Tuesday evening

The JDS, on the other hand, shifted their MLAs and MLCs to resort in Devanahalli in Karnataka.

Several Youth Congress workers took out a `Save the Democracy` march against the Bharatiya Janata Party in Bengaluru.

BJP is also scheduled to hold its legislative party meet later on Tuesday.