While Karnataka minister DK Shivakumar claims there is no enmity with rebel Congress MLAs camping in Mumbai, he was met with loud chants when he attempted to meet the said MLAs. He was also stopped by Mumbai Police as the rebel MLAs said they felt threatened. 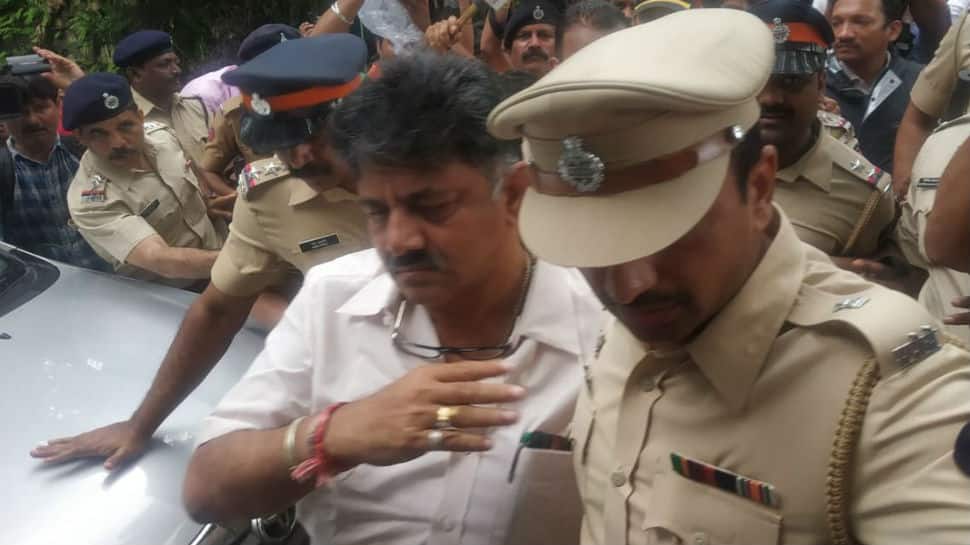 Scenes of chaos and sloganeering were witnessed on Wednesday morning in front of a swanky Mumbai hotel where Karnataka minister DK Shivakumar attempted to reach out to rebel MLAs. His attempts were futile as Mumbai Police threw a security cover here and supporters of some of the MLAs chanted slogans against the Congress leader.

The drama unfolded quite early in the morning when the 10 rebel Congress and JDS MLAs reportedly wrote to Mumbai Police and asked for security cover. "We've heard CM and DK Shivakumar are going to storm the hotel, we feel threatened," he allegedly informed the cops. Even before Shivakumar reached the Renaissance Hotel, many supporters of the rebel MLAs had gathered outside to chant 'Go back' slogans.

Once Shivakumar did reach the hotel, his way in was blocked. He had a conversation with police officials and was later escorted away from the hotel gates where he met with mediapersons and claimed that there was no truth in rebel MLAs saying they felt threatened. "How can they feel threatened when they themselves called me and asked me to rescue them from here," he said. "We are a family, every family has some disputes and it gets sorted out eventually."

Shivakumar also said that he had every right to be in the hotel because he had booked a room here. "I've booked a room here. My friends are staying here. There has been a small problem, we've to hold negotiations. We can't go for a divorce immediately.  There is no question of threatening, we love and respect each other," he said.

There has not been much love and respect on display over the course of the past week with the Congress-JDS government in Karnataka facing an existential crisis. A number of MLAs from both parties tendered their resignations - yet to be accepted by Karnataka Assembly Speaker, to plunge the HD Kumaraswamy-led government into crisis. Both Congress and JDS have been working overtime to placate the dissenting MLAs and state ministers from both parties have resigned in a bid to possibly accommodate the rebels in the subsequent Cabinet reshuffle.

The Bharatiya Janata Party, however, has said that the Congress-JDS government has lost all right to remain in power and that Kumaraswamy should quit.