This is being done as a mark of respect to Wing Commander Sahil Gandhi who was killed in the tragic crash. 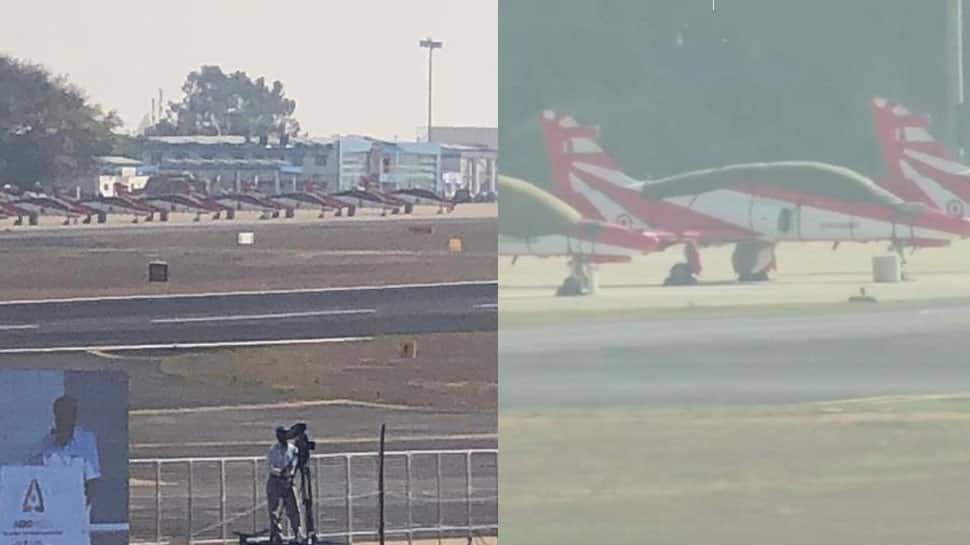 Bengaluru: There will be no Surya Kiran aerobatics display at the Aero India 2019 a day after two aircraft belonging to the Indian Air Force's (IAF) aerobatic crashed in which a pilot was killed and two others were injured.

This is being done as a mark of respect to Wing Commander Sahil Gandhi who was killed in the tragic crash. Instead, the Surya Kiran team will fly the missing man formation, said reports.

Air Marshal Rakesh Kumar Singh Bhadauria had on Tuesday announced that Surya Kiran will not be a part of Aero India 2019 beginning on Wednesday.

Bengaluru: IAF's Surya Kiran Aerobatics Team Aircraft standing with their canopies covered on runway behind the inaugural venue of #AeroIndia2019. The aircraft won’t participate in it due to the loss of two aircraft and one pilot yesterday in a mid-air collision during rehearsal. pic.twitter.com/96u9j5eTHZ

Video clips of the incident showed the two jets crashing to the ground and bursting into flames near Yelahanka airbase after brushing against each other mid-air, a day ahead of the five-day event.

"We had an unfortunate incident and an investigation will take place. Surya Kiran won't be part of display," Bhadauria told reporters.

All other displays will go ahead as planned, he added.

The Hawk jets were performing a manoeuvre when one was flying inverted carrying a pilot and the other below it with two pilots moments before they hit each other and spun out of control, according to police and eye witnesses.

The incident occurred at around 1150 hours while practising for the air show,the Defence PRO office said in a statement.

Throwing light on the mishap, Bhadauria said, "In this particular incident, they were doing a mirror image. The margin of error is very low. Whether it was an execution error or a bird hit that will be found out in the investigation".

Earlier, Karnataka Director General of Police and Chief of Fire and Emergency Services MN Reddi said, "No major damage to any house in ISRO colony. Fire Force has completely doused the fire."

Meanwhile, the 12th edition of the biennial Aero India 2019 air show took off on Wednesday with a dazzling flying display of aircraft at the Indian Air Force`s (IAF) Yelahanka base here.

After Defence Minister Nirmala Sitharaman flagged off the five-day aerospace and defence expo, about 5,000 guests and invitees were treated to a two-hour spectacular flying display of fighter jets, helicopters and civilian aircraft.

The multi-role medium combat aircraft Rafale of the French Dassault Aviation was a clear winner with its daring aerial feats stealing the show at the aerial display visitors` area.

The pilot of the French Air Force paid tribute from the aircraft while flying to IAF pilot Wing Commander Sahil Gandhi, who died here on Tuesday after two Surya Kiran Hawk aircraft collided and crashed while rehearsing for the air show.

The IAF`s Sarang team in Advanced Light Helicopters (ALH) performed breathtaking formations under a clear sunny sky as a visual treat to the viewers.

The Light Combat Aircraft (LCA) Tejas, Jaguar and Sukhoi-30 aircraft flew in a `Missing Man` formation as a tribute to Gandhi.