Lakhs of women from across the country participated in this grand shoulder-to-shoulder parade, which was organised partially by the government. 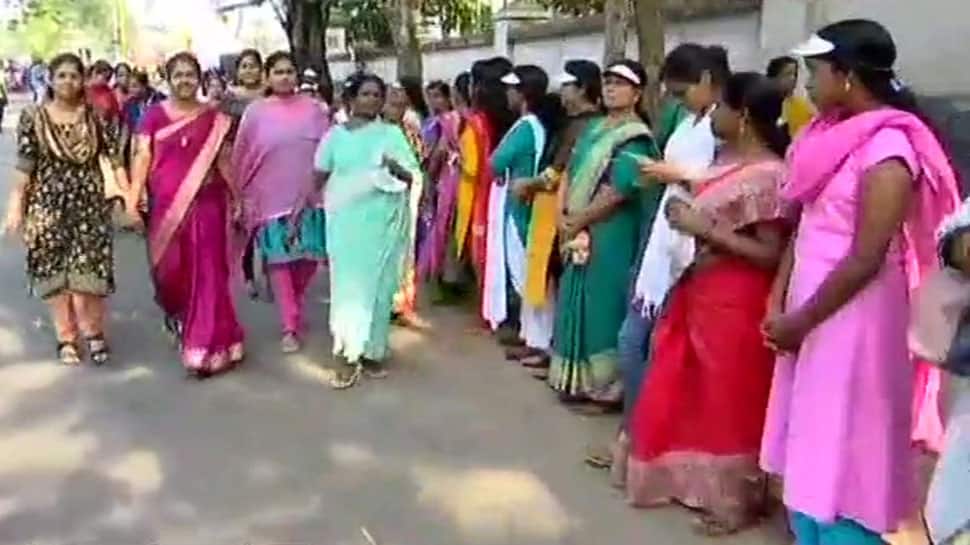 Thiruvananthapuram: In a wonderful initiative to support gender equality and renaissance value, around 50 lakh women formed a 620-km-long `Women`s Wall` in Kerala on Tuesday.

The wall was formed across the national highway which stretched from the northern tip of Kasaragod to the southern end in Thiruvananthapuram.

Around 50 lakh women in Kerala formed a 620 km 'Women's Wall' along the national highway from Kasaragod district to Trivandrum, to safeguard renaissance values; Earlier visuals from Trivandrum pic.twitter.com/fM8R78Sddk

Lakhs of women from across the country participated in this grand shoulder-to-shoulder parade, which was organised partially by the government. The women demonstrators also raised Sabarimala issue.

In September last year, the Supreme Court lifted the ban on entry of women of menstrual age (10-50 years) inside Sabarimala temple, however, no woman of the previously-forbidden age group has yet been able to enter the Lord Ayappa shrine due to widespread protests.

Speaking to ANI about the event and the ongoing Sabarimala issue, a demonstrator said: "Gender equality is an aspect of freedom. Women have been launching protests, marches and strikes to have access to their rights enshrined in the constitution. Who can prevent a devotee from reaching God? It is a golden moment for women to show that it is they have got a right to enter the temple and no one can stop them from doing so."

"The movement is organised partly by the government for the participation of women from North to South to say that we want to work ahead. We want gender equality and justice as we`re living in a democratic society," another woman said.

Further reacting on Sabarimala temple issue, she stated, "It`s important that there must be a conducive atmosphere. If women have failed to enter Sabarimala till today then RSS, BJP and Congress are responsible for it. And women force today is replying to these anti-women forces and we`re saying that it is a land of both men and women where no one can deny women of their basic rights."