Governor Arif Mohammed Khan administered the oath of office to 76-year-old Pinarayi Vijayan in a low-key function at the Central Stadium here, which was held completely in adherence with the COVID protocol. 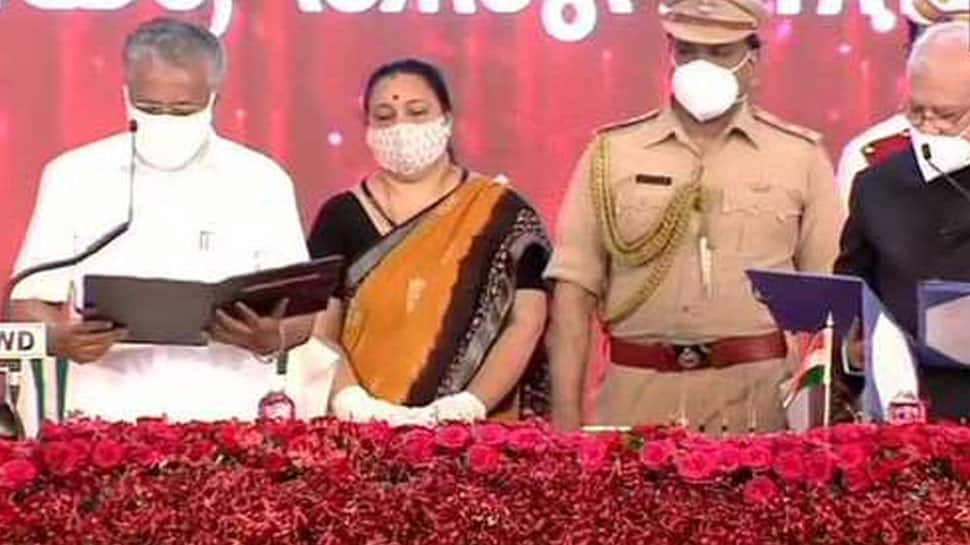 NEW DELHI: Pinarayi Vijayan was on Thursday sworn as Kerala's Chief Minister for the second time in the shadow of the Covid-19 pandemic in the state.

The oath ceremony took place with Covid protocols in place at the Central Stadium in Thiruvananthapuram. The CPI(M) veteran had led the Left Democratic Front (LDF) to an unprecedented consecutive victory in the April 6 assembly polls.

Governor Arif Mohammed Khan administered the oath of office to 76-year-old Pinarayi Vijayan in a low-key function at the Central Stadium here, which was held completely in adherence with the COVID protocol.

Thiruvananthapuram: Pinarayi Vijayan takes oath as the Chief Minister of Kerala, being sworn in by Governor Arif Mohammad Khan. pic.twitter.com/HyWRDh9u3u

Opposition Congress-UDF leaders kept away from the function in view of the COVID-19 spread. The Kerala High Court had on Wednesday directed the government to restrict the number of participants in the ceremony in view of the pandemic.

Vijayan also became the only third Chief Minister in the state to be re-elected and the first to continue in office after completing a full term.  The 76-year-old, who joined the Communist Party of India Marxist (CPM) in 1964 was elected as the 12th chief minister of Kerala after LDF came to power in 2016.

In his first term, he had a tumultuous journey faced with opposition within the party as well as having to work really hard to gain popularity among the masses.

In November 2017 when Cyclone Ockhi hit Kerala, the Vijayan government was criticised for mishandling the disaster, which killed dozens of people, devastated fishing villages in Thiruvananthapuram, flooded farmlands and damaged houses.

But during the floods in the state in 2018, Vijayan emerged as a great manager.
During the crisis, he remained in the state capital to coordinate and oversee the rescue activities and relief measures personally, which increased his popularity among the masses.

Over the past five years, Vijayan has managed to cement his position in the state.

During the Sabarimala Temple controversy -- which erupted following the state government`s efforts to implement the Supreme Court`s order on lifting a centuries-old ban on entry of women of menstruating age to the temple -- Vijayan stood steadfast in his decision of implementing the apex court`s order despite massive protest by opposition parties in the state.

The Sabrimala controversy has been ferociously raised by the Opposition, including the Bharatiya Janata Party, during the campaign for the assembly elections. Vijayan has also been the target of the Opposition in the infamous gold-smuggling case.

The gold-smuggling case relates to the seizure of about 30-kilogram gold worth Rs 14.82 crore from diplomatic baggage at Thiruvananthapuram International Airport in July 2020, which is being probed by the Enforcement Directorate, Customs and the National Investigation Agency.

M Sivasankar, former principal secretary to the chief minister who is currently suspended, was arrested in connection with the case. The case is being probed by various central agencies, including the Enforcement Directorate.

Vijayan, a Polit Bureau member of the Communist Party of India (Marxist) served as the secretary of the Kerala State Committee of CPI(M) from 1998 to 2015. He also served as Minister of Electricity and Co-operatives from 1996 to 1998 during E K Nayanar`s tenure as chief minister of Kerala.

Three times Vijayan was elected to the state Legislative Assembly in 1977, 1991 and 1996. Vijayan won from Dharmadom constituency in the 2016 assembly elections and was sworn in as the 12th Chief Minister of Kerala on May 25, 2016.

Born in May 1945 into a poor toddy tapper`s family in Pinarayi in Kannur district is the youngest son of his parents. His wife is Kamala Vijayan and they have a daughter and a son. During his days at Government Brennen College, where he read economics, Vijayan participated in student union activities and joined the Communist Party in 1964.

After MV Raghavan left the party, he became Kannur district secretary of CPI(M). He became a member of the state secretariat within three years and was elected to the CPI(M) politburo in 2002.

Bharatiya Janata Party (BJP) and Bharath Dharma Jana Sena are the main constituents of the NDA.