The Travancore Devaswom Board, which manages the Sabarimala temple, is slated to meet on Tuesday. 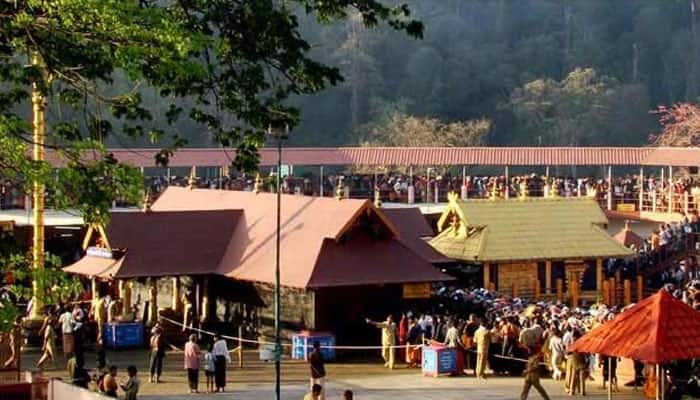 THIRUVANANTHAPURAM: The chief priest of the Sabarimala temple has informed Travancore Devaswom Board (TDB) that purification rituals had been held at the famous temple dedicated to Lord Ayyappa.

Kandararu Rajeevaru, the 'tantri' (head priest) had earlier requested the TDB for more time to explain the purification rituals.

Chief Priest of Sabarimala temple has given an explanation to Travancore Devaswom Board on "purification" ritual conducted at the temple after entry of 2 women in the age group b/w 10 to 50 years. Board had earlier asked him for an explanation. Board's meeting to be held today.

The purification rituals were performed days after two women of menstruating age entered the temple shrine amid vociferous protest by the right-wing Hindu outfits.

The Travancore Devaswom Board, which had earlier sought an explanation from the chief priest, is slated to meet today.

The apex temple body in Kerala had on Monday granted two weeks additional time to the head priest of Sabarimala Lord Ayyappa Temple to submit his explanation for the purification rituals performed after two women of menstruating age entered the hill temple earlier this month.

The decision of the TDB, which manages the shrine, was taken after the Lord Ayyappa Temple was closed marking the culmination of the over two-months long tumultuous annual pilgrimage season which witnessed frenzied protests by devotees and right-wing activists against the entry of young women.

The TDB chief also said the Board has all the right to seek an explanation from the head priest.

After 42-year old Bindu and Kanakadurga, 44, offered prayers at the Lord Ayyappa temple on January 2, the sanctum sanctorum was closed under tantri's directive to perform the 'purification' ritual, which is carried out when there is the violation of temple customs.

Senior Kerala minister G Sudhakaran had even called him a "Brahmin monster" for conducting the ritual.

"The tantri is a symbol of caste devil. He is not a Brahmin. He is a Brahmin monster. If a Brahmin becomes a monster, he will be a terror," the minister had said.

Meanwhile, the Kerala State Commission for Scheduled Caste and Scheduled Tribes Monday sent a show-cause notice to Rajeevaru over the purification rite performed at Sabarimala.

S Ajaya Kumar, a member of the Commission, said the show-cause notice was sent as the tantri had failed to respond to their earlier notice seeking his appearance before the panel on January 17.

"Bindhu, one of the women who entered the Sabarimala shrine, was a Dalit. We have received 2-3 complaints stating that the purification rite was performed because of that and the ritual was against her," he said.

Earlier, there were media reports that the CPI(M)-led LDF government was planning to remove the Sabarimala tantri for conducting the purification rituals but the TDB had rejected the reports.

The temple body had even made it clear that there were several court verdicts on the appointment and powers of the tantri of Hindu shrines and the TDB could not take a decision without taking into account all these.

The Kerala Tantri Samajam, an umbrella organisation of head priests of temples in the state, had said that they would approach the Supreme Court and the union government if the state government takes any decision to remove Rajeevaru.

Sabarimala had witnessed intense protests against the LDF government's decision to implement the landmark September 28, 2018, Supreme Court verdict permitting women of all age groups into the hill shrine.

Traditionally, women of menstruating age or in the age group of 10 to 50 years were not allowed to enter the temple as the deity, Lord Ayyappa, was a "Naishtika Brahmachari" (perennial celibate).