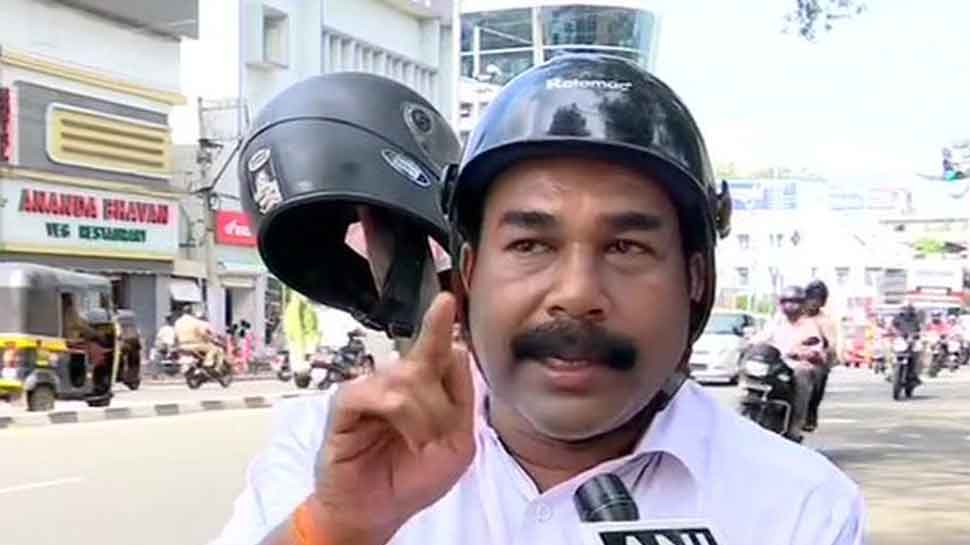 New Delhi: Kerala Shiv Sena leader Peringammala Aji on Monday staged a protest outside the secretariat in Trivandrum against the state government for making helmets compulsory for two-wheeler pillion riders in the state from December 1.

Speaking to ANI, Aji said that he welcomes the decision but he is worried about the fine which is also imposed on middle-class families. "I completely agree with the decision. But middle-class people also use two-wheelers. When court and government make helmet mandatory for pillion riders, They all will be fined Rs 500-1000 if they do not wear helmets. It is a burden on them," he said.

Kerala: Shiv Sena leader Peringammala Aji staged a protest in front of the state secretariat in Trivandrum y'day, against the state govt's move of making wearing of helmets compulsory for two-wheeler pillion riders in the state; the rule had come into effect from Dec 1. (02.12) pic.twitter.com/4bwCuj2zLx

Peringammala Aji, Shiv Sena: I completely agree with the decision. But middle class people also use two-wheelers. When court & govt make helmet mandatory for pillion riders, they'll be fined Rs 500-1000 if they don't wear helmets. It's a burden. Decision should be reviewed.(2.12) pic.twitter.com/iwlOSu2Ni7

The Sena leader urged the state government to review its decision.

On December 1, Kerala government implemented the High Court directives of making helmets mandatory for pillion riders. Now, police can conduct vehicle checking to ensure two-wheeler riders are adhering to the new directives. Not wearing a helmet will invite a fine of Rs 500. Transport Commissioner directed a strict checking of vehicles.Police are also planning to conduct an awareness programme before the strict implementation of the new rule.

However, during the initial phase, police plan to advise the pillion riders to wear the helmet before levying a fine.

On the first day, in the state capital, the response was mixed. Many people riding pillion were yet to start wearing helmets. But most of the people welcomed the implementation of mandatory safety cover for pillion riders.