The opposition leaders on Monday (November 29) issued a joint statement condemning the “unwarranted and undemocratic” suspension of 12 Rajya Sabha MPs for the rest of the Winter Session of the Parliament. 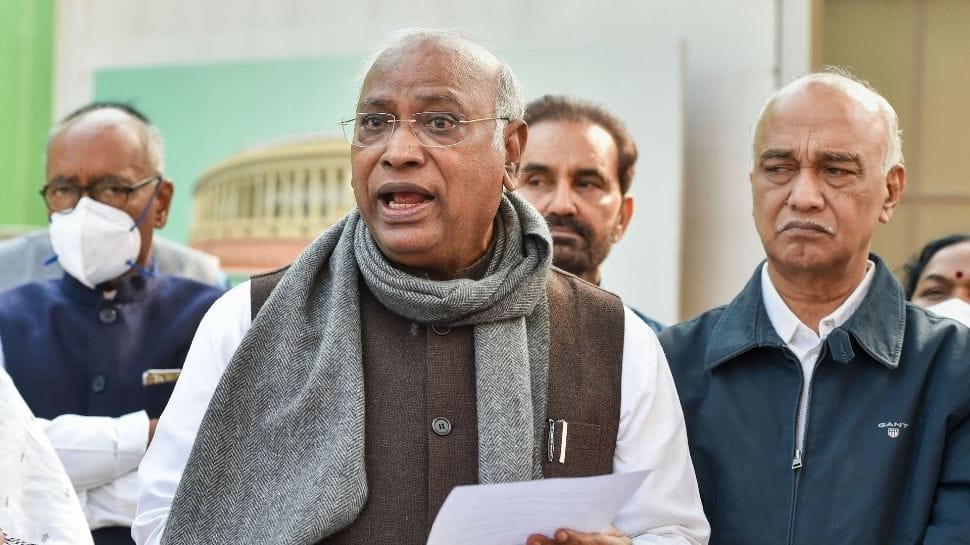 New Delhi: The opposition leaders on Monday (November 29) issued a joint statement condemning the “unwarranted and undemocratic” suspension of 12 Rajya Sabha MPs for the rest of the Winter Session of the Parliament.

Calling the suspension undemocratic, the opposition said that the move was a violation of the Rules of Procedure of Rajya Sabha and the Conduct of Business of the House.

12 Rajya Sabha MPs have been suspended for the rest of the winter session of the parliament over their misconduct and unruly behaviour during the last session.

The house, which is adjourned for the day, will resume the proceeding on November 30.

RT-PCR test upon arrival is compulsory following which they have to mandatorily undergo 7-day quarantine. After this, they've to undergo RT-PCR test again, Tope told ANI.

Charles Pyngrope has been appointed as the TMC state president in Meghalaya.

Jack Dorsey stepped down as Twitter CEO on Monday. Parag Agrawal will be the new CEO of Twitter.

The Ministry of External Affairs on Monday said that India is prepared to supply essential life-saving drugs, test kits, gloves, PPE kits and medical equipment such as ventilators to the African countries if required amid the Omicron outbreak.

India has cleared all orders placed so far by COVAX for supplies for Covishield vaccines in to African countries like Malawi, Ethiopia, Zambia, Mozambique, Guinea and Lesotho, said MEA on Monday.

If the suspended members of Rajya Sabha seek apology as per the rules, then a deliberation may be done regarding the future, ANI reported quoting government sources

The Reserve Bank of India (RBI) on Monday imposed a Rs 1 Crore Penalty on Union Bank of India, for non-compliance with certain provisions of directions issued by RBI contained in “RBI (Fraud-Classification& Reporting by commercial banks&select FIs) Directions 2016” & “Guidelines on Sale of Stressed Assets by Banks," reported ANI.

Sanyuka Kisan Morcha will hold an urgent, special meeting on December 1 to discuss the future course of action for the ongoing protest.

Another meeting will take place on December 4

The minister also informed that Rs 5000 would be credited in accounts of labourers.

We want the withdrawal of cases against farmers, legal guarantee for MSP; Centre has time till November 30 to reply to demands: Punjab Farmer leaders

Sayunkta Kisan Morcha will hold a meeting on December 1 to discuss the future course of action.

Opposition issued a joint statement condemning the suspension of 12 MPs in Rajya Sabha on Monday.

12 Rajya Sabha MPs were suspended for the rest of the Winter session on Monday due to their unruly behaviour in the last session.

The manner in which farm laws have been repealed without debate shows govt is afraid of discussion: Congress leader Rahul Gandhi

Lok Sabha has been adjourned till 11 am on Tuesday.

Rajya Sabha: On the first day of the Winter Session of the Parliament, the Farm Laws Repeal Bill 2021 has been passed in the Upper House. It was tabled by Union Agriculture Minister Narendra Singh Tomar.

The Bill has been passed in the Lok Sabha. pic.twitter.com/dXsbwZKVRy

Adhir Ranjan Chowdhury: The government blames us for not letting the House function. But Farm Laws Repeal Bill 2021 was introduced and passed without discussion. The Opposition had demanded a discussion on it. Even though the government has repealed the farm laws, its 'Mann ki Baat' is something else.

The Farm Laws Repeal Bill, 2021 passed by Lok Sabha amid ruckus by Opposition MPs. Leader of Congress Party in Lok Sabha Adhir Ranjan Chowdhury demands discussion on the Bill in the House

Lok Sabha has now been adjourned till 2 pm today.

Leader of Congress Party in Lok Sabha Adhir Ranjan Chowdhury demands discussion on the Bill in the House pic.twitter.com/2QAyOAVGq1

Lok Sabha adjourned till noon amid slogans, shortly after Parliament convenes for the Winter Session.

Speaking at the start of the Parliament session. https://t.co/IvHdsOocbx

Winter session of Parliament: Congress MP Manish Tewari gives adjournment motion notice in Lok Sabha to discuss 'to direct the government to create a record of farmers who lost their lives during farm laws protest and give compensation to their families'.

Delhi: The Winter Session of Parliament is set to begin today (November 29) with the BJP-led government having as many as 26 new bills on its agenda. The government will also list a bill to repeal the three contentious farm laws. The Farm Laws Repeal Bill is scheduled to be introduced in the Lok Sabha.