Gambhir had rejected the charge and sent a notice to Chief Minister Arvind Kejriwal, his deputy Manish Sisodia and Atishi for alleged defamation. 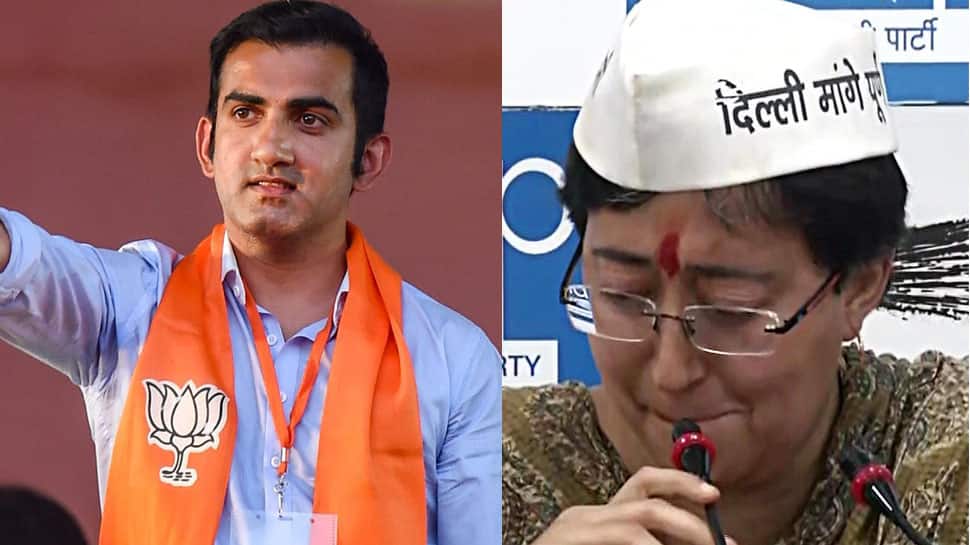 New Delhi: AAP's East Delhi candidate Atishi on Friday complained to the Delhi Commission for Women over an "obscene and derogatory" pamphlet targeting her distributed in the constituency, saying she holds the BJP and her rival from the party Gautam Gambhir directly responsible. Gambhir had rejected the charge and sent a notice to Chief Minister Arvind Kejriwal, his deputy Manish Sisodia and Atishi for alleged defamation, demanding that they withdraw the allegation and tender an unconditional apology over the matter.

The AAP too sent a notice to Gambhir and the BJP Friday demanding an apology over the pamphlet row, failing which, it said, "appropriate legal proceedings will be initiated". Filed by advocate Mohammad Irsad, from the legal cell of the AAP, the notice termed the pamphlets "offending publication" and alleged that those were published by Gambhir and the BJP.

The AAP said the apology should be handed over to it personally in writing by BJP and Gambhir as well as should be printed in newspapers within 24 hours of receiving of the notice, failing which "appropriate legal proceedings will be initiated". Atishi on Thursday broke down while reading the pamphlet against her, that she alleged has been distributed in the constituency at the behest Gambhir, a charge denied by the cricketer-turned-politician. The BJP alleged that the AAP was staging such incidents.

Atishi submitted her complaint to the DCW in which she called it a text book case of character assassination of a woman who has chosen to enter public life. She claimed no other entity except the BJP and Gambhir "stood to gain from spreading such virulently hateful propaganda against a woman". "Ever since I took the plunge into active politics, I faced a fair amount of attacks and criticism from political rivals and I had learnt to take it with a pinch of salt. "However, earlier this week, a most disturbing pamphlet was brought to my notice by our well-wishers who received the pamphlet by post, and other means such as newspaper inserts and distribution in parks," she said in the letter to the DCW.

She said the contents of the pamphlet have been attached to this complaint. "The contents of this complaint cannot be reproduced by me because they're a combination of communal, misogynistic, casteist slurs and falsehoods against me, the elected Chief Minister and Deputy Chief Minister of Delhi," she said. "There can be no doubt about the fact that the BJP and Gautam Gambhir are directly responsible for this as there is no other entity that stood to gain from spreading such virulently hateful propaganda against a woman. This is a text book case of character assassination of a woman who has chosen to enter public life," she said in the letter.

Atishi said she is extremely pained that she has become the latest target of the regressive mindset that does not believe women can be equal citizens and have equal opportunity. "I am writing to you to seek your urgent intervention in the matter in order to ensure that there is a thorough and independent investigation into the matter by all agencies and that this act will not go unpunished. I urge you to assist me in this fight against those who have chosen to use sick and misogynistic tactics in this election," she added.

Gambhir, in a series of tweets, said he is "ashamed" to have Arvind Kejriwal as chief minister and he would withdraw his candidature if the charge against him is proved. "You can't tarnish someone's image without proof. I have never given a negative statement against any opposition candidate in my election campaigning," he said in a press statement.

Gambhir on Friday said he will "hang" himself in public if the Aam Aadmi Party can prove that he has any link to the derogatory pamphlet. However, support poured in for Atishi from various quarters, with Samajwadi Party chief Akhilesh Yadav saying the pamphlet is a "new, distressing and disturbing low".

"The BJP needs to realise that it's better to lose with dignity than to lose all dignity," he said in a tweet.

Gujarat MLA Jignesh Mevani, who has been campaigning for Atishi, said the pamphlet is "bigotry" and "hateful to the core". Targeting the BJP and Gambhir, he tweeted, "Even if the party and candidates like him don't officially peddle or endorse it, their supporters online surely do. They tell me in comments to go clean gutters, while such progressive women face misogynist, casteist, communal abuses."

Actress Swara Bhasker said people should give a befitting reply in the upcoming polls to those who made Atishi cry. "East Delhi, you should exact revenge of the tears brought in the eyes of Delhi's daughter by voting for her. People who do not respect women, what respect would they show to their daughters," she said in a tweet. Atishi also found support from Twitter users who lauded the Oxford graduate for her courage.