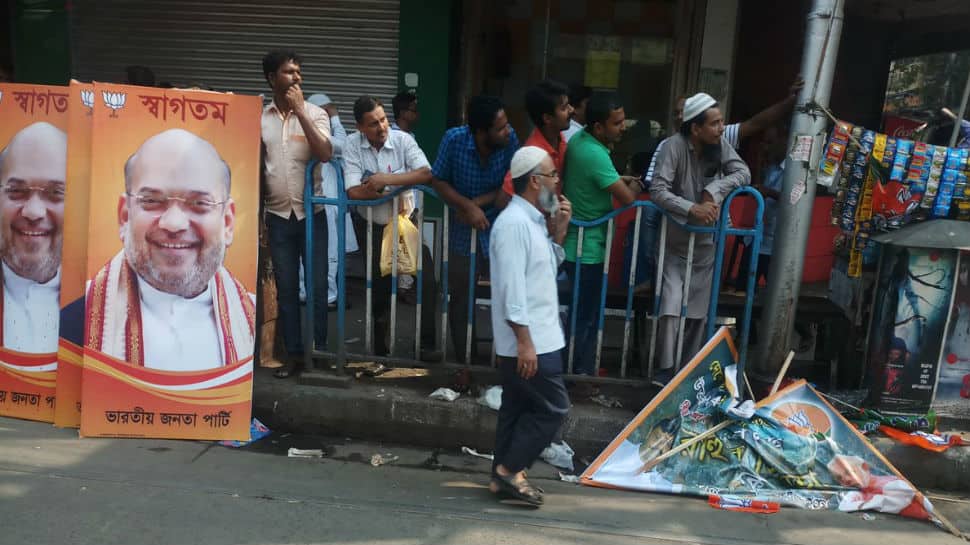 This photo was tweeted by Subrato Chattopadhyay, State General Secretary Organisation of BJP.
Share:
Written By:

Kolkata: The battle between the Bharatiya Janata Party and Trinamool Congress reached a crescendo in the capital city of West Bengal when posters of BJP were removed on Tuesday from the route of Amit Shah's roadshow.

The BJP posters of Prime Minister Narendra Modi and party president Amit Shah had been placed at different points of Tuesday's roadshow but was removed just hours before its start. BJP has alleged that these were removed by TMC party workers. "Mamata ji's goons and police removed all the posters and flags. They escaped soon after we reached here," Kailash Vijayvargiya, BJP national secretary, told news agency ANI. Meanwhile, BJP workers protested vociferously and chanted anti-Mamata Banerjee slogans. Many of the BJP workers have also alleged that the State Election Commission is biased and has been favouring TMC.

Amit Shah was scheduled to lead a BJP rally from Sahid Minar Maidaan but Kolkata Police denied permission stating that the BJP had tried to set up a stage here. As a result, the rally will now begin from Dharmatala and end at the house of Swami Vivekananda at Simla Street. The roadshow will reportedly also feature tableau from 20 states and have cultural events.

The roadshow is expected to be a show of strength by BJP, a party that has been engaged in an intense battle with TMC in the ongoing Lok Sabha election 2019. While the leaders of the two parties have traded accusations galore, there have also been personal attacks from Mamata against PM Modi. She maintains that the BJP won't be able to gain a foothold in the state although BJP has said that people here would rebel against TMC's misrule and give their support to the saffron party.

West Bengal has also witnessed poll-related violence in every phase of voting in Lok Sabha election 2019 so far. This had prompted Election Commission of India to replace state police with central forces in polling booths ahead of voting in the sixth phase. BJP alleged that the state police was under TMC's influence while TMC went on to say that the central forces were trying to influence voters. With voting in nine seats here scheduled for the final phase - May 19, both parties have stepped up their efforts to reach out to voters with Amit Shah - who has campaigned elsewhere in West Bengal, now focusing on Kolkata.