Pulwama and Shopian, which form part of South Kashmir, have seen maximum number of encounters last year as well as this year. 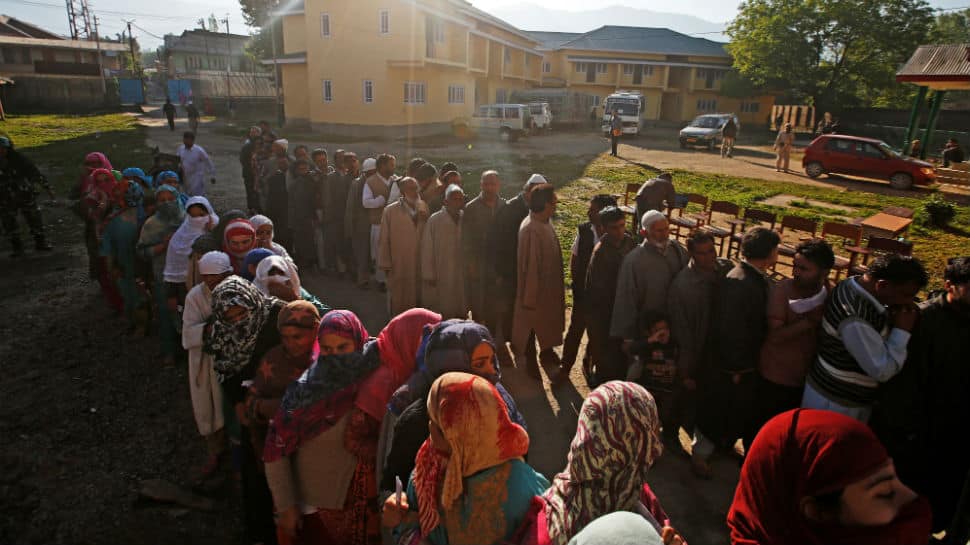 Shopian/Pulwama: Deserted roads leading to polling booths and overbearing presence of security forces were dominant scenes on Monday in Pulwama and Shopian districts of Jammu and Kashmir where voting ended for Anantnag Lok Sabha seat with only three per cent of the electorate exercising their franchise and over 25 per cent polling stations not recording any vote.

At some places people were seen in groups discussing the security situation and the elections and they were quite vocal about their non-participation in the political process.

Pulwama and Shopian, which form part of South Kashmir, have seen maximum number of encounters last year as well as this year. The number of terrorists killed in encounters in 2018 was above 80 and it stands at 40 as of now this year.

Officials at several polling stations were idling around, while security forces maintained a vigil against possible disruption by miscreants or an attack by terrorists, who could have surprised in view of thick vegetation and apple trees dotting the area.

Not a single vote was cast in 320 of the 1,250 polling booths in the two districts, they said.

Giving details, they said that Pulwama recorded a polling percentage of 0.8 per cent as only 652 out of 84,775 people cast their ballots. In neighbouring Rajpora assembly seat, 1.6 per cent polling was recorded at the end of the day.

Tral, which has also been witness to numerous encounters, accounted for 1.1 per cent polling.

Moderate polling could be seen at some polling stations in Pampore Assembly segment, the hometown of National Conference candidate and former High Court judge Hasnain Masoodi. This area recorded a polling percentage of 5.1 per cent.

In neighbouring Shopian district, 4.3 per cent votes were polled and at adjacent Wachi 2.5 per cent was recorded.

The polling for Anantnag Lok Sabha seat is being held over three legs in view of security threats and the election authorities have clubbed many polling stations at one location to ensure minimal dispersion of security forces in Shopian and Pulwama districts.

Polling for Anantnag constituency ended at 4 pm, two hours before the scheduled ending for other constituencies and the final count was three per cent which included the migrant votes in the six Assembly segments spread across the two districts, the officials said.

Main thoroughfares crisscrossing through Pulwama and Shopian districts were deserted with only security forces vehicles and mediapersons moving around as they discharged their duties.

However, 15 votes were polled from Gundibagh, a village that hit the international headlines after one of its resident Adil Dar became a suicide bomber for Jaish-e-Mohammed terror group and triggered an explosive-laden car near a CRPF convoy killing 40 personnel. There are 350 votes in this village.

The threat perception to poll process in these districts was not unfounded as terrorist lobbed a locally assembled grenade at a polling station but there was no damage to life or property in the attack.

A police official said the explosive was a "socket grenade", a crude bomb manufactured locally with explosive material fitted in a pipe.

Incidents of pelting of stones by miscreants were reported from many places in the twin districts. Shattered pieces of windscreens could be seen at some places, highlighting the dangers of moving between places in the poll-bound areas.

Pulwama and Shopian districts have witnessed low key campaigning both due to security reasons and general disinterest among people in the elections.

No wall, street or building is festooned with colourful flags and banners of the parties.

Security forces working to ensure smooth conduct of the polls have cracked the whip on trouble-mongers.

While there are no official figures, a rough estimate is that 400 youths have been picked up and lodged in jails as a precautionary measure.

Pulwama, known as the "Anand (delight) of Kashmir" for its congenial climate, innumerable springs and waterfalls, hogged the headlines when a suicide bomber rammed his car into a CRPF convoy on February 14, killing 40 paramilitary forces.

Since then the campaign for 2019 Lok Sabha polls has revolved around Pulwama and terrorism with parties making nationalism a key poll issue.

The elections to Anantnag parliamentary seat was divided into three phases. Earlier Anantnag voted on April 23 in which 12.8 per cent votes were cast. This was followed by the second phase in Kulgam on April 29 which recorded around 10 per cent voting.