EC bans Yogi Adityanath from campaigning for 72 hours, Mayawati for 48 over MCC violation

The ban starting from 6 am Tuesday has been imposed on both the leaders for violating Model Code of Conduct (MCC) by making objectionable statements in their speeches, the EC said in a press release. 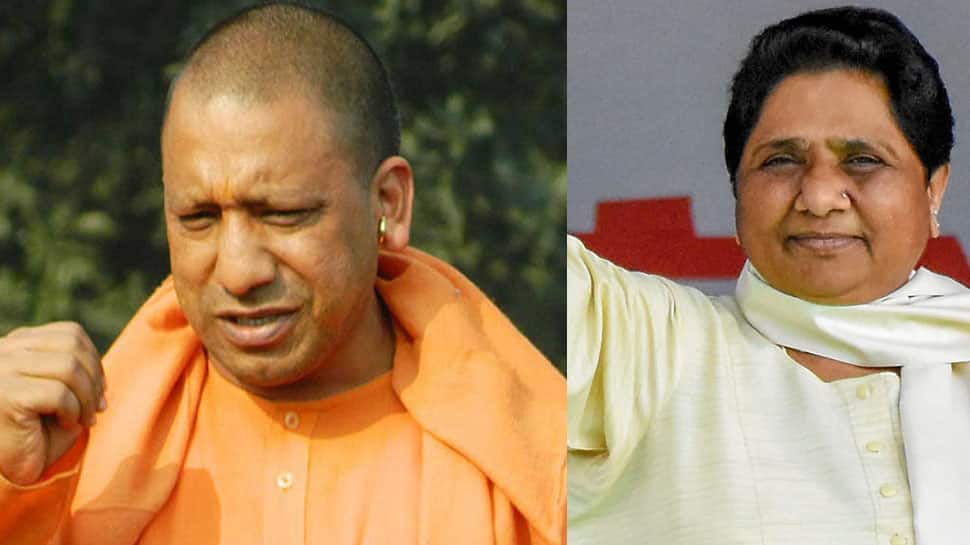 Taking strict action against Uttar Pradesh Chief Minister Yogi Adityanath and BSP chief Mayawati for violating the Model Code of Conduct (MCC) by making objectionable statements in their speeches, the Election Commission on Tuesday banned both the leads from election campaigning for 72 hours and 48 hours respectively.

The poll panel swung into action hours after the Supreme Court expressed its displeasure over its decision to not take action against Yogi Adityanath for his statement on Ali and Bajrang Bali and Mayawati for appealing Muslims to vote for her party.

The ban starting from 6 am Tuesday has been imposed on both the leaders for violating the MCC, the EC said in a press release. 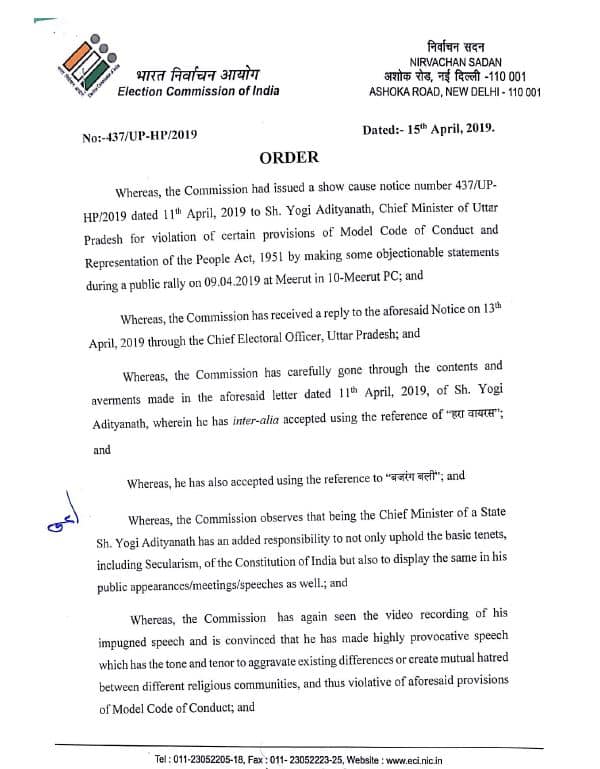 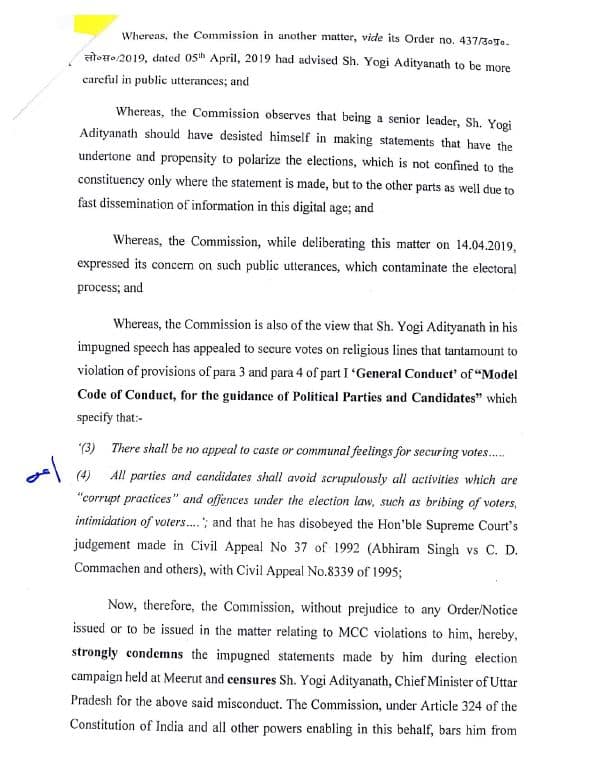 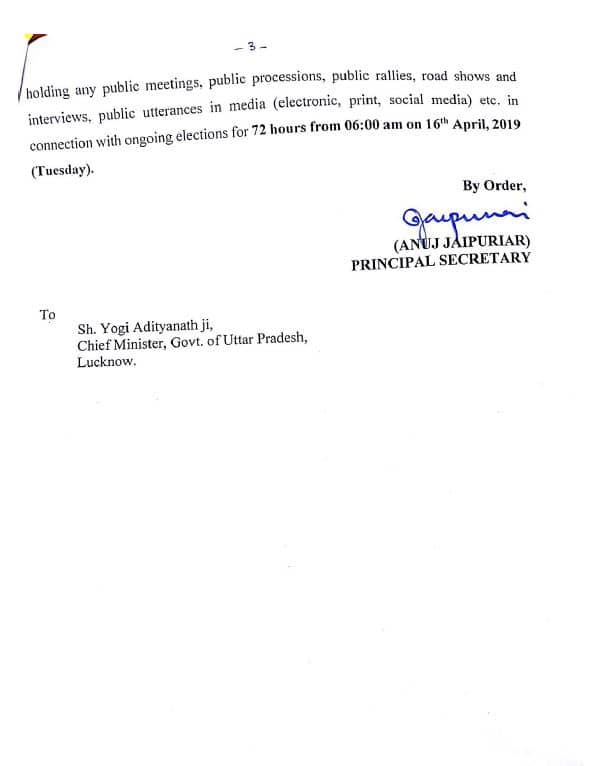 Here's the copy of EC's order for BSP supremo Mayawati 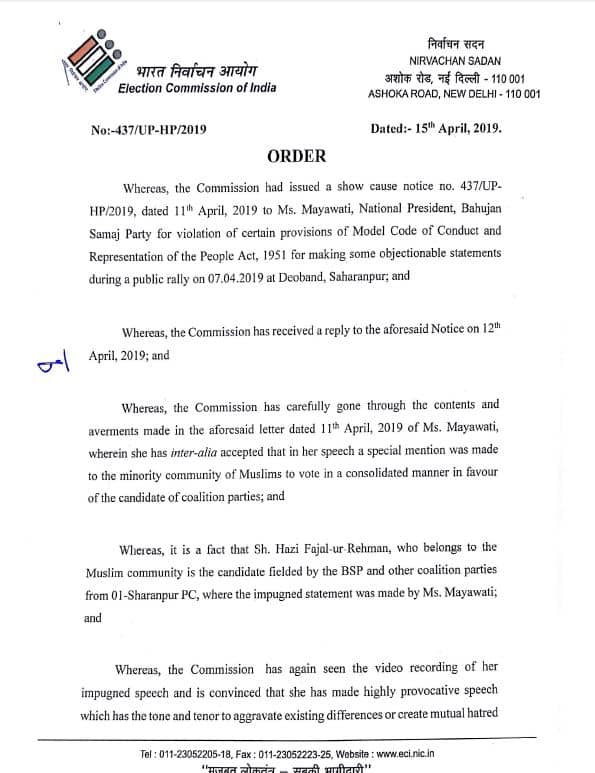 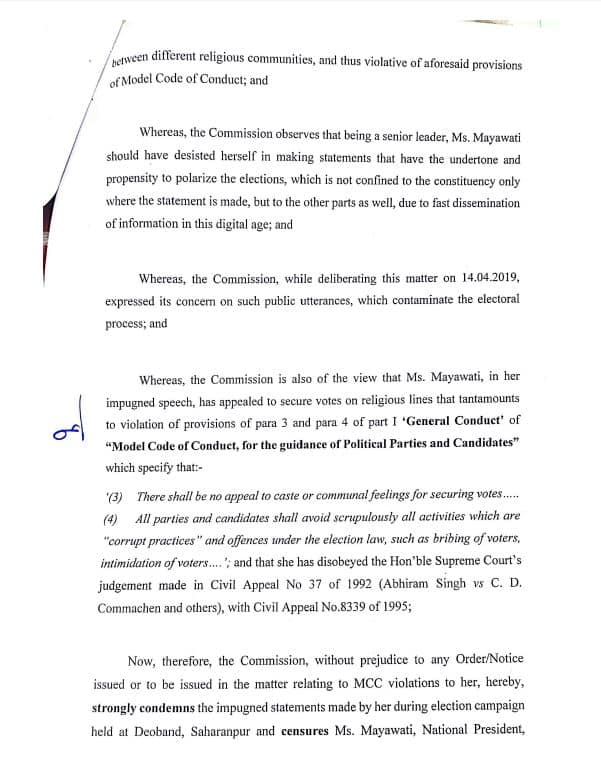 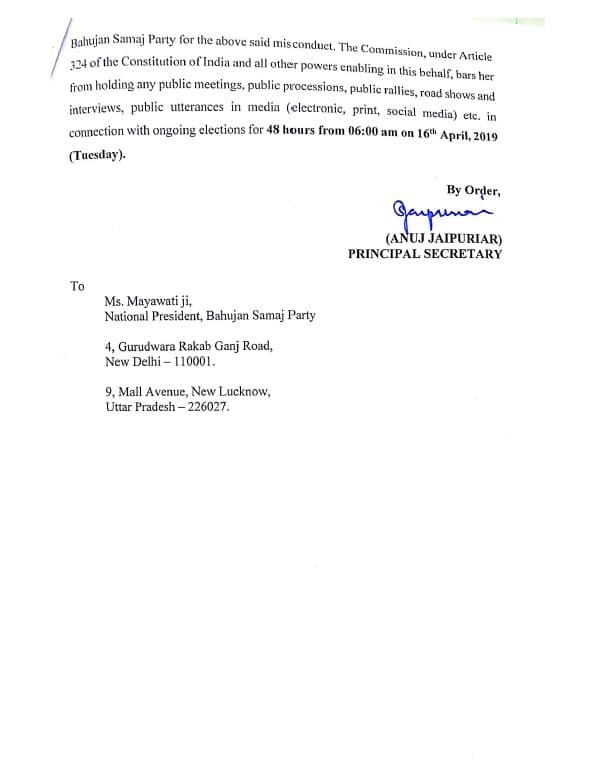 Earlier in the day, the apex court had also expressed displeasure with the poll panel 'having limited power to act against leaders like Mayawati and Yogi Adityanath making statements along religious lines and violating model code of conduct during elections'. An SC bench led by Chief Justice Ranjan Gogoi had ordered the representative of EC to appear before it on Tuesday.

The strong observation was made by the top court while hearing a PIL seeking strict action against political parties if their leaders and spokespersons deliver speeches and make remarks along religion and caste lines.

"You can't sleep over such issues. You have done nothing about such statements. You must act when these statements are issued," the SC had said.

Mayawati was scheduled to address a joint rally with Samajwadi Party chief Akhilesh Yadav in Agra on Tuesday. However, after the EC's ban she will not be able to attend the rally. On the other hand, Yogi Adityanath is a star campaigner of the BJP only after Prime Minister Narendra Modi and BJP president Amit Shah. By taking the strict action, the EC has sent a strong message to all political parties that they should remain within their Constitutional rights and follow the MCC in its letter and spirit.

On Thursday, show cause notices were issued by the EC to Mayawati and UP CM Yogi Adityanath over their speeches violating Model Code of Conduct (MCC).

The EC issued the notice to Mayawati over her speech in Deoband appealing to Muslims not to vote for the Congress, saying that prima facie the BSP chief had violated the model code of conduct.

Yogi Adityanath was issued show cause notice by the EC for his "Ali" and "Bajrang Bali" remarks which the Uttar Pradesh CM had made while addressing a rally in Meerut. Yogi Adityanath was found prima facie guilty of violating the MCC and the EC had sought a response from him within 24 hours.