Claiming that stories that no other senior leader apart from Modi and Shah are allowed to speak their mind are "fabricated", Naqvi said Modi has been the biggest victim of "political intolerance" and a "few incidents by fringe elements" cannot be branded as intolerance against minorities. 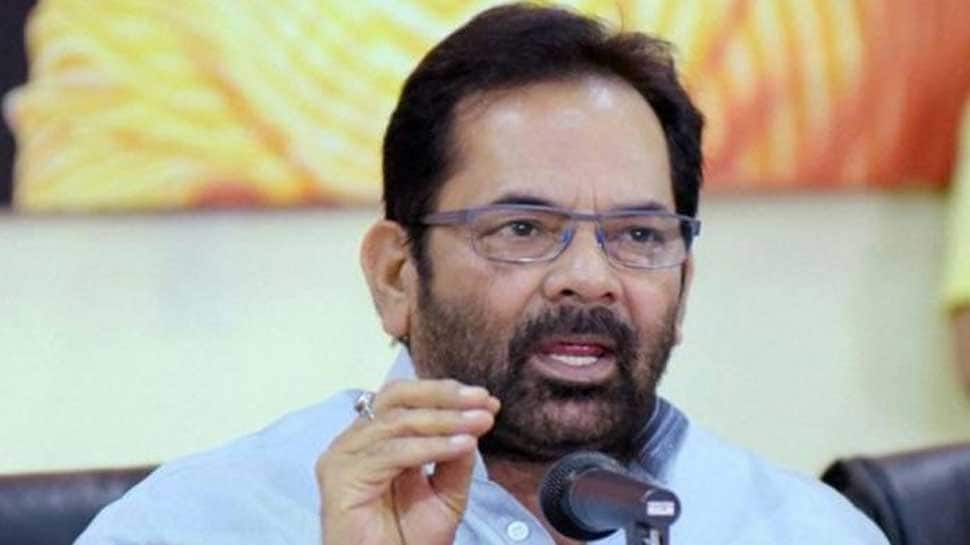 Kolkata: Those not aware of the struggles of Prime Minister Narendra Modi and BJP president Amit Shah have tried to create "fabricated" stories that the cadre-based party has become an individual-centric organisation, Union minister Mukhtar Abbas Naqvi said.

Denying claims that a sense of fear prevails in the BJP, he said stories of no other senior leader apart from Modi and Shah are allowed to speak their mind are "fabricated".
Modi has been the biggest victim of "political intolerance" and a "few incidents by fringe elements" cannot be branded as intolerance against minorities, the senior BJP leader and Union minister for minority affairs told PTI in an interview.

"Narendra Modi and Shah are both ground-level workers. They started their political journey as village and local level (mandal) workers. "Those who don't know Amit Shah and Modiji (and their struggles) make such comments. They create such false and fabricated stories," Naqvi said when asked whether a cadre-based party like the BJP has turned into a party of Modi and Shah.

When asked if a sense of fear prevails in the BJP as no other leader apart from Modi and Shah are allowed to speak their mind, Naqvi said these are "fabricated stories" created by those who don't know the prime minister and the party chief. Exuding confidence that the BJP will win more seats than 2014, Naqvi said Modi due to his good governance in the last five years has become "a very credible brand of development, good governance and stability".

"The last (general) election took place in the name of Narendra Modi, this time election is taking place on the basis of the work done by Narendra Modi. For the sake of betterment of the country, we need Narendra Modi's government," he said. Refuting claims that minorities are living under fear, threat and intimidation, the Union minister said that "a wrong perception was deliberately created".

He claimed that earlier, during Congress's rule, every 15 days there used to be a terrorist attack in India and apart from innocents being killed in these attacks, a large number of Muslim youths used to get arrested and branded as terrorists in the aftermath of these incidents. "Such incidents have never taken place in the last five years (of the Modi government)," the BJP leader said.

On incidents of lynching, Naqvi said though there has been development without discrimination, "some fringe and criminal elements have tried to disrupt the agenda of development". "Under Modiji's rule we have not allowed such destructive agendas to get prominence, and those involved in such criminal activity, we had taken action against them," he said.

No government has ever faced so much of negativity that Modi and the present government had to face, Naqvi said, adding that despite negative campaigns, the Modi government has performed, reformed and transformed the nation. "In every democratic system agreement and disagreements are both sides of the same coin. This perception of intolerance against us is completely wrong," he said.

Last month veteran BJP leader L K Advani in a blog had said his party has never regarded those who disagreed with it politically as "anti-national" or "enemies" but only as adversaries.  His comments came at a time when the BJP under Prime Minister Modi and Shah have made the issue of national security a key plank for the general elections and have often accused its political rivals of speaking the language of India's enemies like Pakistan.

Listing out achievements of the BJP government, Naqvi said the present dispensation has followed the policy of "development for all" and has been able to control inflation, price rise, corruption. It has brought back the economy on track, he said.

Commenting on the violence during the Lok Sabha polls in West Bengal, he said the state administration is not supporting the Election Commission in conducting free and fair polls. "Goons supported by the TMC are influencing elections in Bengal. Despite daylight killings of opposition workers, not a single culprit is being arrested.The TMC is desperate as it has sensed defeat," he said.

In a first in the country, campaigning for nine Lok Sabha seats in Bengal going to polls in the last phase came to an end at 10 pm Thursday, 20 hours before the scheduled time, in the wake of violence between BJP and TMC workers in Kolkata during Shah's roadshow on May 14.