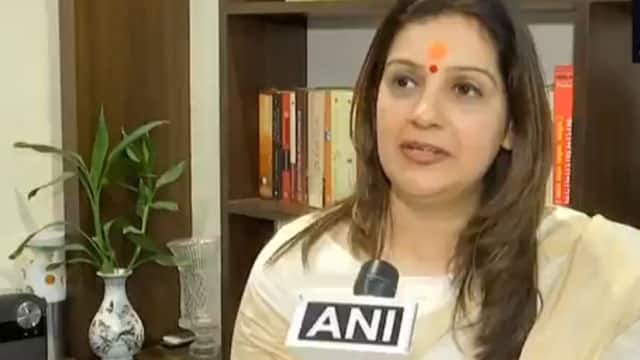 MUMBAI: Hours after she joined Shiv Sena, former Congress spokesperson Priyanka Chaturvedi on Friday said that she will continue to highlight the failures and shortcomings of the NDA government with her songs despite her party being an ally of the ruling BJP at the centre.

Speaking to ANI, Priyanka Chaturvedi said, ''If you see Shiv Sena also, in past 5 years, they've never hesitated from speaking if the government did something wrong.''

The former Congress spokesperson made these remarks when she was asked to comment if she will continue to mock Union Minister Smriti Irani even after joining Shiv Sena.

It may be recalled that Priyanka had recently sung a song mocking Irani - the former Union HRD minister - over her controversial educational record.

''Aur gaana main gaate rahungi,'' she said in her reply.

Priyanka Chaturvedi when asked on her recent song on Smriti Irani's degree, that will she continue it after joining Shiv Sena, a BJP's ally: If you see Shiv Sena also, in past 5 yrs they've never hesitated from speaking if Govt did something wrong. 'Aur gaana main gaate rahungi' pic.twitter.com/7Bx6nZJd39

Earlier, this morning, in a big jolt to the Congress party, Priyanka formally joined the Shiv Sena in the presence of party chief Uddhav Thackeray in Mumbai.

Thackeray welcomed her at a hurriedly convened media conference and said he was "happy that she had decided to join the Shiv Sena".

His son Aditya Thackeray presented her a bouquet and tied her a thread symbolizing `Shiv Bandhan' with several senior party leaders in attendance.

Soon afterwards, Chaturvedi, 39, launched a scathing attack on the Congress, accusing it of not supporting her when she was treated badly by some Congress activists.

"I have served the party (Congress) for 10 years in a selfless manner without asking for anything in return. But the party chose to ignore my complaints though the matter was taken up at the topmost level," Chaturvedi said, addressing the media in Hindi.

Chaturvedi said she had expressed her "pain" to the Congress leadership about the reinstatement of colleagues who misbehaved with her.

Though Chaturvedi admitted she was a bit disappointed at being overlooked for the Mathura Lok Sabha seat candidature, she insisted that the primary reason for quitting the Congress was the inaction against some activists who had misbehaved with her in the past.

Among her immediate priorities, she listed championing the cause of empowering women in politics and other fields besides helping "strengthen and build up Shiv Sena at the national level".

Reacting to her exit, Congress national spokesperson Randeep Surjewala said, ''Every time a party member leaves, it's a matter of pain for us. People look for career progression. We wish all of them well, including Priyanka Chaturvedi...I must frankly and on record concerned, yes, it's a reflection on my leadership.''

During the press briefing, Mumbai-born and educated Chaturvedi described the city as "my janmabhoomi'' and ''karmabhoomi'', and the 53-year-old Shiv Sena as the `roar` of Mumbai, Maharashtra and rest of the country".

On his part, Thackeray said the party would soon identify her responsibilities in Shiv Sena keeping in view her background and experiences and inform the media.

Chaturvedi has been a prominent face of the Congress, articulating its viewpoint at press conferences and as a TV panelist.

In her letter to Congress president Rahul Gandhi on Thursday which became public on Friday, Chaturvedi said that in the last few weeks certain things had convinced her that her services were not valued in the party any more.

She said it saddened her that despite the safety, dignity and empowerment of women being promoted by the Congress, "the same is not reflected in the action of some of the members of the party".

On Wednesday, Chaturvedi hit out at the Congress for reinstating members who had been suspended recently for misbehaving with her at a press conference in Mathura, saying "those who threatened her within the party got away with not even a rap".