Shatrughan Sinha, who has been criticising the Modi government for long, said it was "painful" for him to leave the BJP with which he has had such a long association 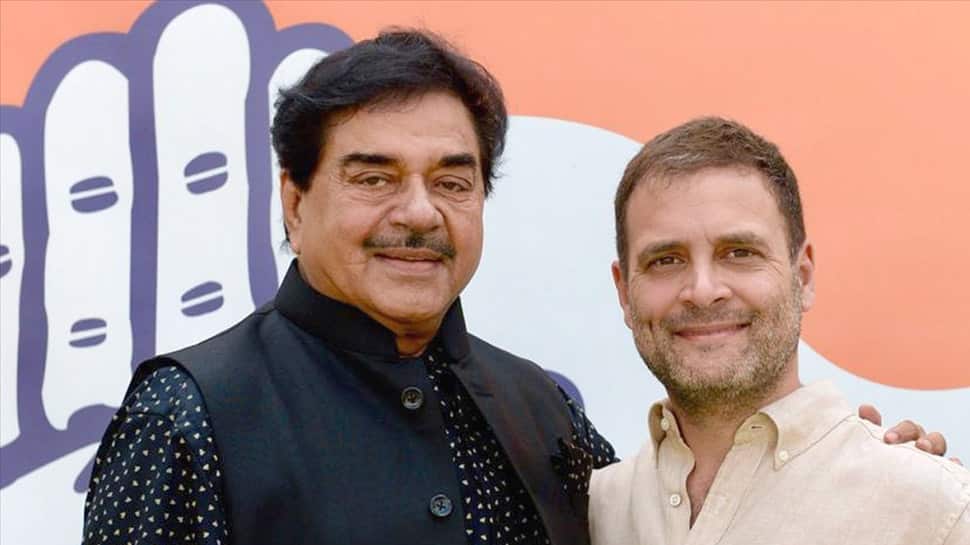 New Delhi: Actor-politician Shatrughan Sinha, who has announced that he is quitting the BJP, on Sunday said he decided to go with the Congress as it was a national party in the "true sense" and family friend Lalu Prasad also advised him to do so.

He said leaders such as Trinamool Congress chief Mamata Banerjee, Samajwadi Party supremo Akhilesh Yadav and Aam Aadmi Party (AAP) national convener Arvind Kejriwal, among others, wanted him to join their respective parties, but he had made it clear that whatever be the situation, the constituency he would be contesting in the Lok Sabha polls would be Patna Sahib.

The actor-turned-politician, who has been criticising the Modi government for long, said it was "painful" for him to leave the BJP with which he has had such a long association, but was disturbed at the treatment meted out by the party to its stalwarts such as L K Advani, Murli Manohar Joshi, Arun Shourie and Yashwant Sinha.

The BJP has not fielded party veterans Advani and Joshi in the Lok Sabha polls.

In an exclusive interview to PTI, Sinha said he had won from Patna Sahib in 2014 on his own merit, without support from the BJP and feels that this time he could break his "previous records in terms of victory".

He slammed the BJP's leadership of Prime Minister Narendra Modi and party chief Amit Shah saying earlier there was "lokshahi" (democracy) and now there is "tanashahi" (dictatorship) in the party.

"There used to be collective decision during Atal (Bihari Vajpayee) ji's time. There was democracy in the true sense. But now, there is the case of one-man show and two-man army," said the 73-year-old leader, who is in Muscat, where he is being honoured as a cinematic legend.

Asked why he decided to go with the Congress, Sinha said there were several reasons such as it is the grand old party which has had great leaders like Mahatma Gandhi, Vallabhbhai Patel, Jawaharlal Nehru, and those of the Nehru-Gandhi family.

The party also has a great contribution to the country's freedom movement, the sitting MP from Patna Sahib said, adding another reason was that it is a national party in "true sense".

"Our family friend (RJD chief) Lalu Prasad also suggested 'you go there (to the Congress). We are there with you and will be together politically also'. It was done with his (Lalu Prasad's) permission and in agreement with him," said Sinha, who won the Patna Sahib seat back to back in 2009 and 2014 parliamentary polls.

He said an important factor is that the Patna Sahib seat has gone to the Congress quota in the mahagathbandhan (grand alliance) seat sharing and he had said that whatever be the situation, the constituency for him to fight the polls would be the same.

"Many people like (TMC chief) Mamata Banerjee, (SP president) Akhilesh Yadav, and (Delhi Chief Minister) Arvind Kejriwal among others, wanted me to be in their party. But I had to come to this place because I had said that whatever be the situation, the location will be the same," Sinha said, adding that the Congress was a great party.

On claims by BJP leaders that he got votes in Patna due to the party, the former Union minister said, "I would like to say that in the last election it was not just Modi 'leher' (wave) but Modi 'qahar' (destruction) on certain seats like we saw Shahnawaz Hussain losing from Bhagalpur. Arun Jaitley had a humiliating defeat."

"I did not even call my own daughter Sonakshi Sinha so that people don't get to say things. I won on merit, on principles, without anybody's support or help. They (the BJP) did not give me the help they were giving to other candidates, they did not give me any help," he alleged.

"Despite the Modi leher or qahar in the entire country, by the grace of the people of Patna, in my victory, I had the highest vote share percentage in the country," Sinha said.

Asked how he sees the impending clash with senior BJP leader Ravi Shankar Prasad on the Patna Sahib seat, Sinha said the Union minister is like a family friend and he has respect for him.

Asserting that he doesn't want to comment on personalities as he has only spoken about issues, Sinha said, "For Ravi Shankar Prasad I can only convey my best wishes. After all, the people of Patna will decide. We will accept the verdict. I have a feeling that by the grace of God and with great support from the people, I could break my previous records also in terms of victory."

His remarks came after daughter Sonakshi Sinha on Friday said he should have "moved on" from BJP long back as he did not get the respect he deserved. Sonakshi said joining Congress is his choice and she believes the veteran actor will be able to do good work with the party.

Shatrughan Sinha also hailed Rahul Gandhi's leadership qualities, saying the Congress president is a man to be watched for his vision and dynamism.

"The way he has taken up issues boldly, he has proved himself and in one year as Congress president, he has won three states despite EVMs and many hurdles. He is the originator of the most popular slogan -- 'chowkidar chor hai'," Sinha said.

On whether Gandhi could be the next prime minister, he said it all depends on the blessings of the people the number of seats Congress gets.

"Rahul Gandhi has all the capabilities," Sinha added.