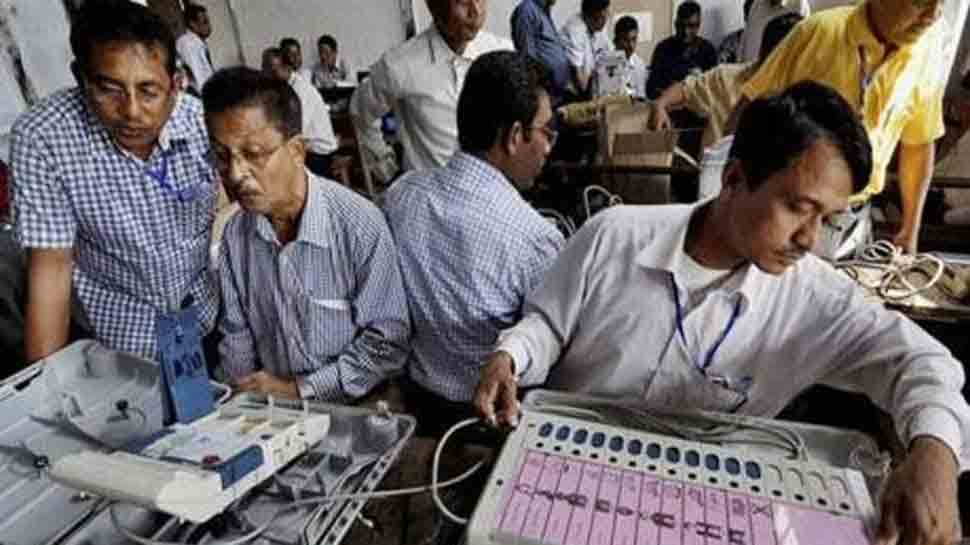 With less than a week left for the seventh and final phase of Lok Sabha election, political bigwigs campaigned extensively on Monday to woo the voters. Leaders from top parties have lined up several election rallies.

Voting for Phase 7  will be held on May 19 in 59 seats across eight states. These include 13 in Punjab and Uttar Pradesh, 9 in West Bengal, 8 seats in Bihar, Madhya Pradesh, 4 in Himachal Pradesh, 3 in Jharkhand and 1 in Chhattisgarh.

Thanks for joining us. Please do come again on Tuesday (May 14) for Lok Sabha live updates. Here are the updates from May 13:

# Taking a jibe at West Bengal CM Mamata Banerjee over the cancellation of one of his rallies in the state, BJP President Amit Shah said the state's voters have decided to send more than 23 BJP MPs to the Lok Sabha irrespective of whether the state government allows them to hold meetings.

# Rahul Gandhi's travel programme in Madhya Pradesh on May 14:

# Priyanka Gandhi Vadra's travel program for May 14 in Himachal Pradesh and Punjab:

# A polling agent was arrested for allegedly attempting to influence voters at a polling booth in the Faridabad parliamentary constituency during the sixth phase of voting for Lok Sabha polls on Sunday,  prompting the Election Commission to order repolling.

"A complaint of a violation of the secrecy of voting in polling station 88, Asawati in Prithla constituency of 10, Faridabad parliamentary constituency was reported yesterday. On enquiry by the Observer, the complaint was found to be true. Commission has therefore ordered a fresh poll at this polling station on May 19," the poll body said in a statement on Monday.

# Election Commission finds speech delivered by Congress leader Milind Deora on April 2nd violative of the Model Code of Conduct. The poll panel censured and warned him to be more careful in the future.

Election Commission: Speech delivered on 2nd April by Milind Deora, Congress found violative of the Model Code of Conduct (MCC). Commission censured and warned him to be more careful in the future. (file pic) pic.twitter.com/t7SISR7y7j

# PM Modi stepped up his attack on the Congress over the issue of 1984 anti-Sikh riots, saying Rahul Gandhi should be ashamed of himself rather than reprimanding Sam Pitroda for his remarks. Read full report

# PM Modi said he would fight for justice for the 1984 anti-Sikh riot victims and blamed the previous Congress governments in the Centre for not delivering justice in 35 long years.

# The Congress has expressed concern over the way electronic voting machines (EVMs) were transported to strongroom in Nand Nagari in the North East Delhi Lok Sabha constituency after voting on Sunday evening.

# The Congress has expressed concern over the way electronic voting machines (EVMs) were transported to strongroom in Nand Nagari in the North East Delhi Lok Sabha constituency after voting on Sunday evening.

#  Two Opposition MLAs are in touch with the BJP and are likely to vote in favour of the BJP-led coalition government in Goa, once the Assembly session is called, said state BJP president Vinay Tendulkar.

# Tamil Nadu Minister KT Rajendra Balaji: Kamal Haasan's tongue should be cut off for his remarks on Hindu terror. He made these remarks to gain votes of minorities. We can't blame entire community for act of one individual. EC should take action against the actor and ban his party.

Tamil Nadu Minister K.T. Rajendra Balaji: Kamal Haasan's tongue should be cut off for his remarks on Hindu terror. He made these remarks to gain votes of minorities. We can't blame entire community for act of 1 individual. EC should take action against the actor & ban his party. pic.twitter.com/2O3nypPOtu

# A Trinamool Congress (TMC) delegation, here on Monday, met Deputy Election Commissioner Sudeep Jain and sought action against the central forces for favouring a political party, as well as some Bharatiya Janata Party (BJP) candidates for creating confusion among voters.

# Hitting out at BJP president Amit Shah over his "Kangal Bangla" remark, TMC leader and Rajya Sabha member Derek O'Brien Monday called him a "low-life" who "insulted" the state.

# The Goa Congress` women`s wing here on Monday alleged that Atanasio `Babush Monserrate, the party candidate for the Panaji Assembly by-election, has been framed in a 2016 case of minor`s rape, and accused the BJP-led coalition government in the state of vindictive politics.

# A Trinamool Congress (TMC) delegation, here on Monday, met Deputy Election Commissioner Sudeep Jain and sought action against the central forces for favouring a political party, as well as some Bharatiya Janata Party (BJP) candidates for creating confusion among voters.

# Haryana Police unleashed a three-layer security cover to protect EVMs and VVPATs in all counting stations.

Behan Mayawati - She is firm on becoming a Prime Minister. Her governance, ethics and discourse stoops to an all-time low. Her personal attack today on the Prime Minister exposes her as unfit for public life.

# The Supreme Court on Monday dismissed a petition seeking to prepone polling hours from 7 a.m. to 5 a.m. for the remaining phases of the general election.

# Congress general secretary Priyanka Gandhi Vadra on Monday climbed a barricade to greet the public during a rally in Ratlam. Read full report

# PM Modi while addressing a rally at Himachal Pradesh's Solan, accused the previous Congress government of using defence deals as an automated teller machine (ATM) for the party.

# A man, who claimed to be a personal assistant to BJP`s West Bengal unit chief Dilip Ghosh, was arrested along with an accomplice after Rs 1 crore of unaccounted money was seized from them in Asansol station on Monday, Railway Police sources said.

# Congress president Rahul Gandhi said that those guilty of 1984 anti-Sikh riots should and will be punished while reiterating that Sam Pitroda's "Hua to Hua" remark on the tragic event was shameful. "Whatever he said about 1984 anti-Sikh riots is wrong. He should apologise to the nation for this. He should be ashamed of what he said," Rahul said. Read full report

# Defence Minister Nirmala Sitharaman on Mayawati's remark on PM Modi: Absolutely disappointing and shocking for her to speak so ill about PM Modi and his personal life and women in BJP. 'Behen' Mayawati please be assured we're all absolutely safe, secure and have good professional relationships in our party.

# BJP writes to Karnataka Chief Electoral Officer against Congress leader DK Shivakumar alleging that he has camped at Kundagola and has been distributing cash to the voters and leaders.

BJP writes to Karnataka Chief Electoral Officer against Congress leader DK Shivakumar alleging that he has camped at Kundagola & has been distributing cash to the voters and leaders pic.twitter.com/M0j93fIAGs

# SP-BSP workers clash with each other ahead of the joint rally of Mayawati-Akhilesh Yadav in Uttar Pradesh's Gazipur. The leaders are campaigning for their candidate Afzal Ansari, who is contesting from Gazipur Lok Sabha seat.

# Odisha CM Naveen Patnaik writes to PM Narendra Modi seeking assistance for construction of 'pucca' houses in the cyclone-hit districts of Odisha, today. The CM requested the sanction of 5 lakh houses under the Pradhan Mantri Awas Yojana-Gramin special houses in the 14 districts of the state that have been affected by the cyclone.

PM Modi was referring to the statement made by Congress' Sam Pitroda on the Anti-Sikh riots in the 1980s. 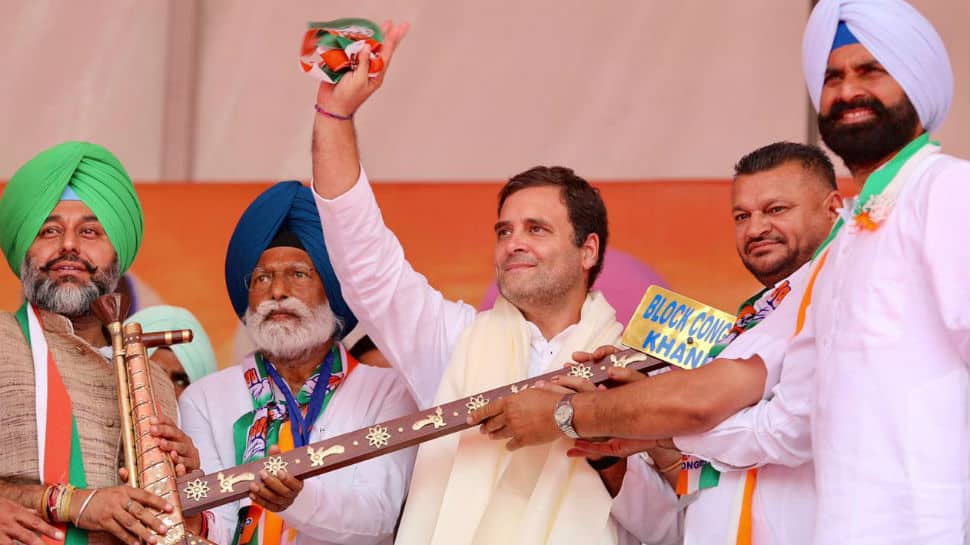 # PM Modi in Ratlam, Madhya Pradesh: The country is electing its representatives, even I went to Ahmedabad to cast my vote. President and Vice President of the country were standing in queues to cast their votes. But Digvijaya Singh didn't feel the need to cast his vote.

# BJP President Amit Shah in Joynagar, West Bengal: I was to visit 3 places today, but Mamata's ji's nephew is contesting from one of the seats so she is scared her nephew will lose, and that's why she cancelled the permission for our rally. pic.twitter.com/XVfbZPK0o0

# Rahul Gandhi says Sam Pitroda should apologise over his statement on anti-Sikh riots.

# The Supreme Court dismissed a plea seeking a direction to the Election Commission to advance poll timings to 5:30 am from 7 am for the seventh phase of Lok Sabha polls in view of searing heat and the month of Ramzan.

# Targeting the Kamal Nath government in MP over its alleged failure to implement its loan waiver promise in the state, PM Modi likened people to God and said, "The Congress cheated God."
He said the Congress had a problem saying 'Bharat Mata ki Jai', but was happy abusing him."

# PM Modi on Monday stepped up his attack on the Congress over its leader Sam Pitroda's 'hua to hua' (It happened, so what?) remark on the anti-Sikh riots in 1984. The remark reflects the arrogance of the opposition party, PM Modi said, addressing a rally at Ratlam in Madhya Pradesh. 'Hua to hua' are not just three words but reflect arrogance of the Congress, he said.

# Actor-turned-politician Kamal Haasan on Sunday sparked a fresh controversy by saying that independent India's first terrorist was a 'Hindu' and he was Mahatma Gandhi's assassin Nathuram Godse.

# Opposition leaders to meet in New Delhi on May 23 after Lok Sabha election result: Sources

# Security has been beefed up in Solan ahead of the PM Modi's rally. Seven hundred police personnel having been deployed.

# Elaborate security arrangements have been made for PM's rally in Bhatinda. Union Minister Harsimrat Kaur Badal is seeking re-election from Bathinda.