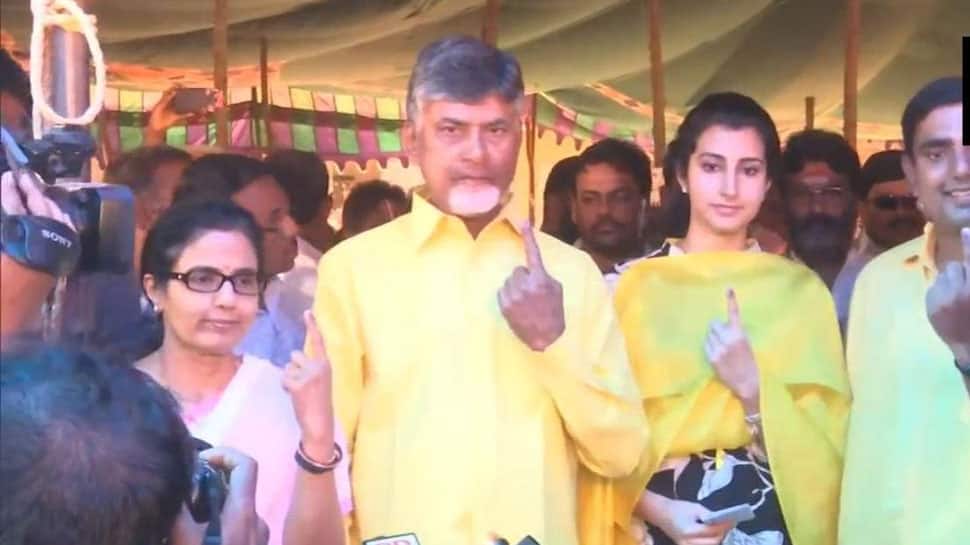 Naidu was accompanied by his wife N. Bhuvaneswari, son N. Lokesh and daughter-in-law N. Brahmani. The family voted at a polling booth in Undavalli in Mangalagiri Assembly constituency in Guntur district.

"It is the duty of every citizen to participate in the democratic process by casting his vote," said Naidu.

The RSS chief was also among the early ones to vote for the Lok Sabha polls in Maharashtra's Nagpur constituency, where Union minister Nitin Gadkari is the BJP's candidate.

Bhagwat along with Rashtriya Swayamsevak Sangh (RSS) general secretary Bhaiyyaji Joshi arrived at a polling booth at Bhauji Daftari School in Mahal area around 6.50 am.

"Voting is necessary and a sacred responsibility of all. Vote for national security, development and identity," he said. "Being quiet does not work, you have to say yes or no.”

“I'm very confident, people are looking for a change, vote without fear,” he said.

'Voting is our duty, everyone should vote' - Sarsanghchalak, Dr. Mohanji Bhagwat

Polling in all the Lok Sabha constituencies of Andhra Pradesh (25), Telangana (17), Uttarakhand (5), Meghalaya (2) and Arunachal Pradesh (2) besides lone seats in Mizoram, Tripura, Manipur, Nagaland, Sikkim, Andaman and Nicobar, and Lakshadweep is being held.
Eight seats in Uttar Pradesh, seven in Maharashtra, six in Bihar, five in Assam, four in Odisha, two each in Jammu and Kashmir and West Bengal and one seat in Chhattisgarh are also going to polls.