The high-pitched political campaign will continue across the country on Monday for the other four phases of Lok Sabha election 2019.

New Delhi: Sunday marked the last day of campaigning for the third phase of Lok Sabha election, voting for which is scheduled to take place on April 23 (Tuesday) for 117 constituencies including those in Gujarat, Kerala, West Bengal, Uttar Pradesh and 11 other states. However, the high-pitched political campaign will continue across the country on Monday for the other four phases. Political leaders from all the parties are sweating it out during the campaigns with an aim to woo the voters.

Today, Prime Minister Narendra Modi addressed two rallies each in Maharashtra and Rajasthan. Nashik and Nandurbar districts are the two places in Maharashtra where he addressed the election campaigns. In Rajasthan, he held rallies in Udaipur and Jodhpur.

Thank you for joining us. Do come back again on Tuesday (April 23) for live updates of Lok Sabha election 2019.

Here are all the live updates from April 22, Monday -

* One polling officer dead and five injured after the car they were travelling in met with an accident in Basantpur earlier today. The polling party was travelling with EVMs for the 3rd phase polling on Tuesday to polling booth no. 51 of Balrampur.

* Biju Janata Dal (BJD) candidate from Pipili assembly constituency, Pradeep Maharathy who was arrested by police in connection with an attack on election flying squad at his residential premises yesterday, sent to Jharapada Jail; Hearing on bail plea on April 24.

* Election Commission bars Punjab Minister Navjot Singh Sidhu from holding any public meeting, road show, public rally and interviews in media in connection with ongoing elections, for 72 hours from 10 AM on 23 April 2019.

* Meenakshi Lekhi has been nominated as BJP candidate from the New Delhi parliamentary constituency, reports ANI.

* Election Commission registers 2 FIRs against Union Minister and BJP candidate from Asansol Babul Supriyo for continuing to play campaign song despite the denial of permission by EC and for snatching the camera of an EC official who was video recording his rally.

* In a letter to Chief Electoral Officer, Bhubaneswar, BJD says, '' It's unfortunate that a state minister is arrested for 'obstructing flying squad on election duty from discharging their duties', while Union Minister Dharmendra Pradhan is allowed to go scot-free and no action is taken against him.

BJD in letter to Chief Electoral Officer, Bhubaneswar: It's unfortunate that a State Min is arrested for 'obstructing flying squad on election duty from discharging their duties', while Union Min Dharmendra Pradhan is allowed to go scot-free&no action is taken against him.#Odisha pic.twitter.com/TSJ60e4srz — ANI (@ANI) April 22, 2019

* BJD complains to EC over the arrest of its minister in Odisha.

* BJP's Manoj Sinha to file his nomination on April 25 from Gazipur. 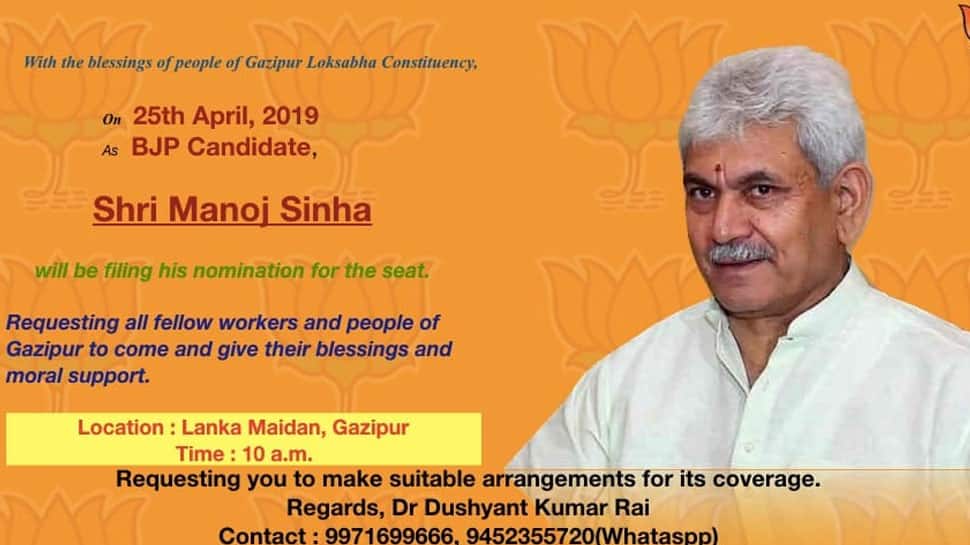 * I would like to challenge Narendra Modi to debate with me on corruption for 15 minutes. Dudh ka dudh, pani ka pani ho jayenga. I am telling you, Narendra Modi Ji won't be able to show his face before the nation.

Congress President Rahul Gandhi in Raebareli: I would like to challenge Narendra Modi to debate with me on corruption for 15 minutes. Dudh ka dudh, pani ka pani ho jayenga. I am telling you, Narendra Modi Ji won't be able to show his face before the nation. pic.twitter.com/Ic3K317fq2 — ANI UP (@ANINewsUP) April 22, 2019

*Democracy here is in danger due to TMC's hooliganism and anarchist ways. The youth here is unemployed and no one wants to invest here as whenever someone tries to invest, TMC goons harass them: UP CM Yogi Adityanath in Bangaon, West Bengal.

* Sadhvi Pragya has reached Bhopal and is expected to file her nomination shortly.

* First we will bring Citizenship Amendment Bill and will give citizenship to the persecuted minorities. Then, we will flush out the infiltrators. No refugee has to fear: Shri @AmitShah #BharatBoleNaMoNaMo pic.twitter.com/qiH6muh9qB

* Rahul said his statement was made in the "heat of political campaigning and it has been used and misused by political opponents."

* Sheila Dikshit, Former Delhi CM & Congress candidate from (NE) Delhi: I'll do my best to fulfill the responsibility given to me. I've contested from here earlier, I know the people here and they know me. We had started Metro from here, our reputation is of working for the people. pic.twitter.com/sdvuOYHess

* Sheila Dikshit will be up against BJP's Manoj Tiwari.

* Mamata Banerjee says this is not Bengal’s election but Delhi’s. Yes, that’s true but it's most important for the people of Bengal: Amit Shah

* No possibility of PM contesting from Bengal says Amit Shah

* The refugees who have come from Bangladesh, be it Hindus, Buddhists, Sikhs, Jains, or Christians, BJP has clearly signalled in its 'sankalp patra' that we will give: Amit Shah

* Bombs were hurled at vehicles of BJD and BJP MLA candidates in Odisha on Sunday.

*PM Modi is expected to hold a mega roadshow in Varanasi, the Lok Sabha constituency from where he will be contesting the election. PM Modi will file his nomination on April 26.

*Bharati Pawar and Union Minister of State for Defence Subhash Bhamre are the BJP candidates from Dindori and Nandurbar Lok Sabha seats, respectively.

*PM Modi will address the rally in Dindori first at 11 am followed by another one in Nandurbar and 1.30 pm.

*PM Modi will reach Udaipur from Maharashtra's Nandurbar and will then campaign in Jodhpur.