Sources said that Mayawati is expected to meet Sonia and Rahul before the announcement of the Lok Sabha election result. 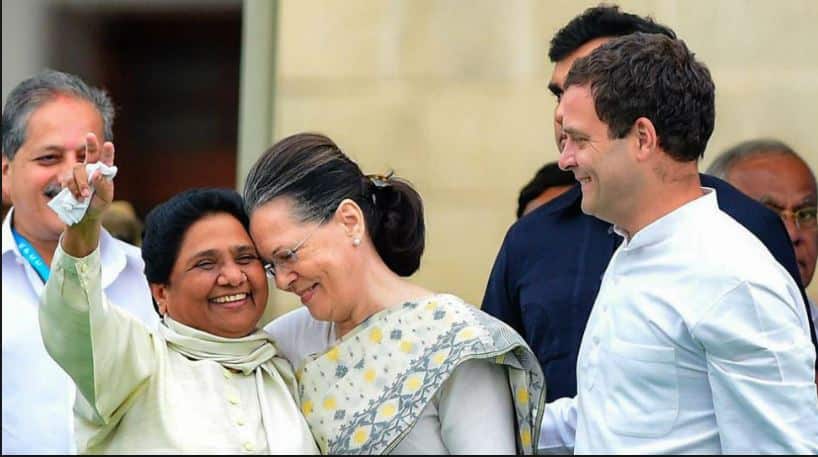 Sources said that Mayawati is expected to meet Sonia and Rahul before the announcement of the Lok Sabha election result. Mayawati's meeting with the Gandhis comes in the wake of Naidu's meeting with Sonia and Rahul on Sunday to discuss the post-poll scenarios and fine tune the strategies to cobble up an anti-BJP front. It may be recalled that Naidu had also met Mayawati and Samajwadi Party chief Akhilesh Yadav in Lucknow on Saturday.

It is learnt that Congress is also trying hard to bring all opposition parties on the same platform before the announcement of Lok Sabha election results. Congress managers are working overtime to fix a meeting between Sonia and Mayawati. Congress is hopeful that Mayawati will support the move to keep BJP out of power at the Centre even thougb she had slammed the Congress during campaigning for Lok Sabha election. But she surprised everyone by announcing that votes of the grand alliance in Uttar Pradesh would go to the Congress in Rae Barelli and Amethi - the Lok Sabha seats of Sonia and Rahul respectively.

The details of the discussions between Sonia and Naidu was not revealed to media but it is understood that the two leaders held talks over forming a front to stop BJP from coming to power at the Centre in case of a hung parliament. On Saturday, Naidu met leaders of several parties opposed, including NCP chief Sharad Pawar, CPI leader Sudhakar Reddy and Loktantrik Janata Dal leader Sharad Yadav in Delhi.

In a related development, Sonia Gandhi has already invited UPA leaders and some senior leaders have also got in touch in Odisha and Telangana chief ministers Naveen Pattnaik and K Chandrasekhar Rao respectively to attend a meeting on MAy 23. The UPA chairperson has also invited YSR Congress party chief Jaganmohan Reddy to attend the meeting.