Uma also took a dig at Priyanka Gandhi for not visiting the makeshift Ram Lalla shrine in Ayodhya and said that she is ill-informed about Ram Lalla and Ayodhya. 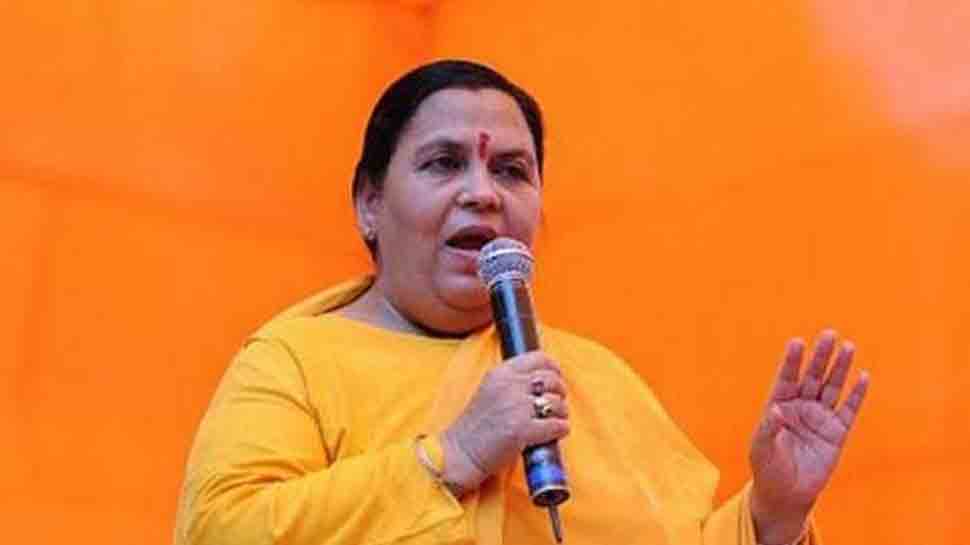 New Delhi: Union Drinking Water and Sanitation Minister Uma Bharti, who recently announced to not contest the upcoming Lok Sabha election, on Monday clarified that she will not be quitting politics.

"I became a minister to look after and clean Ganga. After working for two years, I wanted to leave and go between the people. I spoke to BJP chief Amit Shah and he respected my decision. I believe that one has to go to the banks of the River Ganga by leaving power. However, I will keep campaigning and will remain in politics till my last breath," she said.

Uma was speaking at the Zee News' India Ka DNA conclave and said that Ganga is about life and that she will continue to serve it till my last breadth and also continue to do politics too. "I have been addressing rallies. In BJP politics is not just contesting elections but it is mostly about serving the people. They work for the party and ensures its win in elections," she said.

Uma also took a dig at Priyanka Gandhi for not visiting the makeshift Ram Lalla shrine in Ayodhya and said that "the Congress' newly-appointed general secretary is ill-informed about Ram Lalla and Ayodhya. She must get her facts right. She is trying to divert attention from husband's misdeeds." Uma said that Muslims who stayed back in India after the partition believed that they will be safe here have and will have a bright future in the country. "The Muslims who decided to stay back in the country did not stay here because of Congress," she said.

Uma used the platform to appeal to all political parties and all sections of the society to help in building the Ram temple in Ayodhya.

She also expressed her hope of BJP winning the Lok Sabha election in Uttar Pradesh and said, "By-polls in Uttar Pradesh in the last two years has given us time to work harder and now the scenario has changed. BJP will win in Uttar Pradesh. We will be benefited from the Samajwadi Party-BSP alliance."

She added that Union Textile Minister, who contested the 2014 Lok Sabha election from Amethi, has worked very hard in the constituency and people will choose her as her leader. She also alleged that Rahul Gandhi, who is contesting from Amethi, is sure that he will lose the poll battle against Irani in Amethi and hence is contesting from a second seat, from Kerala's Wayanad besides Amethi. "Smriti Irani has worked very hard in Amethi. Earlier was no development in Amethi. But now, Smriti has worked very hard. Rahul Gandhi knows that he will lose the Amethi seat in upcoming elections and hence decided to field himself from another seat to save himself from embarrassment."

Uma also said that BJP's main opposition in 2019 is our own expectation. "Modi's biggest achievement has been that he ensures that every Indian is proud of his country. Rahul Gandhi's idea of employment is what Robert Vadra is. My idea of employment is about the people who have benefitted from the schemes of the government."

Calling Rahul and his family members 'Siberian migratory birds', Uma said that they seldom bothered to visit their constituencies. She also mocked the Gandhi scion for visiting homes of poor like 'tourists' and said that the Gandhi family is responsible for the poor plight of the country and its people. "But now, under Narendra Modi's regime, people proudly call themselves as Indian. This has happened for the first time in all these years," she said.

"There has been a lot of focus on women now. Earlier women were made ministers of portfolios like women and child welfare etc. Now a woman is the defence minister and is conducting strikes across the border," Uma said adding that "there is an anti-opposition wave in the country and not an anti-government wave."

"Congress leaders are living in Robert Vadraism. Robert Vadraism is about making money, enjoying a rich lifestyle, going to a gym," Uma said, as she concluded her address at the India Ka DNA conclave.