Rajasekharan recently resigned as governor of Mizoram to contest as the BJP's candidate from Thiruvananthapuram against Congress' Shashi Tharoor, a two-term sitting MP from the constituency. 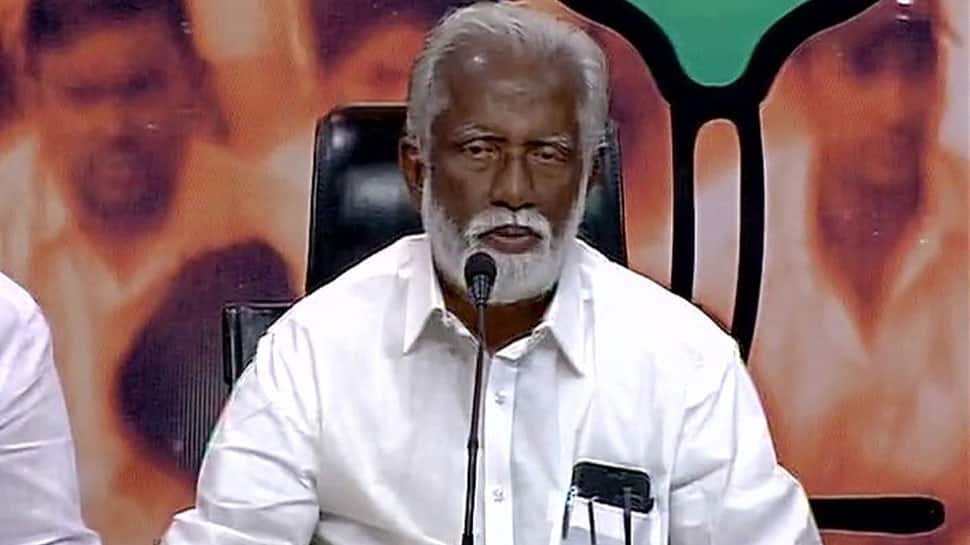 The controversy over the entry of women into the Sabarimala temple will help the BJP make inroads into Kerala, says the party's candidate K Rajasekharan while stressing that the disconnect between the people and the governments of the Congress and Left is an ever widening one.

Rajasekharan recently resigned as governor of Mizoram to contest as the BJP's candidate from Thiruvananthapuram against Congress' Shashi Tharoor, a two-term sitting MP from the constituency.

He said the people of Kerala have understood that BJP stands for the preservation of their culture and traditions and will never play with their sentiments.

"People from all religions in Kerala want to have the liberty to maintain their traditional customs. They want the liberty to observe, perform their customs and traditions, may it be temples, mosques or churches," Rajasekharan told PTI in an interview.

The 66-year-old, who began his career as a Rashtriya Swayamsevak Sangh (RSS) worker in the 1970s, said only the BJP can preserve the state's diversity.

"The Sabarimala issue will feature prominently during the saffron party's campaign in the state. The BJP is for preservation of diversity of such issues and we are highlighting the Sabarimala issue. People of Kerala know that we are for the protection of the state."

"The BJP will gain from the Sabarimala issue. There is a disconnect between Congress/Communist governments and the people over various issues, including the Sabarimala controversy," he added.

The temple had a centuries-old ban on the entry of women of menstruating age in the sanctum sanctorum.

The BJP voiced its protest against the Supreme Court verdict and asked the ruling Left Democratic Front (LDF) government in the state, to file a review petition against the apex court's decision.

Rajasekharan was president of the Kerala unit of the BJP between December 2015 and May 2018, following which he was appointed governor of the northeastern state of Mizoram.

It was under Rajasekharan's leadership that the BJP opened its account in Kerala, by winning the Nemom seat in the 2016 assembly polls.

The saffron party stood second in several other assembly constituencies where it struggled to bag even a couple of hundred votes, party workers pointed out.

Given his popularity in the state, BJP president Amit Shah asked him to resign as governor and contest the Lok Sabha elections from the Kerala capital, they said.

Rajasekharan said the people were getting fed up of the coalition fronts, such as the Communist Party of India (Marxist)-led LDF and the Congress-led United Democratic Front (UDF) which have been ruling the state since late the 1970s.

He claimed the people of the state wanted a government, that would implement the Centre's schemes and not just make hollow promises.

"Kerala's people have already seen the UDF and LDF. They could not retain the respect from the public. They could not attend to the problems of the general public," he said.

According to Rajasekharan, Kerala continues to suffer the most basic lack of infrastructure even 63 years after attaining statehood.

"The lack of adequate highways, railway connectivity and employment avenues in villages are only some of the problems," he said, adding that the disconnect between governments and the people has long been widening.

He also alleged that a sum of Rs 6,000 crore given to the Kerala government by the Centre for developmental work, has neither been utilised nor been accounted for.

"The Narendra Modi-led government gave nearly 6,000 crore in the last five years, but the state government did not implement any of the works, making it a major issue."

"The projects were mostly given for national highways and roads in rural areas. However, the state government can't even give proper records on where was it used," he said.

Talking about the Thiruvananthapuram parliamentary constituency, Rajasekharan said the existing parliamentarian was not even listening to the woes of people.

The Thiruvananthapuram representative does not even have time for his own people," he said without naming Tharoor.

"Under this Congress parliamentarian, even the city metro rail project has seen many hurdles. What is he for if he cannot stand for the welfare of the people and his constituency," he added.

"The last 10 years were honeymoon years for him (Tharoor) but this time he will be thrown out as the people have realised the need for a BJP candidate from Thiruvananthapuram," Rajasekharan signed off.