What PM Modi said in his interview with Zee News: Key points

PM Modi, in an exclusive interview with Zee News, said the BJP will sweep the ongoing Lok Sabha election and repeat the feat of 2014. 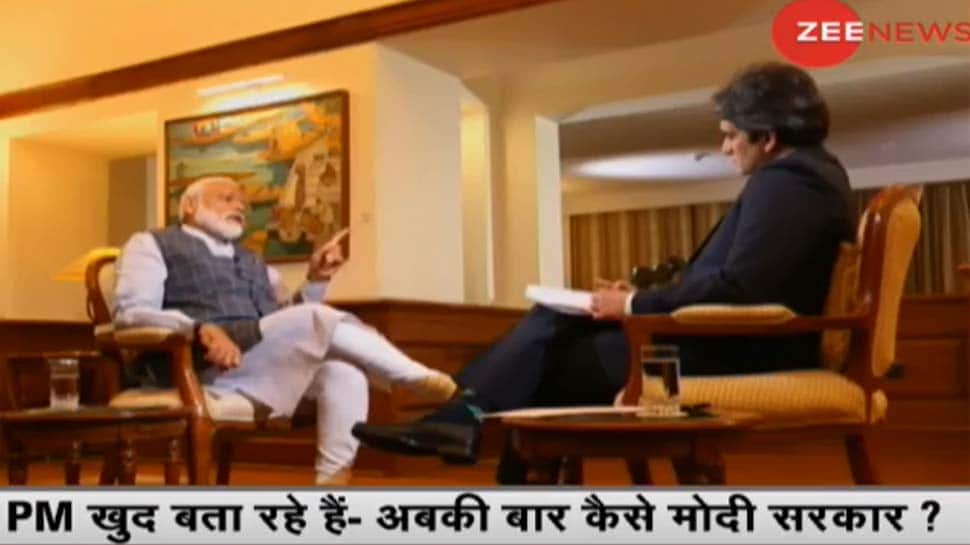 NEW DELHI: Prime Minister Narendra Modi, in an exclusive interview with Zee News Editor-in-Chief Sudhir Chaudhary on Thursday, said the Bharatiya Janata Party and its allies will get a bigger mandate than they won in 2014 and that the Opposition was daydreaming about ousting his government.

The Prime Minister also spoke on a variety of issues from fair play in politics to personal attacks and outlining his vision for the nation. Here are the top highlights of the interview:

When asked about NDA's poll prospects in view of the 'mahagathbandhan' and other political re-alignments in the country, the PM said: “I have travelled widely. I know the people of this country want a strong and decisive government…We have worked extensively with the state governments. I can feel the pulse of our countrymen."

People of India know who is capable of delivering a strong government, he said PM. “The opposition is day dreaming of ousting Modi. Their dream will be shattered on May 23."

When asked about how he will deal with a scenario in which the NDA falls short of the majority mark, the PM said, ''There is no plan A, B or C. The results will come on May 23, which will be followed by a meeting of NDA allies to elect its leader. After that, the President will invite us to form the government. I advise you and your channel to plan how to cover the oath ceremony.''

When asked about the performance of the BJP and its allies in states where they did not win many seats in 2014, the PM said, ''Based on the feedback from across the country, I think NDA's tally will only increase after the results."

The PM also quipped that the slogan "Aayega to Modi hi" is not a joke but a reality.

''It is like the players who protest in front of the umpire after getting out,'' the PM said.

"It hurts when people abuse me and use all those harsh words against me, but I am used to it now,” Modi said.

'"I have no problems with Mamata ji. But I cannot see the way West Bengal is currently being ruled and being ruined," he said. “It's okay if you don't treat me as your leader. But not treating me as the PM, how is this justified? Is it not an insult to the Constitution?"

PM Modi denied making any allegations against the late Congress Prime Minister but said he only raised the issues which rocked Rajiv Gandhi's government like the Bofors scandal, Bhopal gas tragedy and 1984 anti-Sikh riots.

While maintaining that it is important to uproot the evil of terrorism, the PM said the war is no solution for it.

On questions about the opposition demanding proof about the impact of Balakot airstrike, the PM said it is a pity that rather than praising the government for its bold steps, its rivals keep asking for evidence. '"Peace is not meant for the weak...Only the powerful and the capable succeed in establishing peace. It is important for India to be seen as a powerful nation. Otherwise, there will be no stability, no peace in this region,'' the PM said.