Responding to Amit Shah, the Shiv Sena has said that it was ready to take on whoever challenges it. 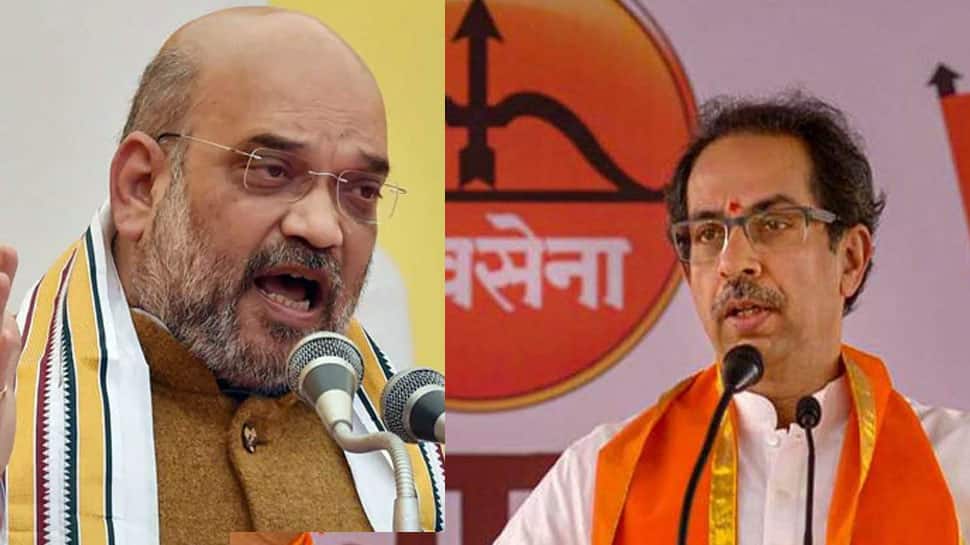 Mumbai: In a veiled attack on the Uddhav Thackeray-led Shiv Sena, Bharatiya Janata Party (BJP) president Amit Shah has said that in case of no alliance, the saffron party will thrash its former allies in the upcoming Lok Sabha polls.

This is probably for the first time that the ruling BJP has taken an assertive stand in the matter of alliance with its long-time but now estranged ally - Shiv Sena.

The statement from the BJP chief came immediately after Maharashtra Chief Minister Devendra Fadnavis set a target of winning 40 of the 48 Lok Sabha seats in the state.

Responding to it, the Shiv Sena said that it was ready to take on whoever challenges it.

Both Shah and Fadnavis addressed BJP workers from Latur, Osmanabad, Hingoli and Nanded districts in Latur city on Sunday.

"Party workers should get rid of confusion about (prospects of) alliance (with the Shiv Sena). If the allies join us, we will ensure their win, or else will defeat them too ("patak denge"). Party workers should start preparations at every booth," Amit Shah said.

The BJP chief even compared the upcoming General Elections to the third battle of Panipat, in which Maratha forces were defeated by the army of Afghan ruler Ahmed Shah Durrani (Abdali).

The BJP chief said after this battle, the country was "enslaved" for 200 years.

Endorsing Fadnavis, Shah said, "We should aim to win at least 40 out of 48 seats (in Maharashtra)."

The Sena has been regularly hitting out at the BJP despite being part of the government in the state and the Centre. Its leaders have often said they would contest the next polls on their own.

Speaking before Shah, Fadnavis said, "The party president will decide what to do with the Shiv Sena and the proposed alliance. But the BJP should aim to win 40 out of 48 Lok Sabha seats in the state."

"The victory of 2019 will be bigger than 2014. Last time we won 122 seats in (state) Assembly and received 1.50 crore votes. We need two crore votes to attain power on our own. The number of people who have benefited from the state government's policies is more than that."

The Sena and BJP had contested the 2014 Lok Sabha polls in alliance but split up at the time of Assembly elections. The Sena joined the state government later.

Late Sunday evening, the Shiv Sena hit back at the BJP, saying its plan to win 40 seats meant it would rely on manipulation of Electronic Voting Machines (EVMs).

"The Sena is ready to take on opposition. Those who attack us, we will surely defeat them," said an aide of Sena chief Uddhav Thackeray.

"The BJP does not want anybody who talks of Hindutva," the Sena leader said.