Senior politician from Maharashtra Eknath Khadse and many other leaders, who quit the opposition Bharatiya Janata Party (BJP) on Wednesday, were formally inducted into the Nationalist Congress Party (NCP) in presence of its founder Sharad Pawar on Friday. 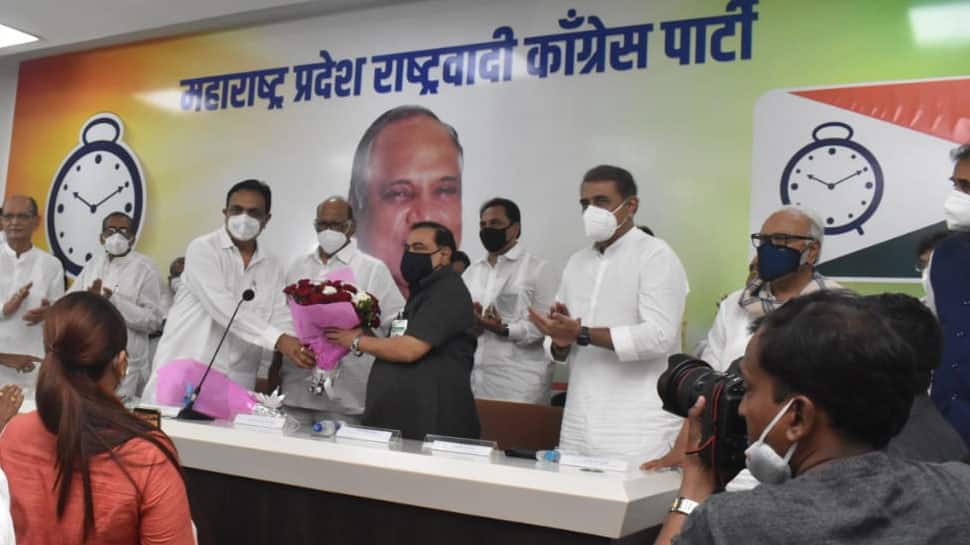 Mumbai: Senior politician from Maharashtra, Eknath Khadse and many other leaders, who had quit the opposition Bharatiya Janata Party (BJP) on Wednesday, were formally inducted into the Nationalist Congress Party (NCP) in presence of its founder Sharad Pawar on Friday.

Khadse, his daughter Rohini Khadse-Khevalkar and 72 other party workers at various levels from Jalgaon district were lustily cheered as they joined NCP, amid speculation that many others from the BJP may follow suit.

Thanking the NCP leadership for inducting him into the party fold, Khadse said that he will work hard to strengthen the party founded by Sharad Pawar across the state and elsewhere.

The veteran politician also blamed his former party BJP for not rewarding him for years of his dedication, selfless service and hard work. Khadse went to say that he was ''betrayed'' by the state BJP leaders, in a veiled reference to Devendra Fadnavis, whom his supporters had blamed for sideling him in the party.

“I struggled but never got a dagger in the back. I spent 40 years in the party but never used a woman in politics, that's not in my nature. Jayant Patil once told me that if you come to our party, they will put ED behind me,’’ he said.

He threatened by saying ''if BJP will put ED against me, I will use ‘CD’ against them''. He, however, clarified that he has not joined the party with any expectations. “I have struggled for my entire life. I have sacrificed my life for the BJP, but now I will work for NCP with full strength,” Khadse said as he joined Pawar’s party.

Welcoming him into the party, state NCP President and minister Jayant Patil said that it was "unfortunate" that such a senior leader was humiliated by the BJP on trumped-up charges despite his contributions to building the party.

"Now, they will realise that 'Tiger Zinda Hai' (Khadse) and `picture abhi baaki hai`. His entry will strengthen the NCP," Patil said, in a loaded hint of more to come after Khadse.

I welcome Eknath Khadse ji, an astute politician & an influential leader from Maharashtra into the @NCPspeaks family. His vast experience in politics will definitely strengthen the party furthermore and together we will work with the common vision of a progressive #Maharashtra. pic.twitter.com/Bxr3al2Mxk

Reacting to reports about NCP offering him a ministerial berth, party president Sharad Pawar said that nothing has been promised to Khadse. He has joined the party out of his own free will and we welcome him into the party fold, Pawar added.

Starting his political career in the 1970s, Khadse, 68, was elected the sarpanch of Kothali village in 1987. Later he was elected as a legislator for six times from 1989 till 2019 from his home town Muktainagar.

In the Shiv Sena-BJP government (1995-1999), he had served as a minister. Later he served as the Leader of Opposition before being bypassed for the post of Chief Minister when the BJP-Sena regime took office in 2014, shocking many in the political circles.