A video of the incident has gone viral on the social media in which Mahajan, Wagh and BS Patil are seen being manhandled by the party workers. 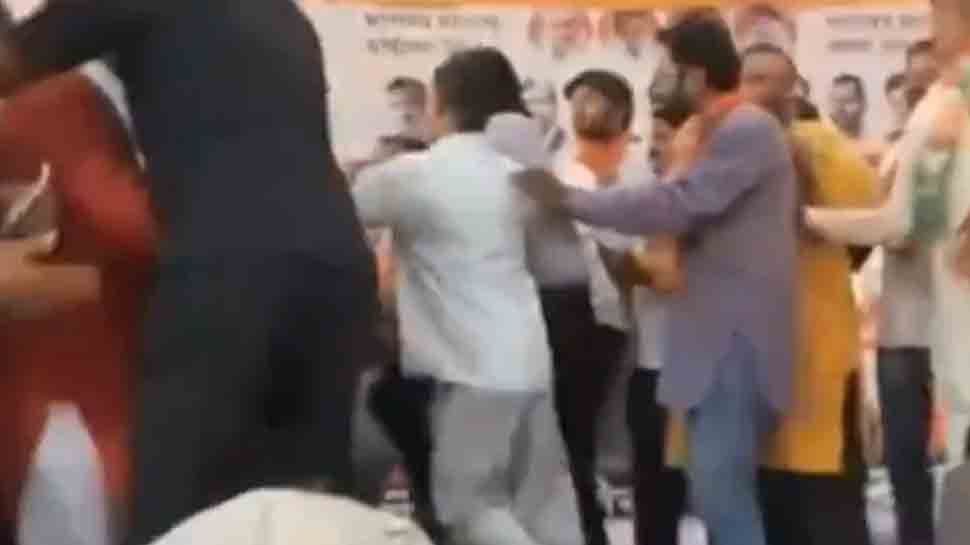 New Delhi: In a major embarrassment for Bharatiya Janata Party (BJP), two groups of party workers clashed with each other during a public meeting in Maharashtra's Amalner on Friday. In the clash, Maharashtra Minister Girish Mahajan along with former MLA BS Patil was manhandled and beaten up by activists.

BJP district president Uday Wagh, who was also present in the meeting, was thrashed by the workers.

A video of the incident has gone viral on the social media in which Mahajan, Wagh and BS Patil are seen being manhandled by the party workers. Watch the video here:

According to reports, fiery arguments and exchange of blows took place between the supporters of Uday Wagh and BS Patil over ticket distribution of Lok Sabha election. The incident took place during the public meeting of Mahajan in Jalgaon. Several Shiv Sena leaders were also present when the clash took place.

The incident comes barely a month after two BJP lawmakers from Uttar Pradesh fought each other with fists and shoes at an official meeting, in full public view. The fight between the leaders broke when a BJP MP Sharad Tripathi questioned MLA Rakesh Baghel for his name being missing from the foundation stone for a local road, to which the latter replied saying that it was his decision. Sharad Tripathi represents Sant Kabir Nagar district in Uttar Pradesh.

Baghel's reply left the Tripathi fuming leading to a fight eruption between the two at the spot. The police officers, present at the meeting, had to intervene to end the fight. A similar video of the incident had trended on the internet for days in which both lawmakers were heard hurling countless abuses at each other.